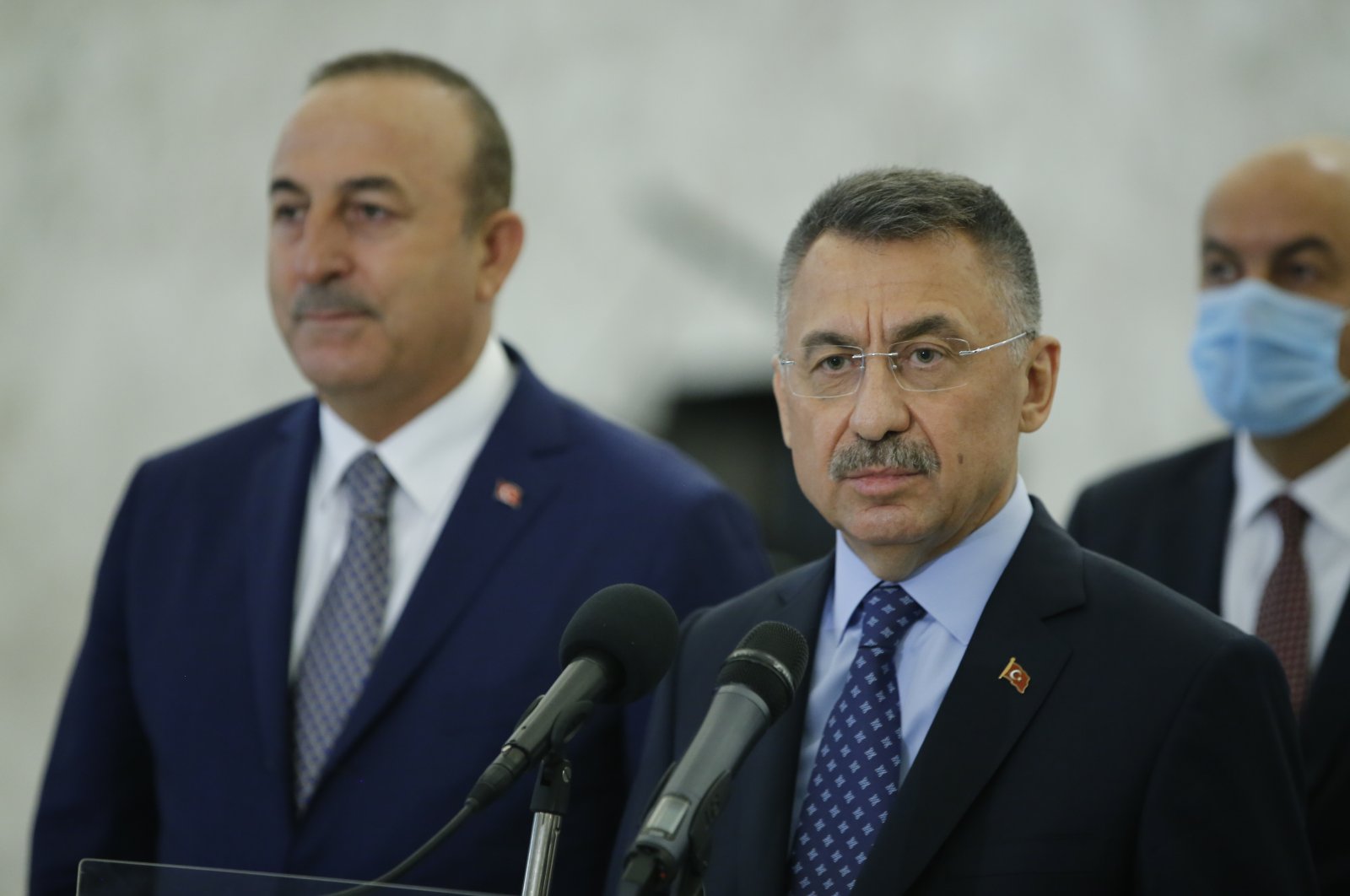 Fuat Oktay, who is visiting the Lebanese capital along with Foreign Minister Mevlüt Çavuşoğlu, said all of Turkey's hospitals and air ambulances would remain at Lebanon's service, as the country deals with the devastating fallout of Tuesday's massive blast at the port of Beirut.

A Turkish medical team and search and rescue team have been helping with recovery efforts in Lebanon since Turkish authorities sent them immediately after the blast.

Speaking after a meeting with Lebanese President Michel Aoun, Oktay said Ankara had told Lebanon that it can use the port of Mersin, on the Mediterranean coast, until Beirut port is rebuilt.

"We have said goods could be transported with smaller ships and other means of transportation from Mersin to Lebanon," he said.

"Turkey is ready to help rebuild the heavily damaged Port of Beirut and nearby buildings," the vice president said.

Oktay and Çavuşoğlu met Lebanese Prime Minister Hassan Diab, who took them to the site of the explosion.

The officials conveyed their condolences for the loss of life and property and reiterated Ankara's willingness to help out in any way.

"Our aid agency, TIKA (Turkish Cooperation and Coordination Agency), came here immediately, bringing around 400 tons of wheat to the Port of Tripoli (in northern Lebanon) to help with the food shortage. We also brought medicines and medical equipment," Oktay said.

He said that as the pandemic still posed a threat, Turkey would also continue to support mitigating its impact. "We have delivered respiratory devices as well. We will continue bringing in more aid over the days to come," he added.

Diab said he was sure that Turkey would do everything in its power to help Lebanon through this tough time, stating that the Turkish ambassador to Lebanon Hakan Çakıl was also part of the crisis committee formed in the wake of the explosion.

The officials also met the families of Turkish citizens injured in the Beirut blast, inquiring about the condition of the injured and assuring them of their complete support.

Oktay said patients could be treated in Turkey if doctors allowed.

Earlier in the week, Çavuşoğlu said six Turkish nationals had been injured in the explosion, five suffering minor injuries and one having to go into surgery.

During the visit, Çavuşoğlu also reiterated Turkey's support for the people of Lebanon.

He said Ankara stood with the Lebanese people whether Sunni, Shia or Christian.

"We also stand with our kin, the Turks and Turkmens in Lebanon and around the world. We will grant Turkish citizenship to brothers who say ‘I am Turkish, I am Turkmen,' and express their desire to become a citizen. These are our President (Recep Tayyip) Erdoğan's instructions," Çavuşoğlu said.

In a statement, he said: “We are grateful for the kind, generous, speedy, brotherly and humanitarian initiative launched by President Erdoğan and followed by vice president Fuat Oktay’s visit to Lebanon.”

According to Lebanon's health ministry, at least 158 people died and over 6,000 were injured in Tuesday's explosion, which ravaged a large section of the Lebanese capital.

The numbers, though, are likely to rise as search and rescue efforts continue.

The explosion of thousands of tons of ammonium nitrate stored at the port, apparently set off by a fire, was the biggest in Lebanon’s history and caused an estimated $10 billion-$15 billion's worth of damage, according to Beirut’s governor. Meanwhile, hundreds of thousands of people have been left homeless.

Documents that surfaced after the blast showed that for years officials had been repeatedly warned that the presence of 2,750 tons of ammonium nitrate at the port posed a grave public danger, yet no one acted to remove it. Officials have been blaming one another since the incident, and 19 people have been detained including the port’s chief, the head of Lebanon’s customs department and his predecessor.

At the site of the blast in the port, workers have been searching for dozens missing since Tuesday. Bulldozers were also seen removing debris near the giant grain silos that remain still partly standing.

The ammonium nitrate, a chemical used in fertilizers and explosives, originated from a cargo ship called MV Rhosus that had been traveling from the country of Georgia to Mozambique in 2013. It made an unscheduled detour to Beirut as the Russian shipowner was struggling with debts and hoped to earn some extra cash in Lebanon. Unable to pay port fees and reportedly leaking, the ship was impounded.

In 2014, the material was moved from the ship and placed in a warehouse at the port where it stayed until the explosion.