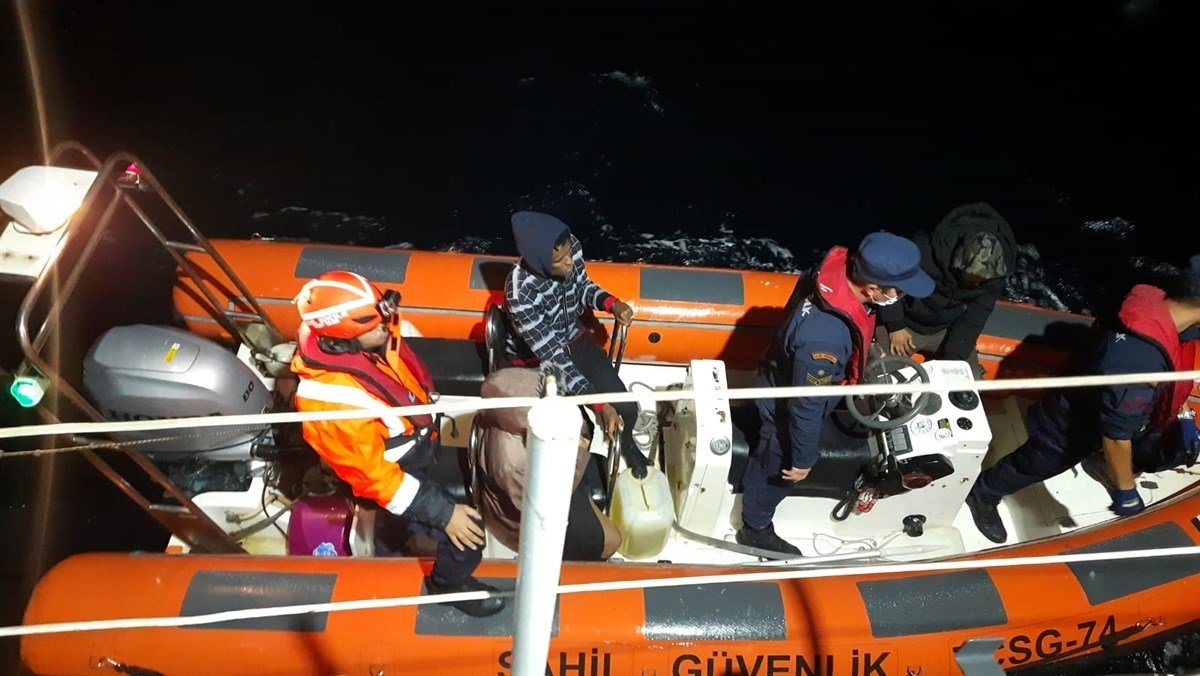 Turkish coast guard units rescued Thursday 22 irregular migrants off the Kuşadası district in western Aydın province who were pushed back by Greece.

The units were dispatched to the area after reports regarding irregular migrants in the region. The migrants, who landed on their own after being pushed back by Greek forces, were held by Turkish Coast Guard Command personnel. The irregular migrants were sent to the Provincial Directorate of Migration Management.

Meanwhile, the Turkish Coast Guard Command released a statement concerning allegations by some Greek media outlets and Greek authorities suggesting that Turkey is responsible for the incident on Oct. 26 near Chios island, which resulted in the death of four irregular migrants and the disappearance of one as a result of their boat fatally sinking.

The command said they are carrying out their duties uninterruptedly within the scope of national and international law to prevent irregular migration, defining Greece’s allegations as “baseless.”

“Despite all the efforts of the Turkish Coast Guard Command and security forces, there have been many incidents in which Greek forces pushed back irregular migrants in the Aegean Sea, subjecting them to inhumane treatment, taking their valuable possessions and forcing them to return to the sea while handcuffed and without a life vest. These incidents have been reported many times by international media,” the command said.

It added that during the incident near Chios island, a coast guard boat was immediately dispatched to the scene following the notification that an irregular migrant boat had sunk. The incident took place in Greek territorial waters and it was seen that the Greek authorities were carrying out search and rescue activities.

Speaking about the issue, Greece's migration minister said Wednesday the fatal sinking of a migrant boat in the Aegean Sea showed the flaws of a deal between the European Union and Turkey to stem unchecked westward migratory flows.

Notis Mitarachi said the victims – two children and two adults from Somalia – should never have been allowed to leave the Turkish coast in an overcrowded smuggling dinghy.

Mitarachi added that Somalis in particular “fly to Turkey with visas, are well received in Turkey ... and have all the characteristics of somebody that has been provided with a safe place to be. Therefore we see absolutely no reason for them to go to Greece or to other EU countries.”

Greece has designated Turkey a safe country for Somalis, Afghans, Syrians, Pakistanis and Bangladeshis – nationalities that figure prominently among people crossing illegally from Turkey to Greece.

The minister said those facing danger in their own country should “obviously” be entitled to seek asylum, but claimed that it does not give them the right to travel through many countries to find out what “fits (them) best.”

"Some of these reports are shocking, and I'm extremely concerned," Ylva Johansson, the EU commissioner for home affairs, told reporters, citing a joint investigation by media outlets Der Spiegel, ARD and Liberation.

There is "mounting evidence" of pushbacks of asylum-seekers from Greece to Turkey recently, a United Nations human rights office spokesperson also said earlier this month.