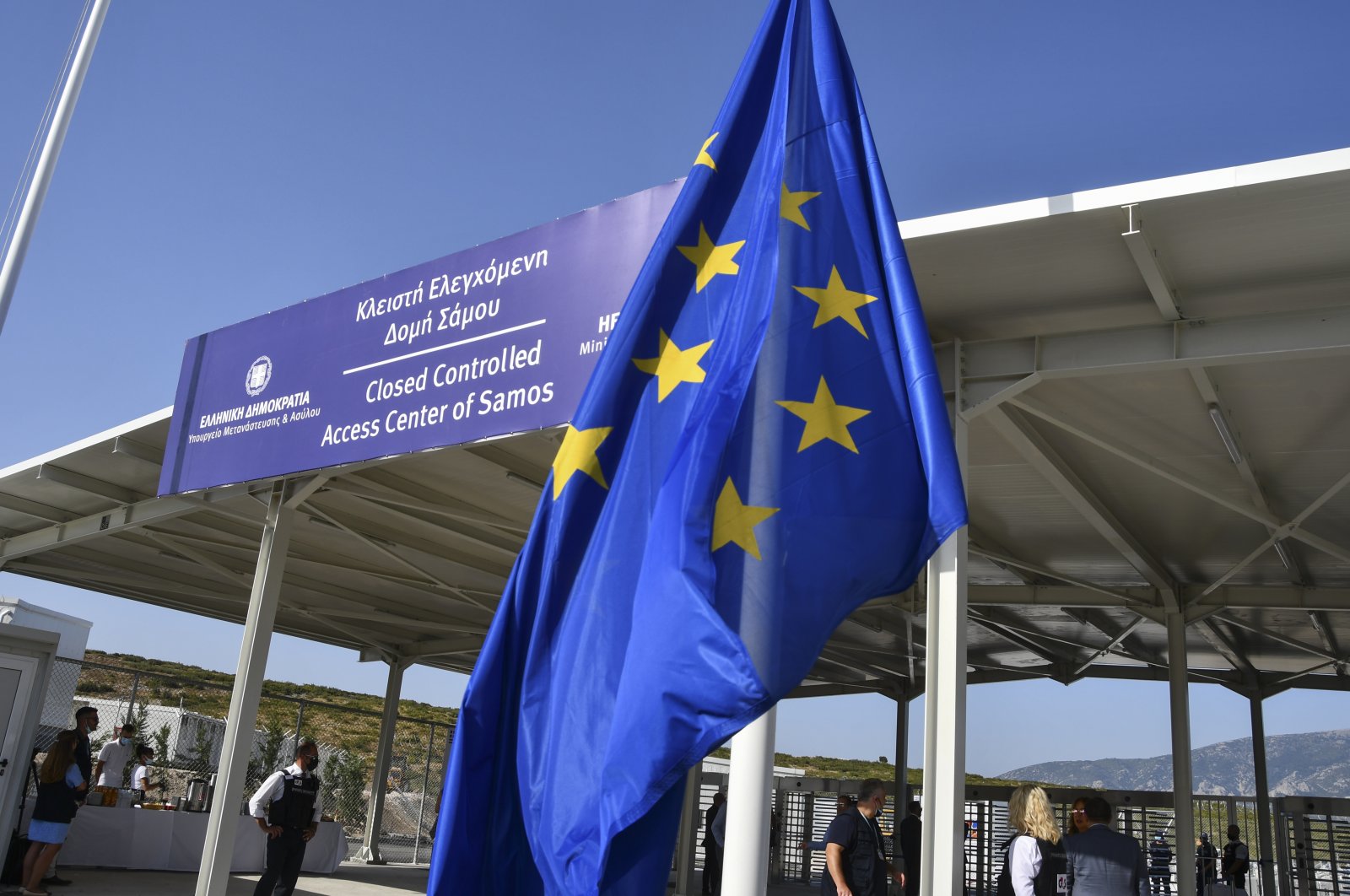 A view of the entrance of the new multi-purpose reception and identification migrant center near the town of Vathy, on the eastern Aegean island of Samos, Greece, Sept. 18, 2021. (AP Photo)
by DAILY SABAH WITH AGENCIES
Oct 08, 2021 10:04 am

"I must say that the Croatian government takes this very seriously, they are going to immediately investigate," said Johansson while arriving for a meeting of EU interior ministers in Luxembourg.

"My discussion with the Greek minister was different, and I have made clear that I will not accept that Greece (does) not do investigations on this," she added. "We have to protect our external borders, but we also have to protect our values, the rule of law and fundamental rights. And this is absolutely possible to do together."

The EU on Thursday voiced serious concerns over reports of illegal, sometimes violent, migrant pushbacks at the bloc's borders and called for probes in Greece and Croatia.

"Some of these reports are shocking and I'm extremely concerned," she said.

"There seems to be, in (this) case, some kind of orchestration of violence at our external borders, and there seems to be convincing evidence of misuse of (EU) funds," Johansson continued, referring to the fact that authorities of these countries have received significant financial support from the EU for external border management.

The commissioner promised that she would "raise the reports directly" when meeting the Greek Minister for Migration Notis Mitarachi and Croatia's Interior Affairs Minister Davor Bozinovic.

"This needs to be investigated."

The country's special coastguard units have allegedly intercepted migrant boats in the Aegean Sea and set them adrift on orange rafts, some paid for with EU cash.

Amnesty International labelled it "alarming" that Brussels "continues to close its eyes to flagrant violations of EU law and even continues to finance police and border operations in some of these countries."

"The (European) Commission strongly opposes any pushback practices and has repeatedly emphasized that any such practices are illegal," Adalbert Jahnz, spokesperson on home affairs and citizenship, said at a news briefing earlier on Thursday.

He called the reports an unacceptable and "very concerning mistreatment of migrants, asylum seekers and refugees," adding that the allegations "must be investigated" particularly in terms of respect for fundamental rights.

Jahnz also explained that the EU executive body "continues to have serious concerns, based on evidence and reports, presented by both the European Parliament and UNHCR (United Nations High Commissioner for Refugees)."

He noted that it is beyond the European Commission's power to investigate acts of national authorities, but asserted that it has been helping member states address "reports of unlawful activities and use extended borders."

Turkey and Greece have been key transit points for migrants looking to cross into Europe, fleeing war and persecution to start new lives. Turkey has accused Greece of large-scale pushbacks and summary deportations without migrants being given access to asylum procedures, which is a violation of international law. It also accuses the EU of turning a blind eye to this blatant abuse of human rights.

In a new report, the EU Agency for Fundamental Rights (FRA) revealed recently that migrants at EU borders still face difficult conditions and violations of rights in detention and reception centers. The report also noted that pushing migrants back to Turkey has become the de facto border policy of Greece and that torture, ill-treatment and pushbacks continue.