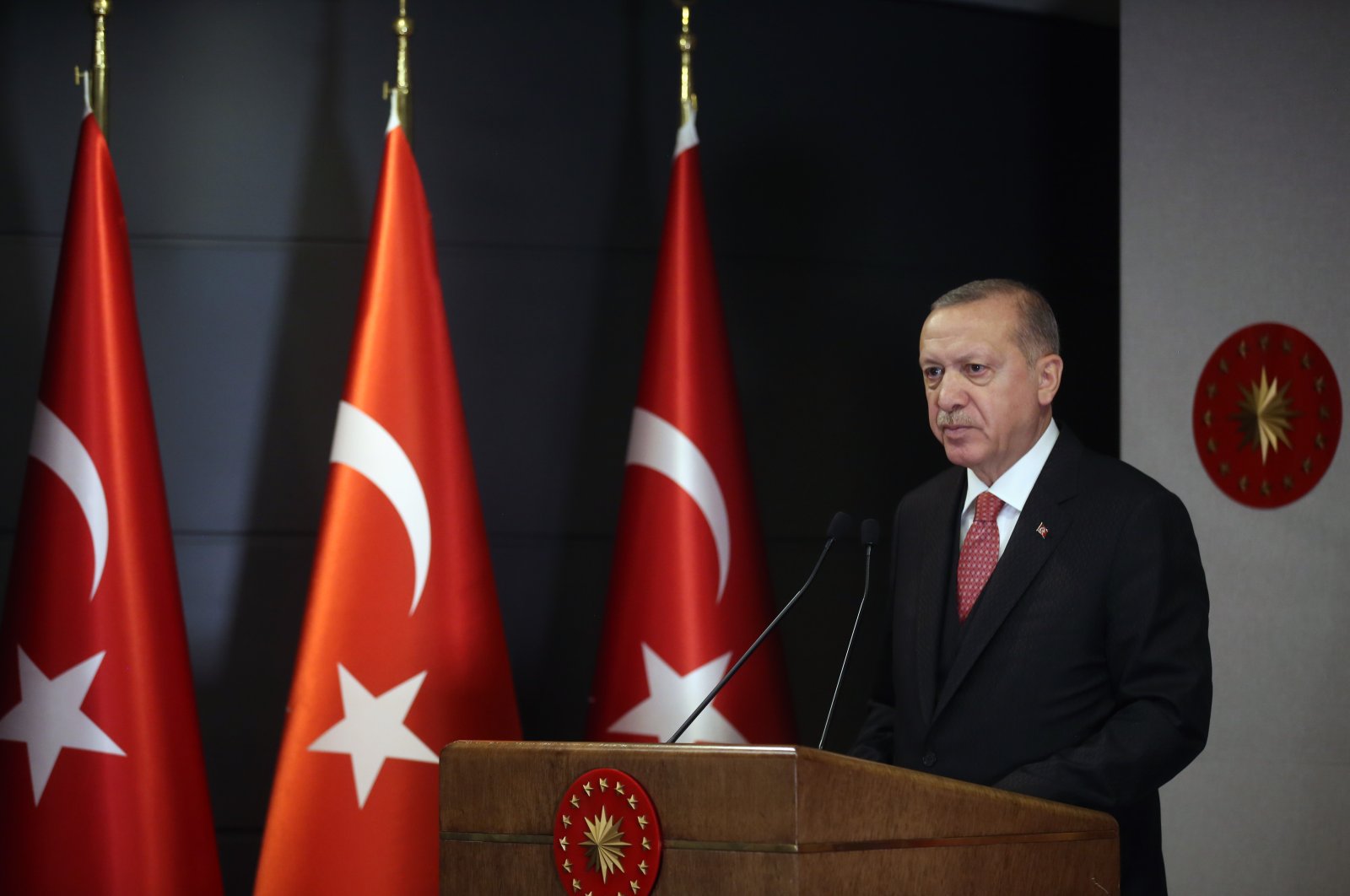 While Turkey was expected to gradually relax restrictions against the spread of COVID-19 following the success of earlier measures, Erdoğan detailed some of the early normalization programs as the spreading pace began slowing over the past two weeks.

Noting that Turkey "will gradually return to normal life," Erdoğan said it will be "a new normal." He warned that tougher steps would be taken if people fail to follow the rules.

There will be some relief for those aged 65 years and above and below 20, who have been under stay-at-home orders for more than a month. As Erdoğan explained, these citizens will be allowed to go outside for four hours, one day a week starting this weekend.

Since March 21, around 7.5 million senior citizens have been under lockdown, forbidden from going outside in a measure taken to stop the spread of the new coronavirus.
The same restriction was brought in by the government for people aged under 20 on April 4.

Erdoğan also said shopping malls, barber shops and some stores would be allowed to open on May 11 as long as they abided by normalization rules, adding that universities would return to their academic calendar as of June 15. He warned, however, that the government would impose much harsher measures if the normalization plan was not followed.

Turkey will also lift coronavirus travel restrictions for Antalya, Aydın, Erzurum, Hatay, Malatya, Mersin and Muğla. Travel to and from these seven provinces will be permitted from Monday night. Entrance and exit bans will stay in place for the remaining 24, which includes Turkey's economic and cultural hub of Istanbul and national capital Ankara, for 15 days.

Erdoğan added that a National Solidarity Campaign to raise money to fight the virus and its economic impact had netted some TL 1.91 billion ($271 million) in donations.

Turkey has delivered coronavirus aid to at least 57 countries, including the U.S., Italy, Spain and the U.K., and remains the world's third-largest provider of humanitarian aid during the pandemic.

A total of 86,166 people have recovered so far from the novel coronavirus in Turkey, including 5,015 on Monday, the country's Health Minister said.

The death toll from the pandemic climbed to 3,461 as Turkey saw 64 more fatalities in the past 24 hours, Fahrettin Koca said on Twitter.

Meanwhile, over 35,771 additional tests have been conducted in the last 24 hours, bringing the total number to 1.17 million.

The pandemic has killed over 248,000 people, with total infections reaching over 3.53 million, while more than 1.13 million have recovered from the disease, according to figures compiled by Johns Hopkins University.

Erdoğan also touched upon the latest situation in Libya, saying that eastern-based forces loyal to putschist Gen. Khalifa Haftar have entered a “regression” phase in the conflict with the U.N.-supported government in Tripoli, following a series of setbacks.

Turkey heavily backs the Government of National Accord (GNA), the recognized Tripoli government, with a variety of resources, including military aid, against the illegitimate Haftar forces. Erdoğan vowed continued support for the U.N. backed government in Libya to transform the area into a region of peace.

"The safety of Libya and the peace and well-being of the Libyan people are the key to the stability of all North Africa and the Mediterranean,” he added.

He also said thanks to Turkey's support for the legitimate government the putschist Haftar is losing ground.

Countries that provide him unlimited financial support and weapons will not be enough to save Haftar, who also faces opposition from locals in the lands he occupies with every step he takes, said Erdoğan, adding: "Hopefully, we will soon receive new good news from Libya."

Haftar’s forces are backed by the United Arab Emirates, Egypt and Russia. For months his forces, bolstered by shipments of powerful missiles, jets and drones, held an advantage over the coalition of fractious militias while besieging the U.N.-supported government in Tripoli. But Turkey’s escalating military support for its Libyan allies has shifted momentum of the conflict.

Last week, the U.N.-supported government rejected a unilateral cease-fire declared by Haftar’s forces for the Muslim holy month of Ramadan, citing the collapse of past agreements.

Following the ouster of late ruler Muammar Gaddafi in 2011, Libya's government was founded in 2015 under a UN-led political deal. Since April 2019, the government has been under attack by Haftar's forces, based in eastern Libya, and more than 1,000 people have been killed in the violence.

Regarding the Idlib safe zone in northwestern Syria, Erdoğan said that Turkey would no longer tolerate terrorist harassment or a ramping-up of attacks that flout current international agreements.

Terrorist groups are trying to exploit Turkey's preoccupation with the coronavirus pandemic to step up attacks both within Turkey's borders and beyond, Erdoğan said. "This attitude alone is enough to show how far the terrorist group is from humanity," he added.

Erdoğan said the Turkish Armed Forces have been pursuing and neutralizing terrorists non-stop, adding that its operations across the border would also continue in haste.

"We are closely monitoring every step members of the terrorist group make across a wide expanse of northern Iraq and Syria."

He stressed that Turkey would continue to immediately target members of the terrorist group attempting to infiltrate secured areas in Syria.

Since 2016, Turkey has led a trio of successful operations across its border into northern Syria to prevent the formation of a terror corridor, enabling the peaceful resettlement of locals and protecting civilians from attacks: Euphrates Shield (2016), Olive Branch (2018), and Peace Spring (2019).

"We invite countries that have influence in the region to comply with our permanent agreements, to keep the terrorist group outside the determined borders and to prevent regime attacks," Erdoğan added.

He stressed that, unfortunately, no country had been "fully fulfilling its promise" in this regard.

If those who support the terrorist group and regime cannot control them, he said, Turkey alone would bring them to their knees.

Idlib falls within a de-escalation zone laid out in a deal between Turkey and Russia in late 2018 and subsequent cease-fires. The Bashar Assad regime and its allies, however, have consistently broken the terms of the cease-fires, launching frequent attacks inside the zone.