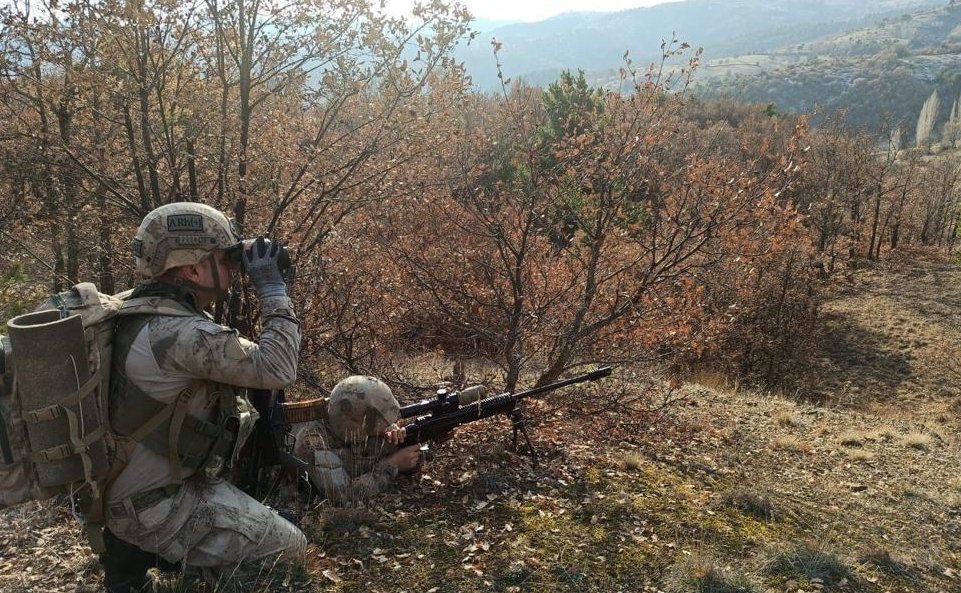 Turkish soldiers during an operation against PKK terrorists in central Sivas province, Turkey, Jan. 5, 2021.
by DAILY SABAH WITH AA Feb 19, 2021 8:04 am
RECOMMENDED

Turkish Interior Ministry said Thursday that as a result of the persuasion works carried out by the General Directorate of Security and the Gendarmerie General Command, with coordination of the ministry, two members who fled from the terrorist organization PKK surrendered to the security forces.

It was revealed that these members of the organization joined the PKK in 2014 and 2019 and operated in Iraq and Syria. Thus, the number of those who surrendered this year reached 27.

The Interior Ministry disclosed that a total of 321 PKK terrorists surrendered in 2020.

Interior Ministry statistics show in 2016 at least 76 terrorists had capitulated to the Turkish security forces. These numbers kept increasing in the subsequent years. In 2017 the number rose to 105, in 2018 it reached 165. But in 2019 the number gained an astonishing momentum, virtually doubling to 273.

Once the terrorists surrender to security forces, they are reintegrated and provided with various opportunities, including the right to education as well as the freedom to live without intimidation or ill-treatment. They are given opportunities for judicial assistance and can communicate with their families when the need arises.

The terrorists are given opportunities to confess and explain the ordeal they endured. This helps them gain some benefits from remorse which can ultimately lessen their level of punishment.

Persuasion, however, is not the sole strategy used by the Turkish authorities in convincing terrorists to surrender. Those who manage to run away from terrorist camps in the midst of Turkish military operations and those who have nowhere to go eventually tend to surrender to the security forces.

The number of people joining the PKK organization has significantly decreased over the years, to the extent that the majority of these people have no or little interest in joining them. According to statistics, 703 people joined PKK in 2016, in 2017 it declined to 161 and in 2018 it was 136. In 2019 this number further declined to 108.

The Interior Ministry has always raised its voice against the terrorists for their heinous attacks on innocent civilians.