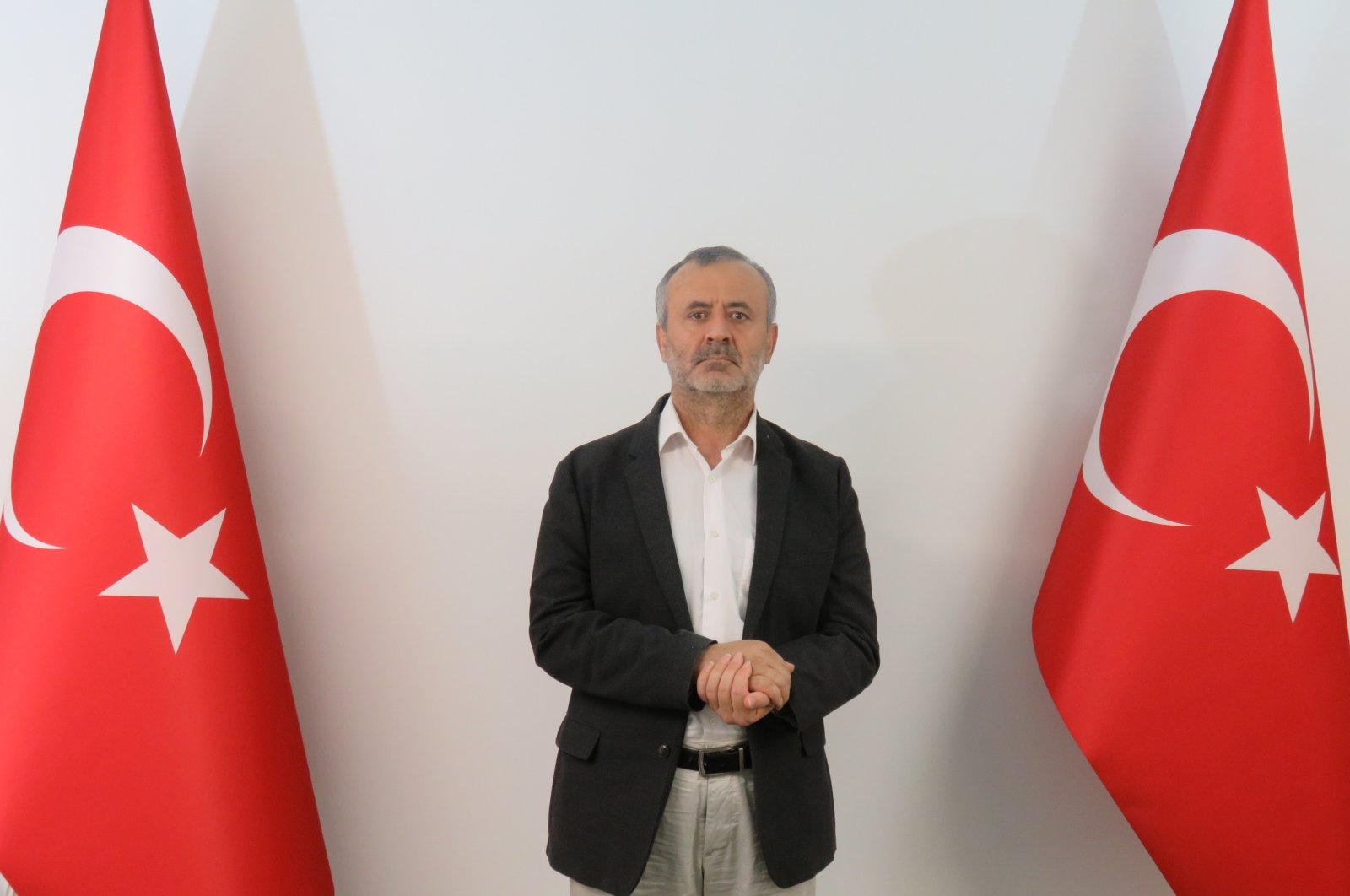 Orhan Inandı poses between two Turkish flags in this photo handed out to the media after he was brought to Turkey, July 5, 2021. (AA Photo)
by DAILY SABAH Jul 12, 2021 4:05 pm
RECOMMENDED

Gülenist Terror Group (FETÖ) member Orhan Inandı, who was recently detained in an operation by Turkey’s National Intelligence Organization (MIT), confessed to being the senior figure responsible for FETÖ’s operations in Central Asia.

Inandı was transferred to court after procedures at Ankara Police Directorate. In his testimony, he confessed that he works for the terrorist group.

Inandı had an arrest warrant on charges of terrorism. Security sources say he rose to the rank of “Kyrgyzstan chief” in the terrorist group in 2001 before he was promoted to the rank of leader for FETÖ for a region covering Kyrgyzstan, Azerbaijan, Kazakhstan, Turkmenistan, Tajikistan and Uzbekistan in 2017.

Security sources say he was a frequent visitor to FETÖ leader Fetullah Gülen’s compound in the U.S. state of Pennsylvania, and last visited the place in March 2021. He also had connections with top figures of the group, including Mustafa Özcan, Naci Tosun and Barbaros Kocakurt. Investigations show he was an active user of Bylock, developed and exclusively used by the group to relay messages of senior cadres to the members. Upon instructions of the group’s leaders, Inandı helped to arrange shelter in Kyrgyzstan for FETÖ members who fled Turkey. He also arranged for 25 top FETÖ members, including Mustafa Özcan and Ali Çelik, former CEO of Bank Asya, a now-defunct lender associated with the group, to have Kyrgyz passports by “illegal means,” security sources said.

Inandı worked in several positions within the group between 1985 and 1995 before gradually rising in the ranks. He also had contacts with Adil Öksüz, the fugitive mastermind of the 2016 coup attempt, attending his meetings with other FETÖ members.

In his confessions, Inandı, who abstained from calling FETÖ a terrorist group, said he has been part of the group for 36 years. He detailed all the work he had done for FETÖ to investigators and provided information about the group's network abroad and the state of FETÖ members following the July 15, 2016 coup attempt.

He said he has known Öksüz since the time they were studying at a university. He spoke about how he was assigned to Kyrgyzstan by the terrorist group and gave details about his visits to Gülen in the United States. He said that the group fell into a crisis following the coup attempt and said they were unable to take care of members on the run as most assets of the group members and financial sources in Turkey were seized by authorities.

He said the group was selling properties it owned to cover the expenses of members and most members were living in fear of getting caught. Inandi also spoke about how Kaynak Holding, a now-defunct business conglomerate seized by authorities for its links to FETÖ was used to secretly transfer money abroad to finance the terrorist group.

The terrorist group is accused of planting infiltrators throughout Turkey's governance structure, from the judiciary and law enforcement to the military. It was also responsible for carrying out two coup attempts disguised as anti-graft probes in 2013. After a plot by FETÖ-linked judiciary members and police chiefs targeting people close to the government in so-called corruption probes was uncovered, the group faced heightened scrutiny.

Yet, it was not until the 2016 coup attempt that FETÖ saw the biggest crackdown against its activities. Tens of thousands of people have been detained and arrested for their links to the terrorist group in operations carried out in the aftermath of the failed coup attempt.

FETÖ maintains a vast network of schools and other educational facilities throughout the world, with the United States being the terrorist group's primary focus. These facilities, often presented as Turkish or international schools, primarily recruit FETÖ members and sympathizers as teachers and administrators. FETÖ schools are often accused of money laundering and financing the shadowy group's activities through the schools' profits and deals with FETÖ-affiliated businesses and vendors.

Ankara's relentless efforts in taking over Turkish-branded institutions from FETÖ since 2014 have found some success, but the terrorists' networks in Europe and the U.S. remain untouched.