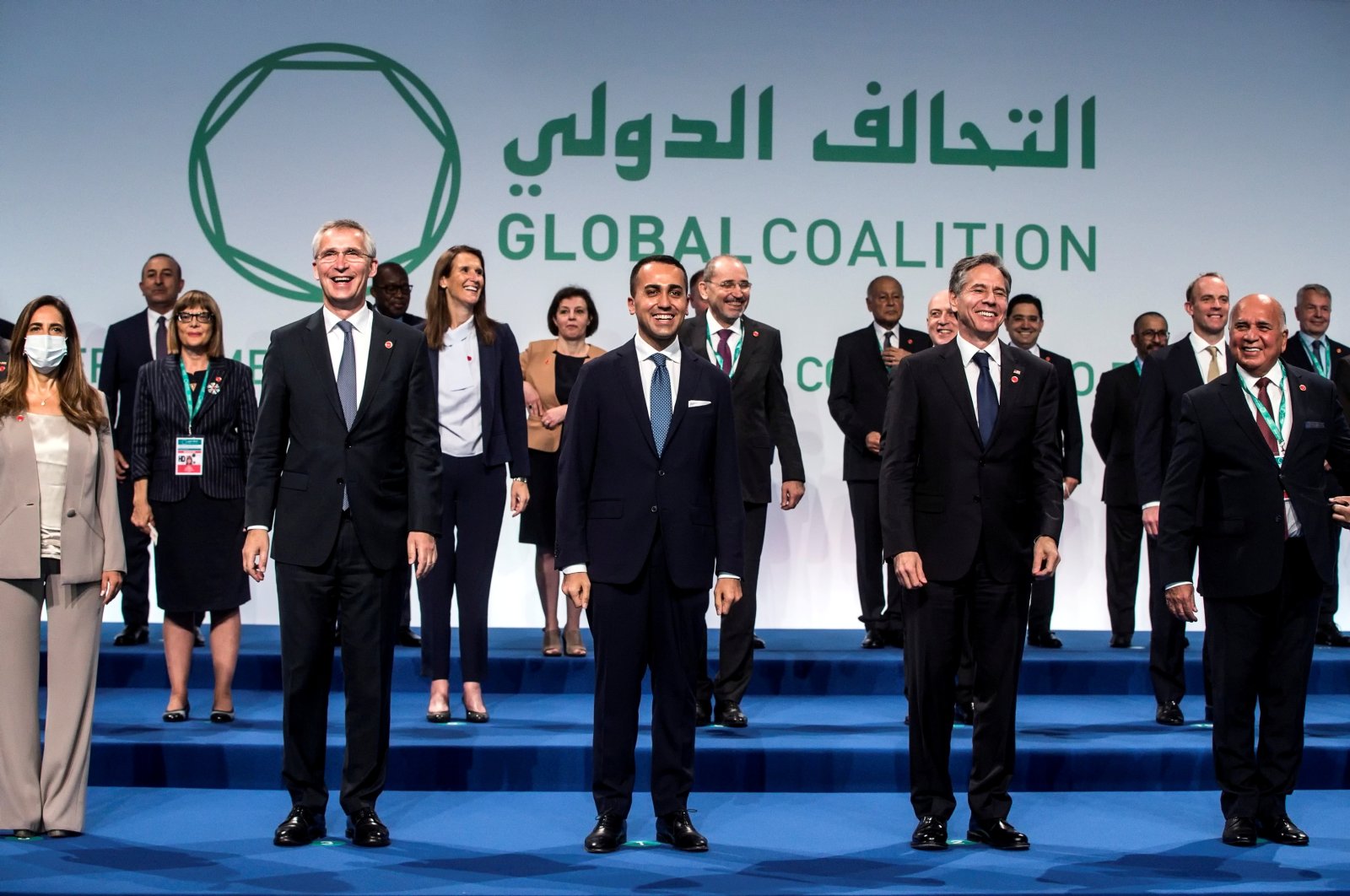 Participants pose for a group photo at the Ministerial Meeting of the Global Coalition to Defeat Daesh, in Rome, Italy, June 28, 2021. (REUTERS Photo)
by DAILY SABAH WITH AGENCIES Jun 28, 2021 1:14 pm
RECOMMENDED

The meeting was organized by Italy with the partnership of the United States and hosted high-level representatives from nearly 80 countries and international organizations.

At Meeting of Global @Coalition to Defeat DAESH, shared our views on an effective fight against DAESH.

As diplomatic sources stated, Çavuşoğlu was also expected to underline the fact that Turkey is the country that conducted the most efficient fight against Deash and to reiterate that there is no excuse for the United States to still support the PKK terrorist group’s Syrian branch, the YPG, while the Daesh’s active presence in Syria almost does not exist anymore.

Ankara states at every meeting that a terrorist organization cannot be destroyed by giving support to another terrorist organization. Sources say that the focus is on areas of cooperation in the negotiations with the United States, but the Turkish side has the understanding that "we should also talk about the disagreements, if we do not overcome these issues, there may be blockages in the areas of cooperation."

The greatest challenge that Turkey-U.S. relations face is not the problem of Ankara’s purchase of the Russian S-400 missile defense system but rather Washington’s support for the PKK terrorist organization’s Syrian wing the YPG, Defense Minister Hulusi Akar stated recently.

Turkish security forces have nabbed at least 850 suspects with links to Daesh in the first three months of 2021, dealing a heavy blow to the terrorist group's presence in the country and its activities in the region. As one of the first countries that recognized Daesh as a terrorist group in 2013, Turkey has been frequently conducting domestic and cross-border operations against the group for years in order to eliminate a major global terrorism threat.

As President Recep Tayyip Erdoğan stated recently, Turkey has so far eliminated more than 4,000 Daesh terrorists in both domestic and cross-border operations. He also said during a NATO summit that Turkey was left alone by its allies and partners in its fight against terrorism and underlined that terrorism is one of the greatest obstacles to stability.

In his speech at the opening of the meeting, Di Maio said: "Daesh has been defeated in terms of losing its territory, but it has not been eradicated. There is still much to be done. Therefore, Italy is considering increasing its participation in NATO missions in Iraq."

He also called on the coalition to form a new working group to address "the growing threat stemming from Daesh in Africa".

Expressing that they came together for an important event today, Blinken said: "Significant successes have been achieved against Daesh. We made progress against Daesh because we worked together, but there is still much to be done."

Blinken also said that 10,000 Daesh fighters continue to be held in detention in camps run by the YPG and that this situation was "untenable."

He said Washington continued to urge countries, including the 78 member countries of the coalition against Daesh, to take back their citizens who had joined the group.

"This situation is simply untenable. It just can't persist indefinitely. The United States continues to urge countries of origin, including coalition partners, to repatriate, rehabilitate, and where applicable, prosecute their citizens," Blinken said in his opening remarks.

Another key element of defeating Daesh on a permanent basis required addressing the threats from the group outside Iraq and Syria, and namely in Africa, Blinken said.

France and Britain, two of the closest U.S. allies, have been major holdouts against calls to bring back their citizens, which were also made by former President Donald Trump's administration.

Both nations have painful experiences with attacks and see little incentive and plenty of political cost to bringing back radicalized citizens who are already jailed overseas.

Blinken praised Italy as one of the few Western European nations to repatriate its citizens and also hailed efforts by Central Asian nations such as Kazakhstan, which he said had brought back 600 fighters and their family members and put them in rehabilitation programs.

Turkey has also criticized Western countries for refusing to repatriate their citizens who joined Daesh in Syria and Iraq, stripping some of them of their citizenship.

According to a Human Rights Watch (HRW) report in March, the YPG forces are holding more than 63,000 women and children of suspected Daesh fighters from more than 60 countries in two camps surrounded by barbed wire.

Originally an offshoot of al-Qaida, Daesh seized large swathes of Iraq and Syria from 2014, imposing a reign of terror with public beheadings and attacks by supporters abroad.

Daesh was declared militarily defeated in 2017 but has since waged a steady insurgency across parts of northern Iraq and a porous border with neighboring Syria.

Militant groups linked to al-Qaida and Daesh have also grown stronger in recent years, despite the deployment of thousands of regional, Western and U.N. troops across West Africa's Sahel region.

The meeting in Rome, which was the first face-to-face meeting since the pandemic started, aimed to confirm the coherence of the coalition in the absolute defeat of Daesh, its commitment to stabilize the liberated areas in Syria and Iraq, and to consolidate the cooperation in the working groups.