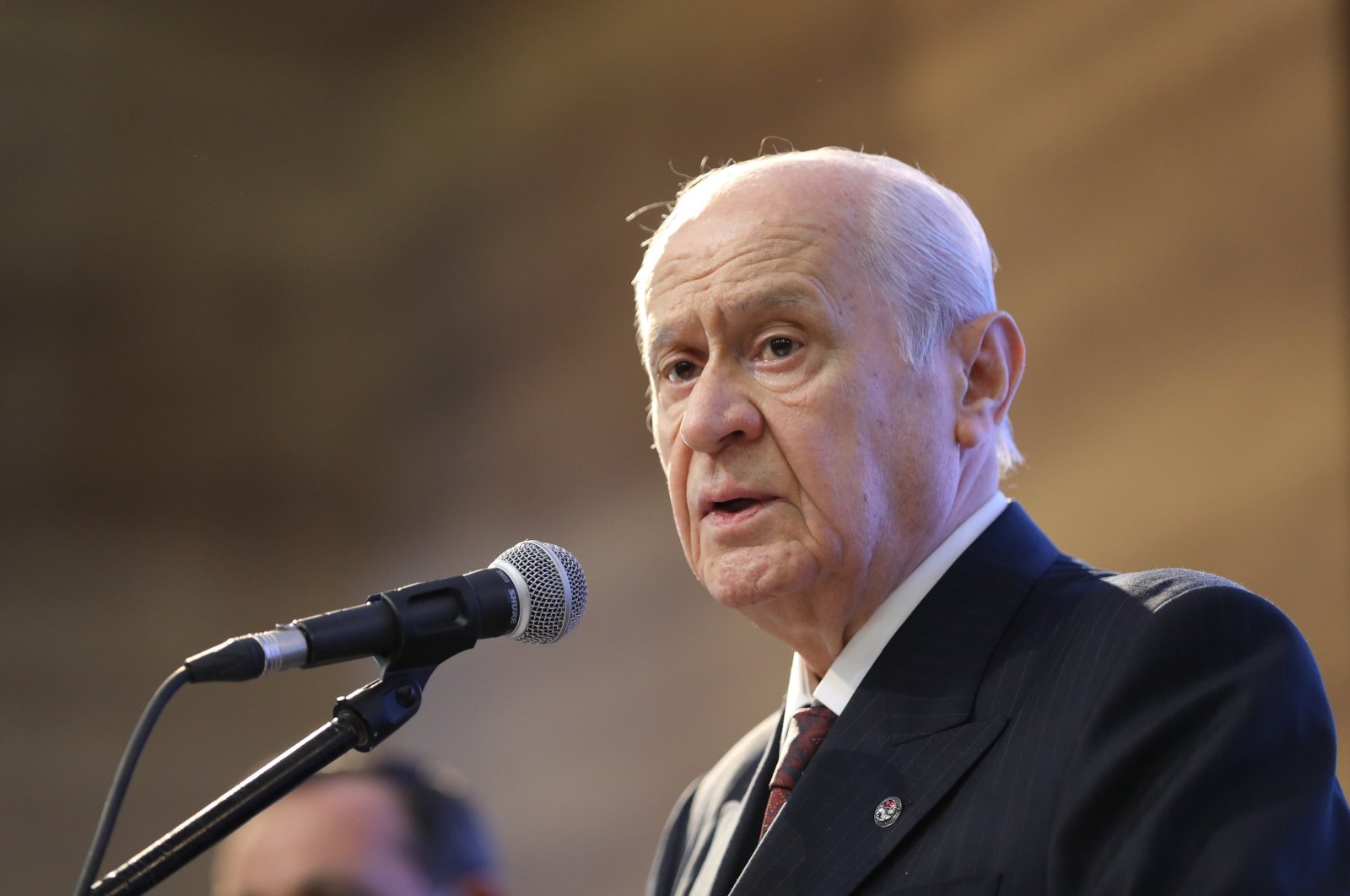 Saying that the CHP administration's rhetoric has turned into a national security threat, Bahçeli said the main opposition has turned away from its founding principles laid by Mustafa Kemal Atatürk, as he accused the party of losing its "ethical metabolism."

Kılıçdaroğlu had said that a "legitimate organ" was necessary to solve the Kurdish question.

"We can see the HDP as a legitimate organ," he said in a recently released documentary.

HDP Van deputy Sezai Temelli responded to Kılıçdaroğlu's remarks by saying that the terrorist PKK's jailed leader Abdullah Öcalan, who is currently serving a life sentence at Imralı prison, was the right address to solve the issue.

Bahçeli noted that Temelli's message has proved "which side" the main opposition leader is on and that he is attempting to legitimize the "unethical partnership."

He also called on the party to clarify whether they held talks with the terrorists in their visit to northern Iraq last month, where a delegation held a meeting with the Kurdistan Regional Government (KRG).

"The HDP is not a legitimate actor, but a masked version of the PKK with a certificate of election," the MHP chair said, adding that whoever favors and tolerates terrorist ideologies are making a fatal political mistake.

The HDP has been accused of close ideological and political links with the PKK terrorist organization, which was founded in 1978 and has been conducting terrorist attacks against the state since 1984. As a result of PKK terrorism, nearly 40,000 people have been killed in more than three decades. Currently the HDP's former co-chair and presidential candidate, Selahattin Demirtaş, is held in prison for terrorism-related charges.

The party's role in the riots of Oct. 6-7, 2014, was also included in the indictment. In October 2014, amid a Daesh siege on the YPG in Ain al-Arab, also known as Kobani, Demirtaş and other HDP officials called for riots.

In the subsequent events known as the Oct. 6-7 "Kobani riots," 31 people were killed and some 350 others were injured in clashes between pro-PKK and conservative Kurdish groups and security forces throughout Turkey, especially in the southeast.

During the violence, 16-year-old Yasin Börü was brutally murdered by the terrorist group's supporters in southeastern Diyarbakır when he was distributing meat for low-income families. Following the events, more than 1,600 investigations were launched, 894 suspects were detained and 386 of them were imprisoned. Eighteen of the 41 suspects were sentenced to life in prison for the murder of Börü and his friends.

The Kurdish citizens of Turkey are as diverse as Turkish society when it comes to political and cultural affiliations. While there are many Kurds who identify themselves as traditionally conservative Sunni Muslims and prioritize their religious identity, there are also secular, center-left and radical-left Kurds who prioritize their ethnic identity. While the former has traditionally supported the Justice and Development Party (AK Party) in recent decades, the latter has traditionally supported the HDP. Major Turkish parties, such as the main opposition CHP and the MHP, have so far not been successful in attracting the Kurdish vote in the southeastern region of Turkey.

AK Party governments in the past decade or so have underlined that they do not have an "issue" with the Kurds, and they have supported their rhetoric through a number of social and political reforms regarding the rights of the Kurds and Kurdish identity. However, Erdoğan and AK Party governments have said that there is a problem of terror in the country, referring to the PKK terrorist group, and underlined that the PKK is not representative of all Kurds. The Turkish president has vowed that the threat posed by PKK terrorists will be eliminated from the country; this is not a step against the Kurds. Rather, Erdoğan says that the elimination of the PKK will help the Kurds get relief from the oppression the PKK has imposed on the people of the region.