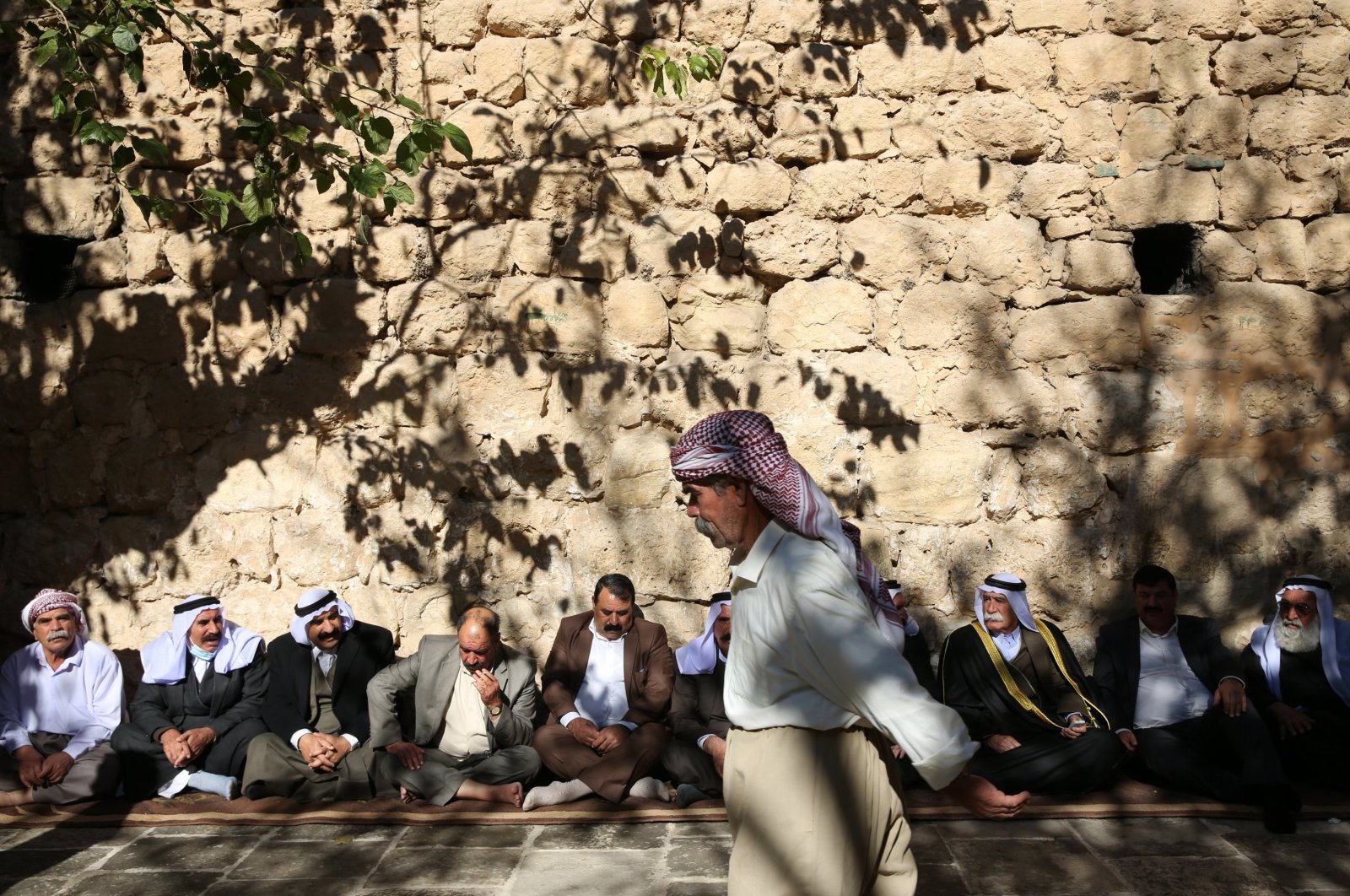 Members of the Yazidi community arrive to attend the inauguration ceremony of a new Yazidi spiritual leader at the Lalish Temple in the southeast of Duhok, Iraq, Nov. 18, 2020. (EPA Photo)
by DAILY SABAH WITH AA Apr 02, 2021 8:10 am
RECOMMENDED

The Yazidi community of northern Iraq's Sinjar is unable to return to their homes because of oppression in the region by the PKK and the terrorist group's extensions, Turkey's consul general in Irbil said Thursday, while new footage once again revealed how the PKK terrorizes local people by using the language of threats and the method of torture.

Hakan Karaçay paid a visit to Yazidi Mir (community leader) Hazim Tahsin Beg and spiritual leader Baba Sheikh in the Shehan District of Duhok province, where the Yazidis took refuge after escaping from Sinjar district after the Daesh terrorist group took control of the region.

The mir and Baba Sheikh thanked Turkey for its assistance to the community, Karaçay told Anadolu Agency (AA).

The Yazidis welcome the humanitarian aid provided by Turkey, regardless of ethnic origin, religion, language and race, Karaçay said.

Yazidi people living in the camps in Duhok widely believe that the Sinjar district is still not a safe place to return due to the PKK's presence in the region, he noted.

Underlining that internally displaced Yazidis are currently in a poor condition, Mir Hazim said: "We expect the Sinjar deal between Irbil and Baghdad to be implemented."

The Sinjar deal, signed under the auspices of the United Nations in October last year between the central government in Baghdad and the Kurdish Regional Government (KRG) on the status of the region, envisages clearing the region of PKK terrorists.

Following the deal, the Turkish Foreign Ministry said in a statement that it hoped the agreement would be carried out in a way that enables the reinstatement of Iraqi authorities' control in Sinjar, the eradication of Daesh and PKK terrorist organizations and their extensions in the region and ensure the safe return of Yazidis and the other people of the region who have been subject to grave oppression and persecution, first at the hands of Daesh and then by the PKK.

Sinjar is wedged between Turkey to the north and Syria to the west, making it a highly strategic zone long coveted by both the central government in Baghdad and the KRG in the north.

Meanwhile, new footage obtained by the Demiören News Agency (DHA) showed that the PKK tortured two Yazidi people who were abducted by the terrorist group.

In the footage, it was seen that the terrorist group tortured two Yazidis tied to a ceiling with a rope and whipped, in a training camp in the Sinjar region.

Speaking to DHA, Ibrahim Hudeyda, a spokesperson for the Yazidi community, reiterated their call for the PKK to be cleared from the region and said that the terror group's presence in the area poses a major threat for regional security and stability.

Stating that there are many PKK members in the area who are holding numerous Yazidis, Hudeyda said that the U.N. and its agencies were informed of the issue but no action has been taken yet.

Regarding Turkey's military operation targeting the PKK in the region, Hudeyda said that Turkey sees only the PKK as a threat against its national security, and does not target civilian areas.

He also called on the Iraqi army to take the necessary actions and said, "If the Iraqi army does not deal with the terrorist PKK, then Turkey should come and save us."

On Jan. 22, President Recep Tayyip Erdoğan stated that Turkey may conduct a joint counterterrorism operation with Iraq to clear PKK terrorists out of the Sinjar region.

"We may come there overnight, all of a sudden," Erdoğan added, using a famous phrase he said.

Erdoğan’s words came a week after Defense Minister Hulusi Akar visited Iraq to hold a series of meetings with top Iraqi officials and said Turkey was ready to provide assistance to the Baghdad and Irbil administrations to rid the region of the PKK's presence.

In response to the PKK oppression, Turkey continues its efforts to lend the Yazidis a helping hand.

The Turkish Red Crescent (Kızılay) on Friday distributed food parcels to 500 Yazidi families in a camp in Duhok province. The Yazidis are struggling to survive in the difficult conditions of the 16 camps located in the area of Duhok city in northern Iraq.

Yazidis living in the camp reiterated that they are unable to return to their homes because of a lack of security and PKK attacks, and thanked Turkey.