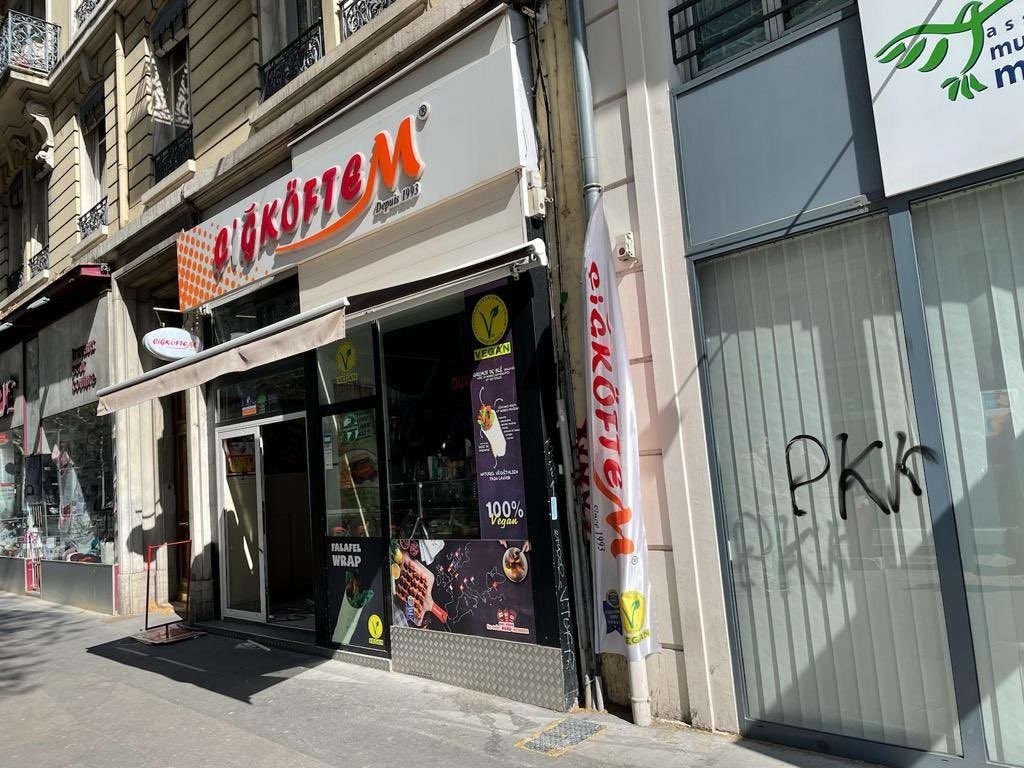 Pro-PKK graffiti on the storefront next to a Çiğköftem Turkish restaurant, in Lyon, France, April 5, 2021 (Photo taken from Twitter / @yeftale)
by DAILY SABAH Apr 08, 2021 8:39 pm
RECOMMENDED

Radical supporters of the PKK terrorist organization attacked a Turkish cultural center and other compounds in France, as the head of the Presidency for Turks Abroad and Related Communities (YTB), Abdullah Eren urged French authorities to take action.

The incident took place in the Marignane commune, where a group of 40 PKK sympathizers attacked the cultural center building with sticks and broke the windows on Thursday. They then threw torches and other objects into the building and left chanting pro-PKK slogans, Ihlas News Agency (IHA) reported.

The terrorist supporters also verbally attacked the Turkish people nearby, the report said.

“Terrorist PKK supporters attacked the Turkish Cultural Center and masjids in Marseille, France,” Eren said in a tweet, adding that it marked the fourth time in a week that PKK supporters have targeted Turkish compounds.

Eren continued by urging French authorities to take action against the violent attacks, which threaten public safety and security in the country.

Despite its status as a designated international terrorist organization with established criminal networks, the PKK has enjoyed relative freedom in European cities and has a strong presence. The group is rarely the target of police investigations.

The PKK continues to use the European Union's territory to spread propaganda, recruit new members, fundraise and for logistical support activities, according to a report by the EU's law enforcement agency released last year.

Of the countries in Europe, France is known to have the closest ties to the PKK, as the terrorist has received the support of several presidents, ranging from Francois Mitterand to the incumbent Emmanuel Macron, through different means.

Macron in particular made a clear show of his support, inviting members of the PKK's Syrian offshoot, the YPG, to Elysee Palace in April 2019.