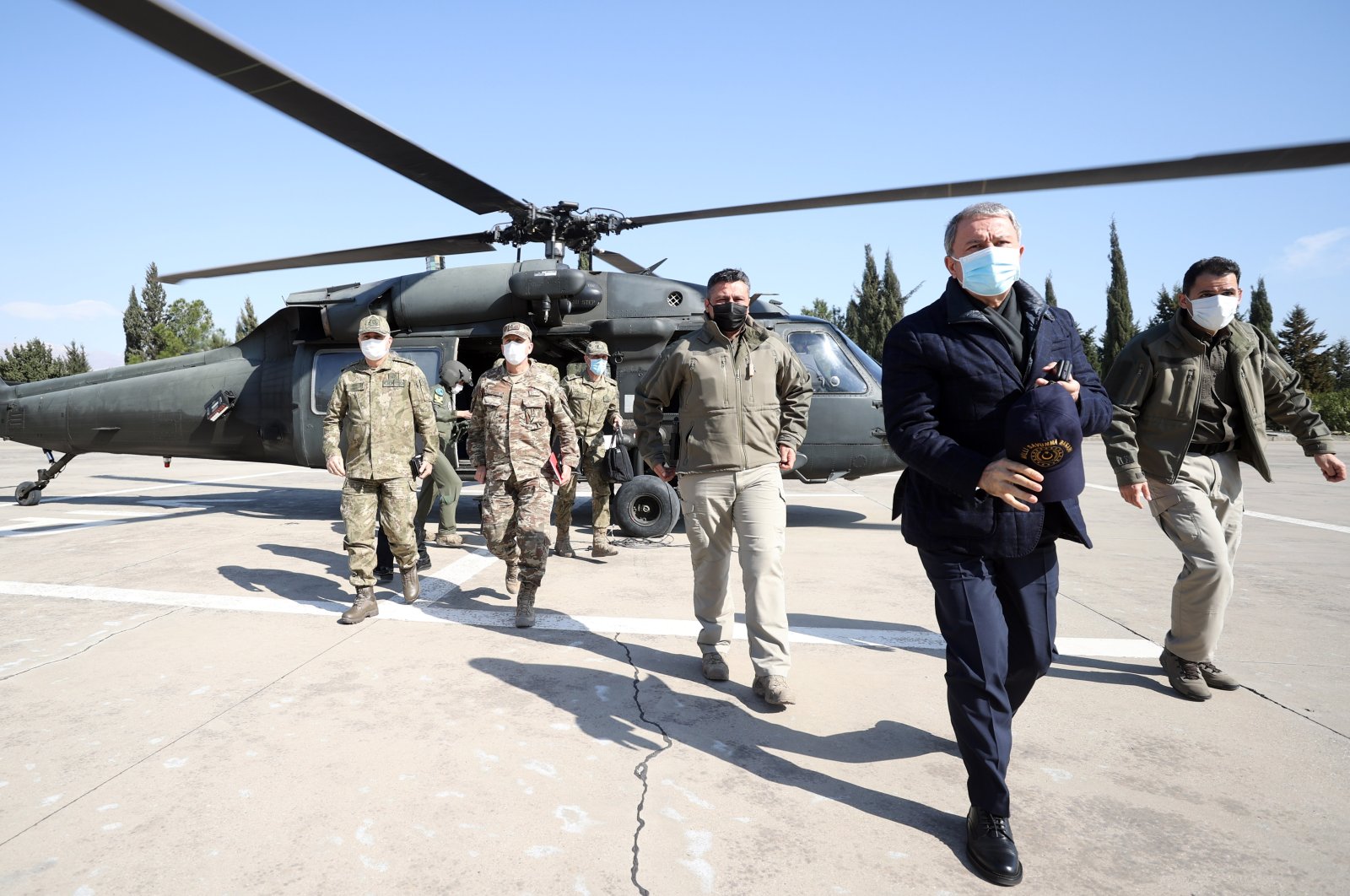 National Defense Minister Hulusi Akar and military officials get off a helicopter and walk toward the Iraqi border on Feb. 14, 2021. (AA Photo)
by Daily Sabah with AA Feb 14, 2021 9:31 am

The terrorist group has once again shown its true colors by shooting 13 civilians to death, but the Turkish military's response was even more deadly as they dealt a heavy blow to the PKK's presence in the Gara region

PKK terrorists have executed 13 Turkish citizens in a cave in northern Iraq after abducting them and shooting most of them in the head, Minister of National Defense Hulusi Akar said in a statement on Sunday.

“In preliminary investigations, it was determined that 12 of our innocent and unarmed citizens were shot in the head and martyred while another was shot in the shoulder and martyred,” he said. The grim news comes as Turkey is carrying out the Claw-Eagle 2 anti-terror operation in northern Iraq.

According to the initial information obtained from the two terrorists captured alive, our citizens were martyred at the start of the operation by the terrorist responsible for the cave,” he said, adding that all the executors in the cave were either captured or killed.

“With the operation carried out mostly using domestically developed weaponry, the terror group was dealt a heavy blow in the (Gara) region,” Akar added.

"The operation has been completed. Our land and air elements have returned to their bases and barracks safely," he said at the operations center on the border in southeastern Şırnak province.

Akar stressed the reason behind launching the operation was Turkey's right to self-defense, according to international law, to prevent the PKK terror groups' efforts to reestablish positions, which they often use to carry out cross-border attacks that target military personnel as well as civilians.

Turkey also wanted to confirm the intelligence about Turks who were abducted by terrorists, which was not disclosed for security reasons, and to take necessary measures, he said, adding that during the campaign, more than 50 terror targets, including ammunition depots, caves and bases in Gara were destroyed.

Highlighting that the operation was successfully carried out in difficult land and climatic conditions, covering a very large area, he congratulated Turkish Chief of General Staff Yaşar Güler and commanders on their efforts.

Communications Director Fahrettin Altun also congratulated the Turkish military for its successful operations in the area and offered condolences to the families of the victims and the nation.

“I offer my condolences to the Turkish people. Our martyrs have been avenged," he said, underlining the Turkish military's success in the face of PKK terrorism.

"The struggle of our security forces against terrorist organizations, starting with PKK, at home and abroad shall continue, with the strong support and prayers of the people, until the terror threat is completely eliminated," he added.

Altun expressed that Turkey will continue to fight not only the terrorist organization itself but also people and bodies that support it, serve as its fronts and legitimize and normalize terrorism.

"Terrorism seeks to make room for itself with gun-waving terrorists as well as civilian-looking phonies who support them. Our state and our nation won’t allow that and always deny opportunities to terrorist groups, which have blood on their hands, and those groups that support them," he said and added: "The groups that attempt to make PKK seem legitimate in Turkey, Syria and Iraq are collaborators of that horde of murderers. The blood of our martyrs is also on the hands of those who refrain from even condemning the terrorist organization PKK and those who omit that treacherous organization’s name in their statements in an attempt to whitewash them."

According to Altun, the PKK and its "civilian-looking supporters" are merely hired guns receiving orders from "dirty groups."

"That vile terrorist organization, which serves global centers of guardianship, has no objective except to serve the interests of those groups that enslave it," the director added, emphasizing that the PKK serves the interests of power circles that use it.

"Once again, those people who stand with organizations, which are part of the hierarchy of that terrorist group, must answer some serious questions. Will you ignore the heinous slaying of innocent and unarmed citizens, pretending nothing has happened, and keep going down that path?" he asked and continued: "We ask those traitors openly and clearly: Will you keep supporting terrorism, overtly or secretly, in an attempt to normalize them and grant them legitimacy? Of course, they will. Indeed, those are the orders that have been handed to them by their masters. Our country’s decisive struggle against all terrorist entities is vital to the region’s security and peace."

The top communications director emphasized that the state will oppose the armed and civilian elements of terrorist groups for the peace and safety of Turkish citizens.

"We will never allow those who seek to reshape our neighborhood through the proxy of terrorist organizations, those who wish to redraw borders or those centers of evil, which attempt to disturb the peace of hundreds of millions of people. We will keep telling the world, with everything at our disposal, what PKK, which changed its name to liberate it from its designation as a terrorist entity, really is, whose support it enjoys, which dirty agenda it serves and what kind of hostility it harbors against our country and nation," he said.

"We know perfectly well the advocates and spokespeople of terrorist organizations, those who control the terrorist groups they nurture from afar, and those who distinguish between terrorist entities in pursuit of false, futile and malicious goals. Turkey won’t hesitate for a second to reveal such dirty relationships nor refrain from attempting to break the back of all terrorist groups," Altun added.

He further expressed that "under the leadership of our president, the great and mighty Turkey won’t grant passage to terrorist organizations or their masters, tentacles or supporters. Once again, I pray for our martyrs and extend my deepest sympathies to our nation, the families of our martyrs and their loved ones. May Allah protect and preserve our nation and our state. The homeland won’t be divided. We will keep dealing heavy blows to terrorism and root it out."

“The PKK has once again shown that it is a network of murder, cold-bloodedly killing 13 of our citizens. This is an attack against the whole of humanity. We will fight against this murder network both for our country’s safety and for the sake of humanity,” Çelik said.

Bahçeli also blasted the PKK. “I believe this cave massacre is a turning point for bringing the PKK terrorist group and its supporters to justice,” he said.

The bodies of the victims were brought to Turkey for an autopsy later in the day. They were airlifted to the Forensic Medicine Institute in eastern Malatya for identification. Police forces took extensive security measures around the institute to safeguard the procedures.

Malatya Governor Aydın Baruş gave a speech after forensic investigation on Sunday and stated that PKK terrorists' claims that the civilians were killed by a car bombing attack is a "heinous lie."