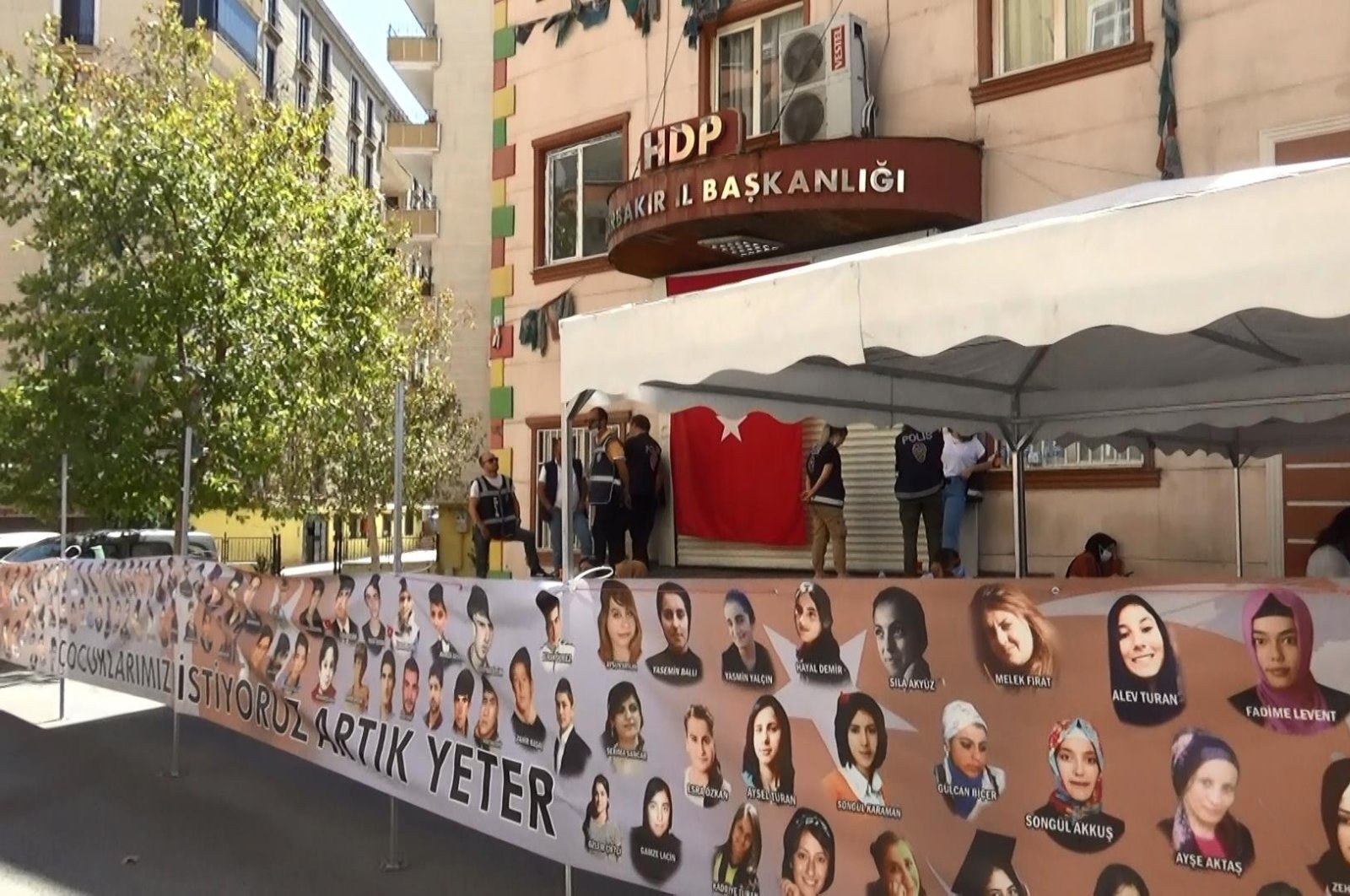 The detailed story of Kurdish mothers' struggle to reunite with their children who were abducted by the PKK terrorist group has been published in a book in three languages.

The mothers have been protesting outside the office of the opposition Peoples' Democratic Party (HDP) in southeastern Diyarbakır province for 731 days, since Sept. 3, 2019, encouraging their children to lay down their weapons and surrender to Turkish authorities.

They claim their children had been taken to the mountains by the PKK after being brainwashed by members of the party at the Diyarbakır office.

The writer of "My Mother's Voice," Tülay Demir Oktay, who dedicated herself to telling the story of the mothers' fight against the PKK terrorist group for their children's return, visited the sit-in protest area and presented her book to them.

She spent two years completing the book, which has been published in the Turkish, English and Dutch.

Oktay said she was touched by the struggle of the protesting mothers to reunite with their PKK-abducted children during her first visit to the sit-in protest area to interview them. It was also the moment she decided to tell their story to the world, she added.

She noted that seeing the struggle of the mothers, she now has a better understanding of the terrorist group's true colors.

Oktay said that although many people in Turkey know about the terrorist organization, it is not widely known abroad.

"For this reason, I wanted to write this book in a foreign language so that Europeans could learn about this subject and I wanted to show how violent terrorism is," she said.

She said the unjust suffering of the mothers and their children's abduction made her very sad.

"That's why I set out on such a path to introduce it to Europe and to help those who do not know to understand better. I hope to achieve this goal."

"In fact, this book is the work of the mothers. I have no contribution to it. This book narrates their stories," she said.

She said she was there to support the mothers while they continue to stage their sit-in protest against the terrorist group.

"As all mothers, we must deliver a message of unity against the terrorist organization together. I expect all mothers who hear our voice tomorrow to support the sit-in mothers."

Fed up with sitting at home in sorrow and unable to bear the suffering any longer, a handful of mothers, whose children were forcibly abducted and recruited by the PKK terrorist group and its Syrian branch the YPG, launched a sit-in protest in the Turkish city of Diyarbakır on Oct. 3, 2019, in a bid to reunite with their sons and daughters.

The sit-in grew day by day as more and more families, encouraged by the reuniting of some of the mothers with their children, joined the mothers holding their sit-in protest outside the HDP office, which authorities accuse of having ties with the PKK.

Coming from all corners of Turkey, a total of 234 families have so far participated in the protest. Some continue to stand with their fellow protestors despite having their children back. Thanks to efforts by the authorities and the determination of the families, 32 of their children have fled the PKK and YPG and surrendered to security authorities. In Turkey, offenders linked to terrorism are eligible for possible lighter sentences under a repentance law if they surrender.

Although some of them have been threatened by terrorist affiliates on numerous occasions and subjected to violence and property damage, the families remain undaunted, not leaving the protest site as many of them believe this is their final shot to embrace their sons and daughters with whom they have not had any contact for years and they have nothing to lose.

The protest in Diyarbakır also spread to other provinces such as Izmir, Van, Hakkari, Şırnak and Muş, with families demanding their children back. On one occasion, Maide T., a German citizen with roots in Turkey, launched a protest for her daughter Nilüfer in Berlin after she was "brainwashed" and convinced to join the terrorist group.

An overwhelming majority of the families come from an unprivileged background and are less educated. They did their best to provide for their children so they would get a university degree and have a better life. However, the families argue that PKK affiliates brainwashed their children into joining the terrorist group and shattered their dreams by abducting them while they were studying at high schools and universities.

Many of the families argue that the PKK intentionally targets students in an effort to keep the region less educated and without a future vision so they can carry out their forced recruitment campaign easily and without any objections.

The PKK knows no bounds and did not refrain from forcibly recruiting children as young as 8 and suppressing those protesting its methods. When one of the sit-in mothers, Necibe Çiftçi, stood against the PKK, which had already abducted one of her sons, her elder son was executed with his hands tied.

The disappearance of the children took a heavy toll on the families, deeply affecting their social life. Many of them say the joy in their homes also disappeared with their children and they are overcome with emotion whenever they see something that reminds them of their abducted children.

Some of the parents were forced to pause the education of the rest of their children for fear of possible abduction. They say the PKK affiliates threatened them saying they would take the remaining children as well unless they halted their protest.

In its more than 40-year terror campaign against Turkey, the PKK – listed as a terrorist organization by Turkey, the U.S. and the European Union – has been responsible for the deaths of 40,000 people, including women, infants and children.