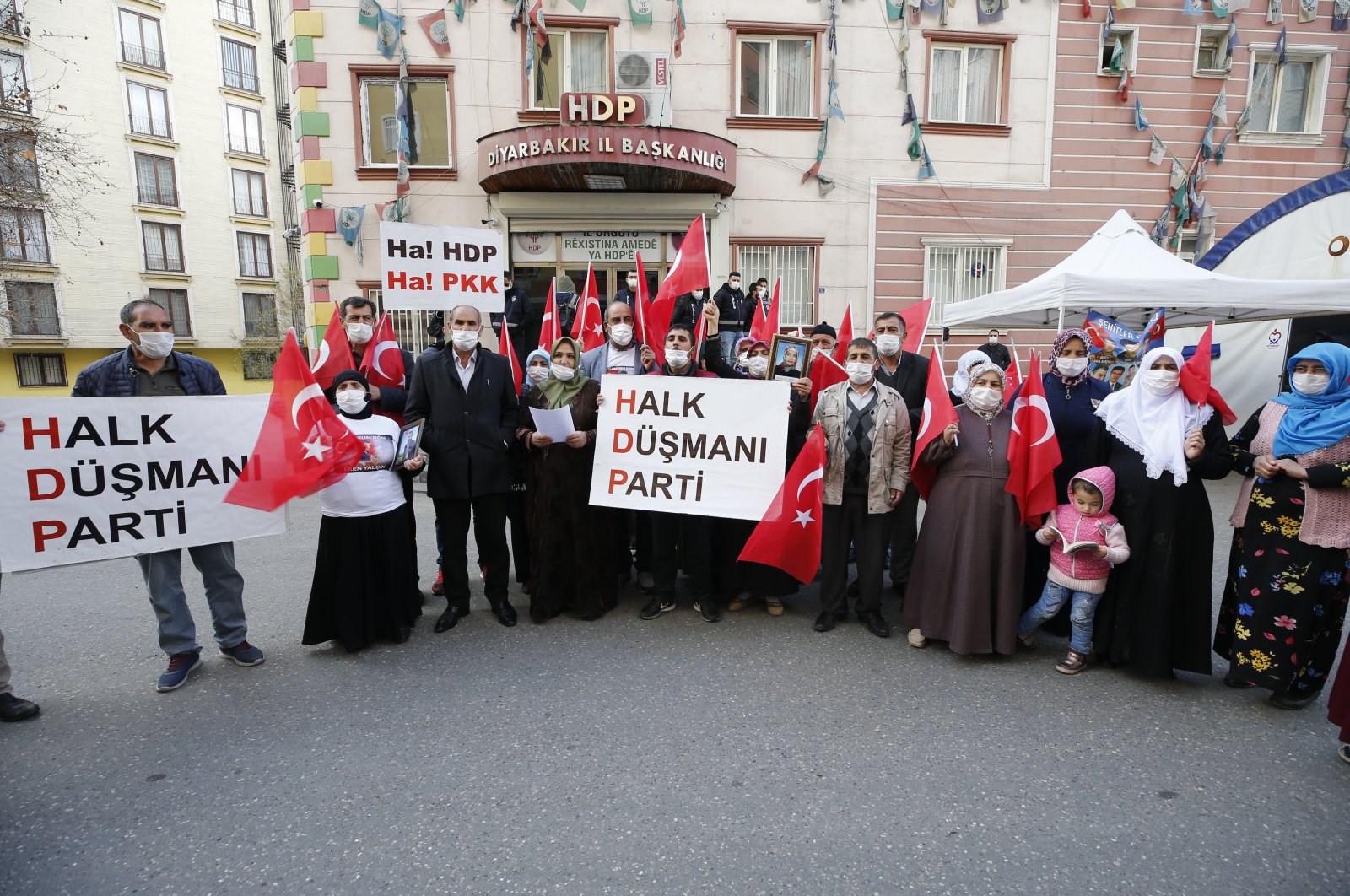 Kurdish families, whose children were abducted by the PKK, protest the terrorist group and the pro-PKK Peoples' Democratic Party (HDP) in front of the party's office in southeastern Diyarbakır province, Turkey, March 18, 2021. (AA Photo)
by DAILY SABAH Mar 18, 2021 11:44 am

The close ties between the HDP and PKK terrorist group were highlighted in the indictment presented by the chief public prosecutor of Turkey's Supreme Court of Appeals, underlining that political parties should achieve their goals peacefully within the universal and democratic rules of the law

There is no difference between the Peoples' Democratic Party (HDP) and the PKK terrorist group, the chief public prosecutor of Turkey's Supreme Court of Appeals said in an indictment, as he filed Wednesday a lawsuit for the closure of the pro-PKK party.

Bekir Şahin, the chief public prosecutor of the Supreme Court of Appeals, in the indictment accuses HDP leaders and members of acting in a way that flouts the democratic and universal rules of law, colluding with the PKK and affiliated groups, and aiming to destroy and eliminate the indivisible integrity of the state with its country and nation.

The indictment accused the HDP of becoming the focal point of actions in violation of the state's "unbreakable unity," and that the HDP had an "active role in providing personnel" to the PKK.

Among the past statements of party leaders proving the close ties to the terrorist group, HDP co-Chair Pervin Buldan had confessed to previous contact and communication between the party and the terrorist group, praised jailed PKK leader Abdullah Öcalan and his role in the foundation of the party by rejecting the fact that the PKK is a terrorist group. Figen Yüksekdağ, a former co-chair of the party, during a speech in 2015 said that they lean on the PKK's Syrian branch, the YPG, and other related groups. One of the party's former co-chairs, Selahattin Demirtaş, in another speech in 2012 also said that they would build a statue of Öcalan, whose posters were many times found in local HDP offices. The images of Öcalan and pro-PKK slogans during the party meetings constitute other proof of the close ties in the indictment.

Moreover, the HDP has many times drawn ire for transferring taxpayer money and funds to the PKK. HDP mayors and local officials have been found to misuse funds in support of the PKK terrorist group and provide jobs to PKK sympathizers. Its mayors have been accused of undermining municipal services, allowing the PKK to dig ditches in the streets and launch attacks on police and soldiers when the terrorist group adopted an urban warfare strategy in July 2015 and ended a two-year reconciliation period. HDP municipalities and their staff were also found to be actively participating in terrorist attacks launched after July 2015.

The party's role in the riots of Oct. 6-7, 2014, was also included in the indictment. In October 2014, amid a Daesh siege on the YPG, on Ain al-Arab – or Kobani – Demirtaş and other HDP officials called for riots. In the events that would become known as the Oct. 6-7 Kobani protests, 31 people were killed and some 350 others were injured in clashes between pro-PKK and conservative Kurdish groups and security forces throughout Turkey, especially in the southeast. During the violence, 16-year-old Yasin Börü was brutally murdered by the terrorist group's supporters in southeastern Diyarbakır when he was distributing meat for poor families. Following the events, more than 1,600 investigations were launched, 894 suspects were detained and 386 of them were imprisoned. Eighteen of the 41 suspects were sentenced to life in prison for the murder of Yasin Börü and his friends.

In the statement, Şahin said that political parties are indispensable elements of democratic political life and institutions that aim to contribute to the economic and social development of society.

The prosecutor stressed that it is essential for political parties to achieve these goals peacefully within universal and democratic rules of law and they should carry out their activities according to the Constitution and the law.

No fundamental rights and freedoms can be used in the form of "activities aimed at destroying and abolishing the indivisible unity of the state with its country and nation," he underlined.

If it is determined by the Constitutional Court that such acts were committed and became the focus of any political party, it would be permanently dissolved due to it violating Article 68 of the Constitution, he added.

Şahin further said a party's failure to condemn terrorism is accepted as sufficient justification for closure by the European Court of Human Rights.

In a similar case, Batasuna, a Basque separatist political party in Spain, was banned in 2003 after a court ruling declared that the party was financing the ETA separatist group with public money.

The party is included in the European Union's list of terrorist organizations and their members as a component of ETA. The Spanish ruling was appealed before and, later on, confirmed by the European Court of Human Rights.

Batasuna was a part of the Basque National Liberation Movement, which includes social organizations, trade unions, youth and women's groups. Other groups closely related to Batasuna were also declared illegal by different court rulings on the same charges of having collaborated with or being part of the ETA.

A permanently dissolved party cannot be founded under another name in Turkey.

If the Constitutional Court determines that the party members, including the founders facing political bans, cause the party to be permanently dissolved with their statements and actions, these persons cannot be founders, members, directors and supervisors of another party for five years.

Call for respect to judiciary

Following the judicial move, Turkey stated on Thursday that international criticism of the prosecutor's case to shut down the HDP amounted to intervening in the Turkish judiciary and called for respect for an ongoing independent judicial process.

"Everyone must wait for the ruling the Constitutional Court will make in this process. Commenting on an ongoing judicial process amounts to intervention in the judiciary," Turkey's Foreign Ministry said in a statement.

The statement came in response to the reactions from the international community, as the U.S. said late Wednesday that it is "closely following events" in Turkey.

"We are monitoring the initiation of efforts to dissolve the Peoples' Democratic Party, a decision that would unduly subvert the will of Turkish voters, further undermine democracy in Turkey and deny millions of Turkish citizens their chosen representation," U.S. State Department spokesperson Ned Price said in a statement.

Price said the U.S. is calling on the Turkish government "to respect freedom of expression in line with protections in the Turkish Constitution and with Turkey's international obligations."

In another statement late Wednesday, the country's communications director said that the HDP without question has organic ties to the PKK terrorist group.

"It is an indisputable fact that the HDP has organic ties to the PKK, which Turkey, the United States and the European Union consider a terrorist entity," Fahrettin Altun said on Twitter.

Altun said the HDP's senior leaders and spokespeople, through their words and deeds, have repeatedly and consistently proven that they are the PKK's political wing.

"Whether that relationship warrants the HDP's closure or its subjecting to another punitive measure is a question that the Constitutional Court alone can answer," he said.

He also urged all parties to respect Turkey's independent judiciary and count on its legal system to deliver justice.

Nationalist Movement Party (MHP) leader Devlet Bahçeli on Thursday welcomed the case by the top prosecutor demanding the closure of the HDP, saying the party should be shut, "never to be opened again."

Bahçeli, whose party led calls for the HDP's closure in recent weeks, said it was a "criminal organization disguised in a political cloak."

On the other hand, main opposition Republican People's Party (CHP) leader Kemal Kılıçdaroğlu said that political parties are the vital elements of democracy and added that Turkey should give up a process of closing political parties.

The move follows growing calls by some Turkish political leaders for the HDP to be officially closed down. In recent years, more and more HDP executives and elected officials have been charged with terrorism-related offenses. Turkish officials have long argued that the HDP is little more than a front group for the PKK.