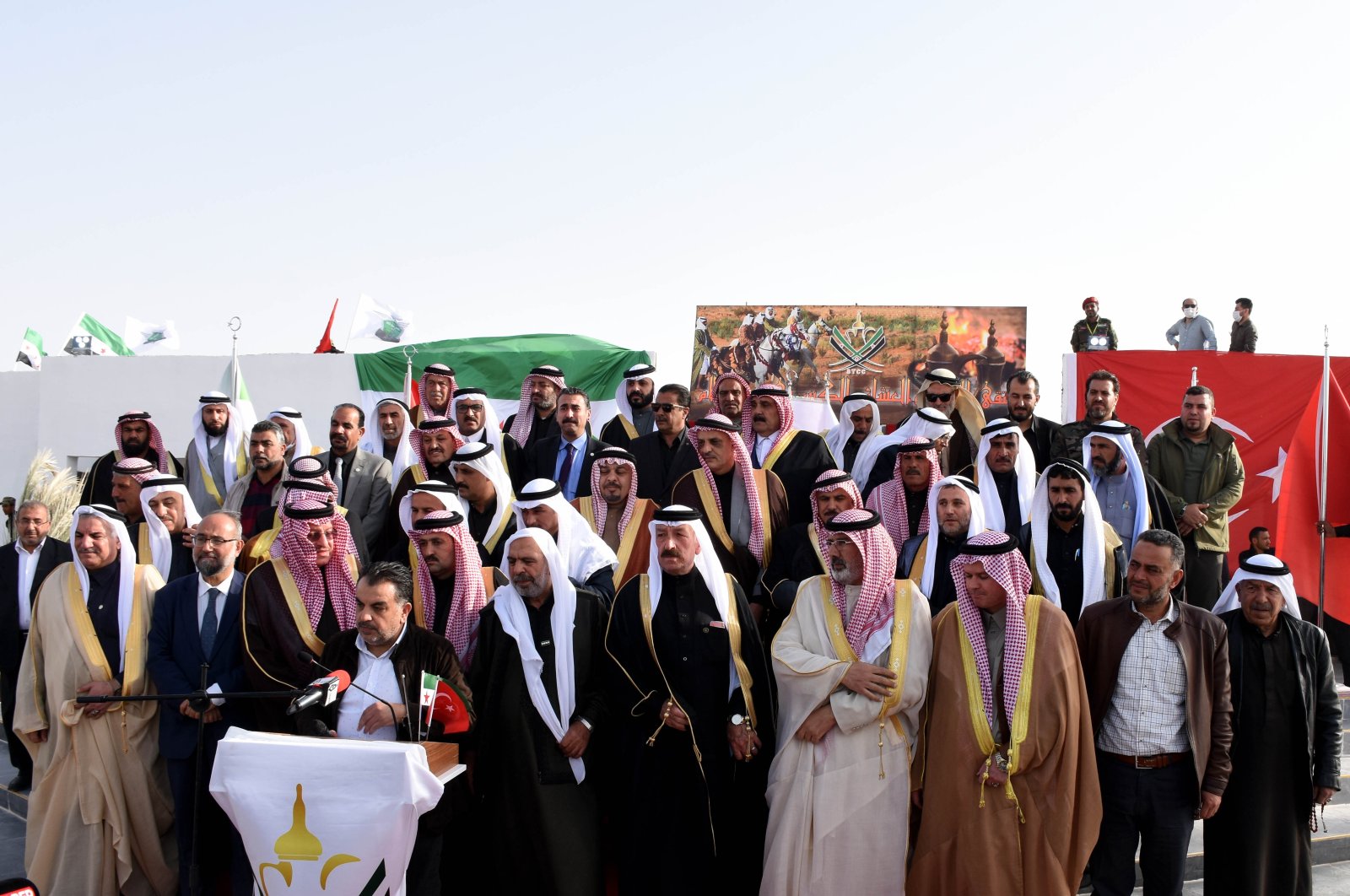 Several Syrian tribes have pledged to act in unison against the YPG/PKK terrorists, the Assad regime and Iran’s forced sectarian policies, in a meeting held in the northern Ras al-Ain town, Anadolu Agency (AA) reported Wednesday.

Around 150 tribes, including Agedat, Tai, Mawali, Sharabin and Harb said they have joined the Grand Peace Spring Operation meeting, attended by over 1,000 people in the Oudwaniyya village in Ras al-Ain.

The High Council for Syrian Tribes and Clans and Abdurrahman Mustafa, head of the Syrian Interim Government, as well as local councilors in Tal Abyad and commanders from the Syrian National Army (SNA) attended the meeting.

Arab, Christian, Assyrian, Turkmen and Kurdish tribes and clans reiterated their determination to oppose the Assad regime, sectarian terrorist groups and others in the area, the report said.

Mustafa noted that the terrorist YPG/PKK and Iran-backed terrorist groups are carrying out policies similar to those previously implemented by Daesh terrorists in the region.

“The YPG/PKK is forcing its own curriculum in an Arab community, while Iran aims to impose Shiite ideology in the region. We reject and condemn all of these policies, which aim to destroy the societal fabric and demography,” Mustafa said.

Ziyad Musa Malki, the Christian representative of the council, noted that they convey the message that the Syrian people are united.

He noted that the Assad regime has pictured itself as the protector of minorities to win international sympathy, but the truth is otherwise.

“Assad has bombed minorities and has forcefully displaced them,” Melki said.

Meanwhile, the Kurdish representative Ibrahim Basha Malla noted that the Kurds have given the message that they are a part of the “Syrian revolution” by participating in the meeting.

Noting that the YPG/PKK has dealt a heavy blow to the social fabric of Syria, Malla said the terrorists try to impose their ideology using weapons, arbitrarily detention of individuals, abduction of child soldiers and they carry out terrorist attacks.

Syrian tribes have been opposing the Assad regime and the YPG/PKK terrorists in Syria.

In addition, local tribes have begun to fight back against the YPG/PKK’s oppressive policies, including arbitrary arrests and kidnappings by the terrorist organization in recent years.

The YPG/PKK started to assassinate tribe leaders to yoke local groups. It has targeted the Agedat tribe specifically, which has over 1 million members. The tribe responded by launching an offensive on YPG/PKK-held areas and liberated some villages after three days of fighting.

For years, the Assad regime has ignored the needs and safety of the Syrian people, only eyeing further gains of territory and crushing the opposition. With this aim, the regime has for years bombed civilian facilities such as schools, hospitals and residential areas, causing the displacement of almost half of the country’s population.

The Syrian regime military and its ally Russia carried out attacks targeting civilians between April 2019 and March 2020, killing at least 224 civilians, according to the Human Rights Watch (HRW).