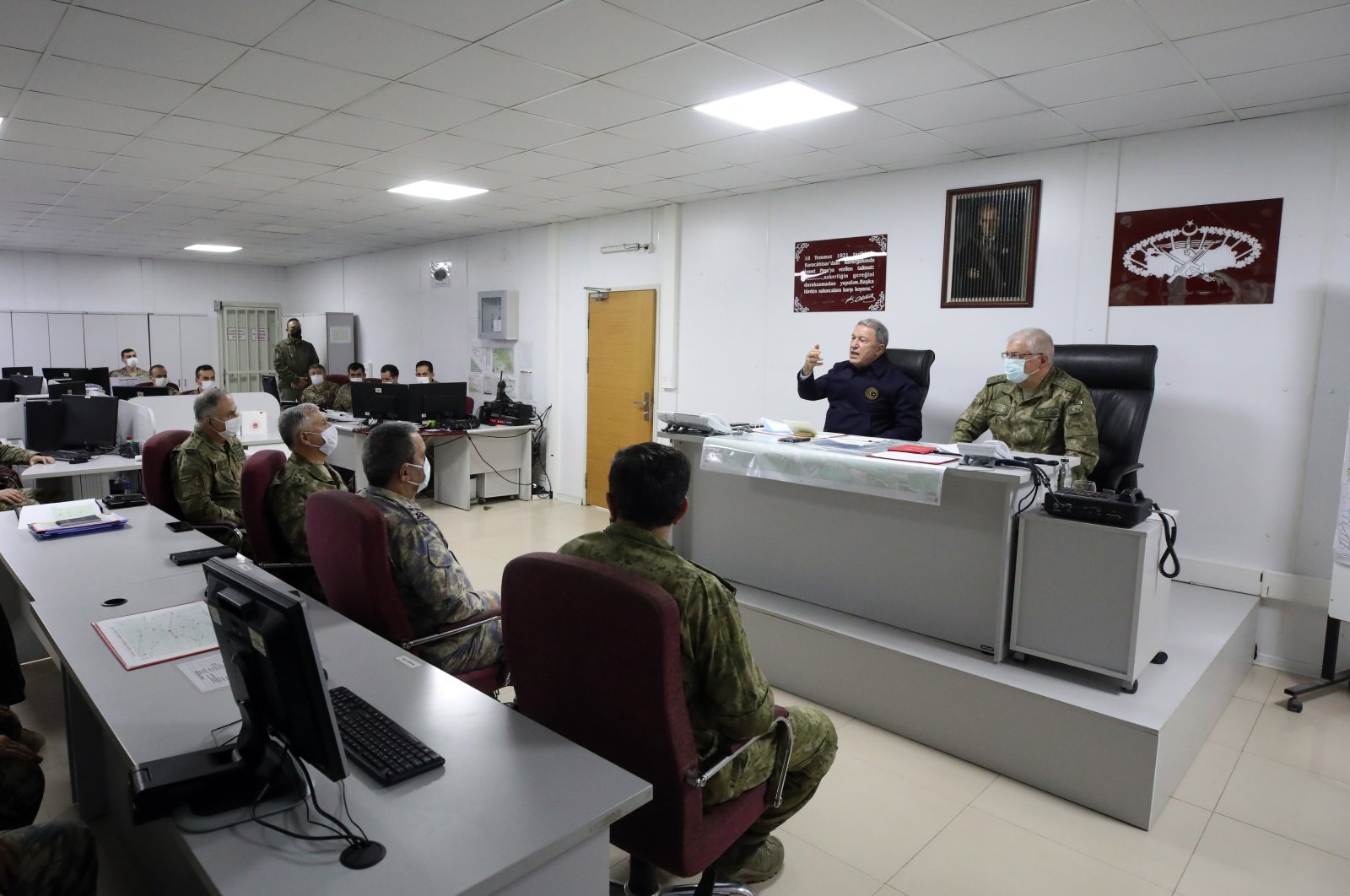 National Defense Minister Hulusi Akar speaks while the top brass and other military officials listen during a meeting at the operation center near the border with Iraq, Feb. 14, 2021. (AA Photo)
by Anadolu Agency Feb 14, 2021 10:43 am
RECOMMENDED

Defense Minister Hulusi Akar said two terrorists were captured and the region was mostly cleared of the terrorist group during the "extremely special and critical" operation in the Gara region.

"The operation has been completed. Our land and air elements returned to their bases and barracks safely," he said at the operations center on the border in southeastern Şırnak province.

Akar stressed the reason behind launching the operation was Turkey's right to self-defense, according to international law, to prevent the PKK/KCK terrorist groups' efforts to reestablish positions.

He said Turkey also wanted to confirm the intelligence about Turks who were abducted by terrorists, which was not disclosed for security reasons, and to take necessary measures.

During the campaign, more than 50 terrorist targets, including ammunition depots, caves and bases in Gara, were destroyed, he said.

"While our activities in the Operation Claw-Eagle 2 area were continuing, the remains of 13 citizens who were detained in a cave, which was taken under control following the intense clash, were found," said Akar. "All of the terrorists in the cave that martyred our citizens were neutralized."

He said following an evaluation, it was determined that the innocent and unarmed Turks were martyred by being shot - one in the shoulder and rest in their heads.

Akar said three soldiers were martyred and three others were injured in the land operation.

Highlighting that the operation was successfully carried out in difficult land and climatic conditions, covering a very large area, he congratulated Turkish Chief of General Staff Yaşar Güler and commanders.

Turkey launched Operation Claw-Eagle 2 on Wednesday in line with its right to self-defense according to international law to prevent the PKK/KCK and other terrorist groups' efforts to reestablish positions used to carry out terrorist attacks against Turkey.

Turkish authorities use "neutralized" to imply that the terrorists in question were killed, captured or surrendered.

Turkey's operations Claw-Tiger and Claw-Eagle were launched last June to ensure the safety of Turks and borders by eliminating the threat of the PKK and other terrorist groups that often use northern Iraq to plan cross-border attacks.

In its more than 40-year terror campaign against Turkey, the PKK – listed as a terrorist organization by Turkey, the US. and the EU – has been responsible for the deaths of 40,000 people, including women, children and infants.