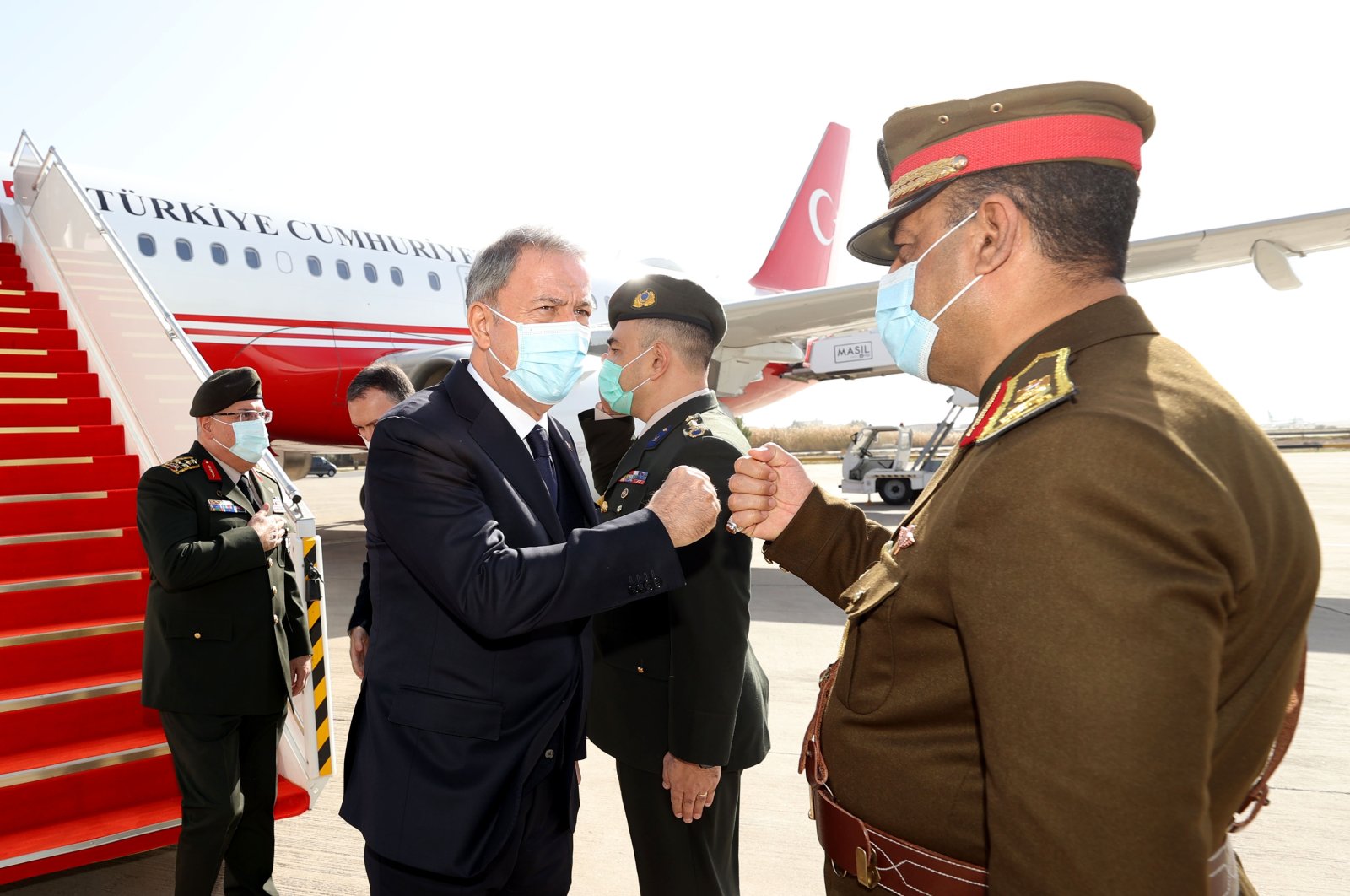 Reiterating Turkey’s legitimate security concerns during an official visit to Baghdad, Defense Minister Akar called on Iraqi authorities for the joint cooperation and coordination against the PKK terror group’s presence in northern Iraq

Turkey is ready for full cooperation and coordination with Iraq in its fight against the PKK terrorist group, Defense Minister Hulusi Akar said Monday.

Turkey's top defense official Akar, along with the country's Chief of Staff Gen. Yaşar Güler, arrived in the Iraqi capital Baghdad Monday as part of an official visit to discuss joint cooperation between Turkey and Iraq, with a specific focus on combatting terrorism.

Speaking after a meeting with his Iraqi counterpart Jouma Anad, Akar said there are close ties beyond brotherhood between the two countries.

He added that the region has been going through a sensitive period. "We can overcome the challenges in our region together ... We can make our region a center of peace and security. We respect Iraq's territorial integrity, sovereignty, well-being and welfare. Iraq's political unity is a must for us. As we have always said, our only aim is to protect our people and our borders, live in peace and welfare within the limits of those borders while defending our rights and interests," Akar said.

He underlined that the terrorist group's presence in northern Iraq is a common threat for both countries' security. "Cooperation and coordination against the PKK terrorist group play a very important role. We are ready for every possible coordination with Iraq."

Last month, al-Kadhimi visited Turkey and met with President Recep Tayyip Erdoğan. Turkey appreciates the operations conducted by Iraqi authorities against the PKK terrorist group, Erdoğan had said at a joint news conference with al-Kadhimi in the capital Ankara.

Underlining that Turkey and Iraq have agreed to continue fighting against their "common enemies," namely the PKK, Daesh and the Gülenist Terror Group (FETÖ), Erdoğan had said that separatist terrorism has no place in the future of Turkey, Iraq or Syria.

Al-Kadhimi, for his part, had said that Iraq cannot tolerate any formation that threatens Turkey's security, referring to the joint fight against the common enemies Erdoğan listed.

He also said that in cooperation with Turkey, Iraq can rebuild from the devastation Daesh left in the country.

In 2017, Iraq declared victory over Daesh by reclaiming all its territory, about a third of the country's area, invaded in 2014. But the terror outfit still maintains sleeper cells and launches attacks periodically. The Iraqi army continues to carry out anti-terror operations.

The PKK also managed to establish a foothold in northern Iraq's Sinjar in mid-2014 under the pretext of protecting the local Yazidi community from the Daesh terrorist group. Since then, the PKK has reportedly established a new base in Sinjar for its logistical and command-and-control activities. Around 450,000 Yazidis escaped Sinjar after Daesh took control of the region in mid-2014.

The Turkish Armed Forces (TSK) regularly conducts cross-border operations in northern Iraq, a region where PKK terrorists have hideouts and bases from which to carry out attacks in Turkey. The Kurdish Regional Government (KRG) in northern Iraq had previously called the PKK's presence in Sinjar unacceptable and urged the militants to leave the area.

In its more than 40-year terror campaign against Turkey, the PKK, listed as a terrorist organization by Turkey, the U.S., and the European Union, has been responsible for the deaths of 40,000 people, including women, children and infants.