Turkey remembers martyrs of democracy on anniversary of failed coup 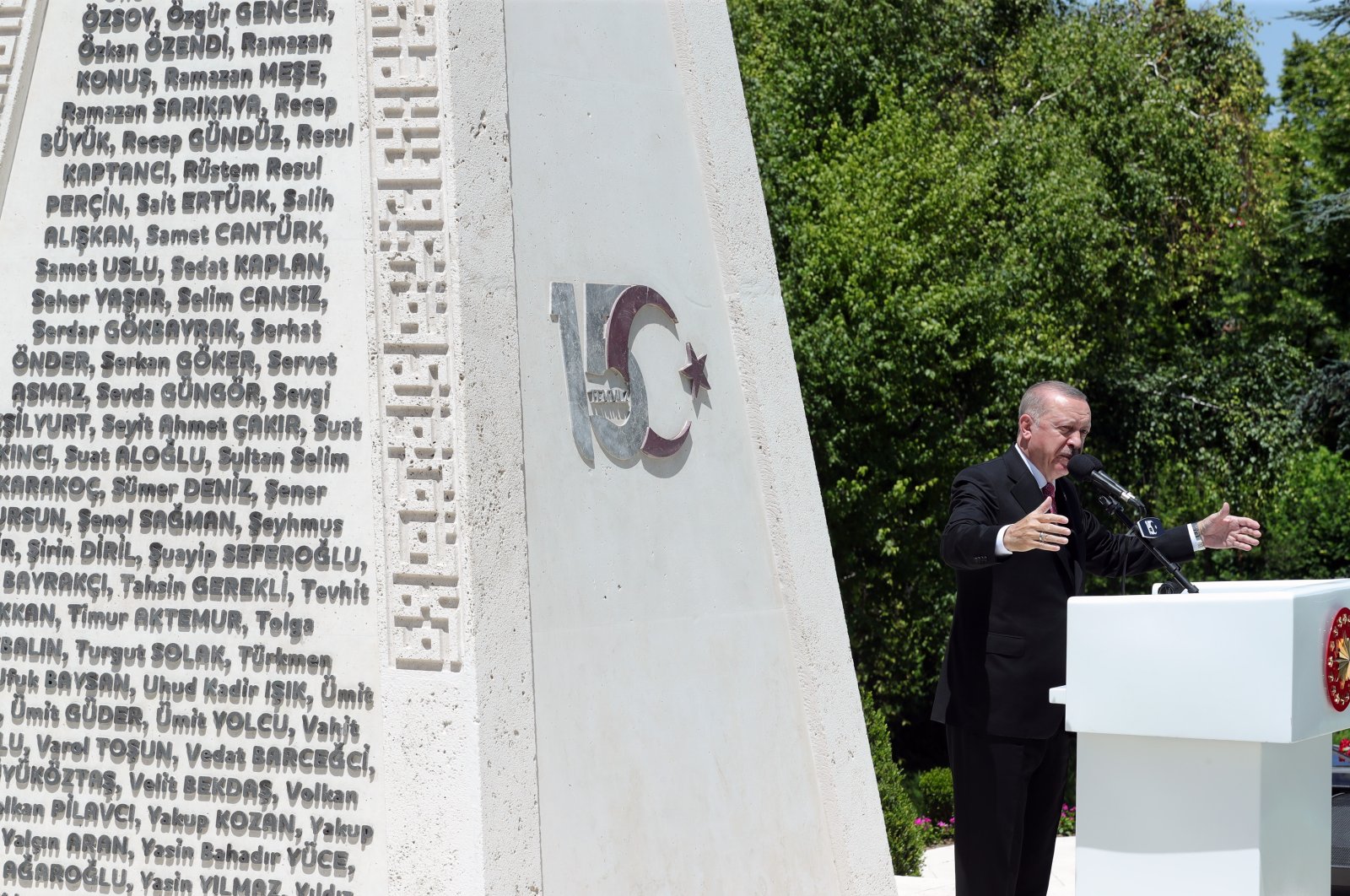 Turkey commemorates on Thursday the fifth anniversary of the thwarted coup attempt by the Gülenist Terror Group (FETÖ), which left 251 people dead and nearly 2,200 injured, with events planned across the country, including in Istanbul and the capital, Ankara.

Addressing guests and the families of the victims, President Recep Tayyip Erdoğan during a commemoration ceremony in Parliament, remembered those that lost their lives on the night of July 15.

"July 15 is the victory of the people, the national will and those setting their hearts on democracy," Erdoğan highlighted, "the destiny of July 15 is the common pride of all of us."

July 15 is the day independence won over belittlement, the day justice won over persecution, he added.

“Just one and a half months after the coup attempt, our armed forces have carried out the Operation Euphrates Shield,” Çavuşoğlu pointed out.

“We continue and will continue to fight FETÖ in every corner of the world,” he added, noting that the activities of FETÖ-linked schools in 42 countries were terminated.

He also warned the international community about the threat FETÖ poses, saying: “this insidious terrorist organization is today attacking us and may tomorrow attack you.”

The president is also expected to attend the opening of the July 15 Museum in the capital, which has been established to tell the story of the night of the coup with the help of sound and visual effects.

During the night, a "democracy vigil" will be held in Parliament before commemorations culminate with a wreath-laying ceremony that will take place at the time the building was attacked.

The stories of those "martyred in the July 15 coup attempt" in 2016 were shared with the world in English through live broadcasts from monuments in Ankara and metropolis Istanbul by Turkey's Communications Directorate.

"As part of the commemoration programme marking the fifth anniversary of July 15, 251 martyrs will be commemorated one by one, and their heroism will be broadcast with a visual presentation in English," the directorate said in a statement.

"The goal of the programme is to call international attention to the nation's democratic victory, which was earned at the expense of its life, in the fight against the July 15 coup attempt," the statement added.

World leaders from countries including Qatar, Pakistan and Azerbaijan also sent messages of solidarity to Turkey on Thursday.

The emir of Qatar, Sheikh Tamim bin Hamad Al Thani, congratulated Edoğan on the occasion of the "Day of Democracy and National Unity."

"The Emir of Qatar sent a cable of congratulations to President of the Republic of Turkey, Erdogan, on the occasion of the National Day of Democracy and National Unity," the state news agency QNA said.

"On behalf of the government and people of Pakistan, and on my own behalf, I would like to reaffirm our solidarity with the brotherly people and government of Turkey on the occasion of ‘Democracy and National Unity Day,'" Pakistan's Prime Minister Imran Khan. Azerbaijan’s President Ilham Aliyev underlined that Turkey emerged stronger from the coup attempt.

The Gülenist Terror Group (FETÖ) and its U.S.-based head Fetullah Gülen orchestrated the failed coup of July 15, 2016, in Turkey.

Turkish people bearing Turkish flags stepped out in tens of thousands to resist the coup attempt, facing off against the terrorists and climbing on top of tanks.

FETÖ was also behind a long-running campaign to overthrow the state through the infiltration of Turkish institutions, particularly the military, police and the judiciary. The Turkish government remains more determined than ever to suppress the putschists' coup aspirations, opposing any rhetoric implying otherwise.

Erdoğan on Wednesday underlined that Turkey will continue to pursue FETÖ members "inside and outside Turkey ... until the last member is neutralized," in an address in Parliament.

According to Interior Ministry figures, 135,916 operations targeting FETÖ have taken place since July 15, resulting in 312,121 arrests.

Ankara formally requested Gülen's extradition on July 19, 2016, and has been pressing the U.S. ever since, sending hundreds of folders full of evidence implicating Gülen and FETÖ in the coup attempt. The issue has been raised in bilateral meetings between Turkish and American officials in phone calls, letters and other exchanges.

Messages of support for Turkey's democracy poured in from top international officials, who made phone calls and released statements.

Bosnia-Herzegovina was the first country to issue a message of support for Turkey.

The first official international visitor to come to Turkey in the coup's wake was Georgia's then-Prime Minister Giorgi Kvirikashvili, who arrived in the country on July 19, just four days later.

Nursultan Nazarbayev, who was the president of Kazakhstan at the time, was the first head of state to visit Turkey after the defeated coup.

High-level representatives from Middle East countries, including Bahrain, Palestine, Qatar, Iraq and Iran also later visited Turkey, as did officials from countries in the Americas, Europe and Asia.

Joe Biden, who was the U.S. vice president at the time, visited Turkey on Aug. 24, over a month after the coup bid.

He called Erdoğan a day after the unsuccessful bid to overthrow the Turkish government and conveyed his support for Turkey and its people.

Erdoğan spoke to Barack Obama, his American counterpart at the time, on July 19.

In the phone call, Obama condemned the coup attempt and voiced support for democracy in Turkey.