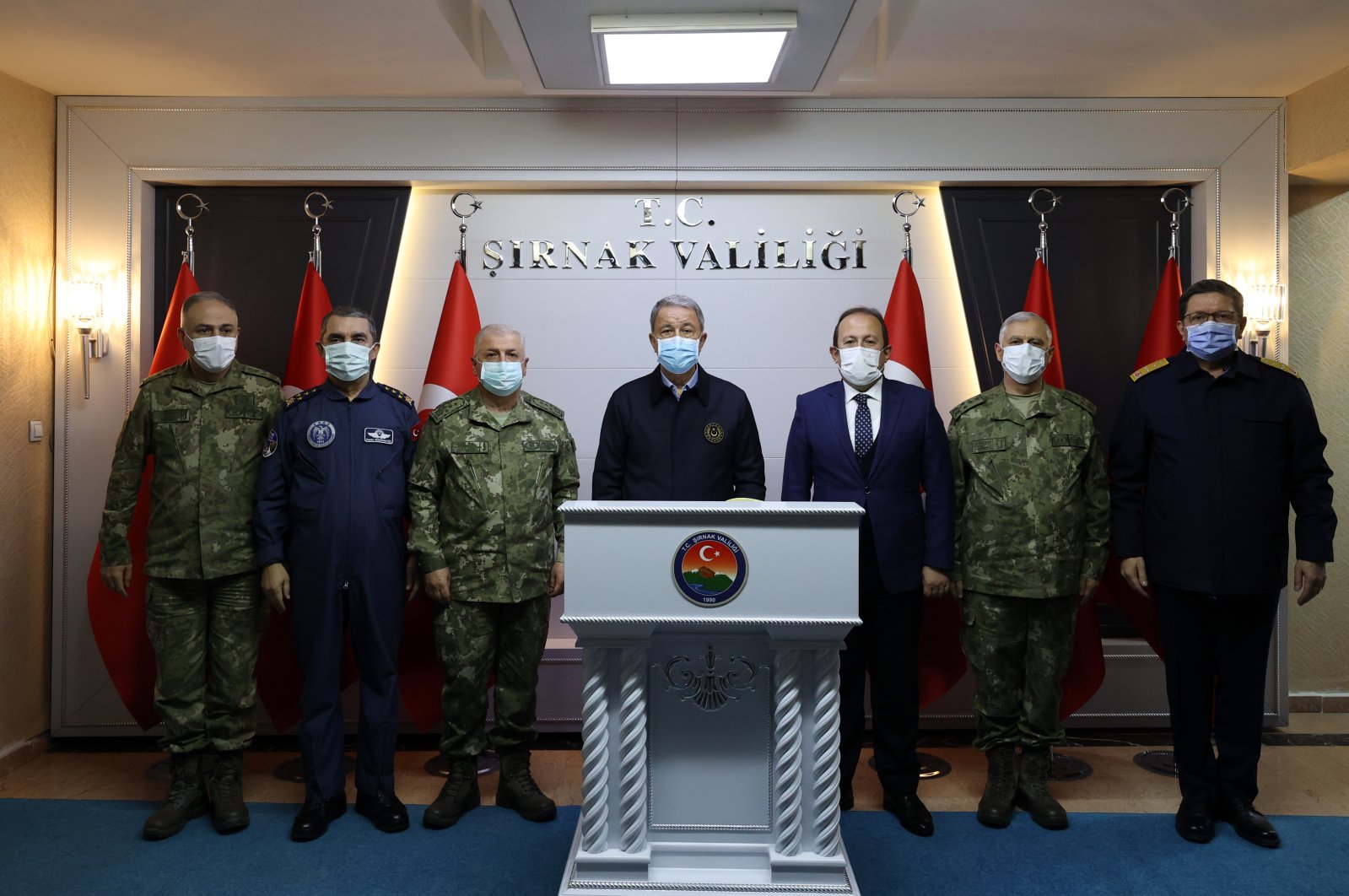 Turkey's Defense Minister Hulusi Akar on Saturday said the country will continue its intensified anti-terrorism operations until the last terrorist is eliminated.

"Until when? Until the last terrorist is neutralized. Thus, we will save our noble nation from the terror scourge that has been going on for many years and we will ensure security," Akar said.

He addressed the Turkish commanders at the border and beyond via video link during his visit to the southeastern province Şırnak bordering Iraq. He was also accompanied by top Turkish generals.

"It will contribute not only to our security, but also to the security of Iraq, our friendly and brotherly country, so it will enable the peace and security to arrive at the region quickly," Akar added.

"We are waiting for what needs to be done to neutralize them as soon as possible," he said, referring to the terrorists in Sinjar and Makhmur, northern Iraq.

Akar said Turkey is coordinating with Iraq on this issue and it already expressed readiness for cooperation.

"We believe that our Iraqi neighbors will do whatever necessary in this regard and we are closely following the issue," he added.

The Sinjar deal, inked under the auspices of the United Nations last October, between the central government in Baghdad and the Kurdistan Regional Government (KRG) on the status of the region, seeks to clear the region of PKK terrorists.

Following the deal, the Turkish Foreign Ministry said in a statement that it hoped that the agreement would be carried out in a way that enables the reinstatement of Iraqi authorities' control in Sinjar, the eradication of the Daesh and PKK terrorist groups and their extensions in the region and ensure the safe return of Yazidis and the other people from the region who have been subjected to grave oppression and persecution, first at the hands of Daesh and then by the PKK.

Sinjar is wedged between Turkey to the north and Syria to the west, making it a highly strategic zone, long-coveted by both the central government in Baghdad and the KRG in the north.

The PKK terrorist group managed to establish a foothold in Sinjar in mid-2014 under the pretext of protecting the local Yazidi community from Daesh. Since then, the PKK has reportedly established a new base in Sinjar for its logistical and command-and-control activities. Around 450,000 Yazidis escaped Sinjar after Daesh took control of the region prior to that period.

On relations with Greece, Akar said, "We continue to carry out our extremely reasonable and logical policies without any problems and at full speed."

"Despite our constructive, positive, peaceful and negotiable attitude, unfortunately, the provocative actions of our Greek neighbors continue," he said, blaming Greece for escalating tensions in the region.

Tensions have been running high for months in the Eastern Mediterranean as Greece has disputed Turkey's rights to energy exploration.

Turkey – the country with the longest coastline on the Mediterranean – sent out drill ships to explore for energy on its continental shelf, asserting its rights in the region as well as those of the Turkish Republic of Northern Cyprus (TRNC).

Greece has made maximalist maritime territorial boundary claims based on small islands just kilometers off the Turkish coast. To reduce tensions, Ankara has called for dialogue and negotiations to ensure fair sharing of the region's resources.