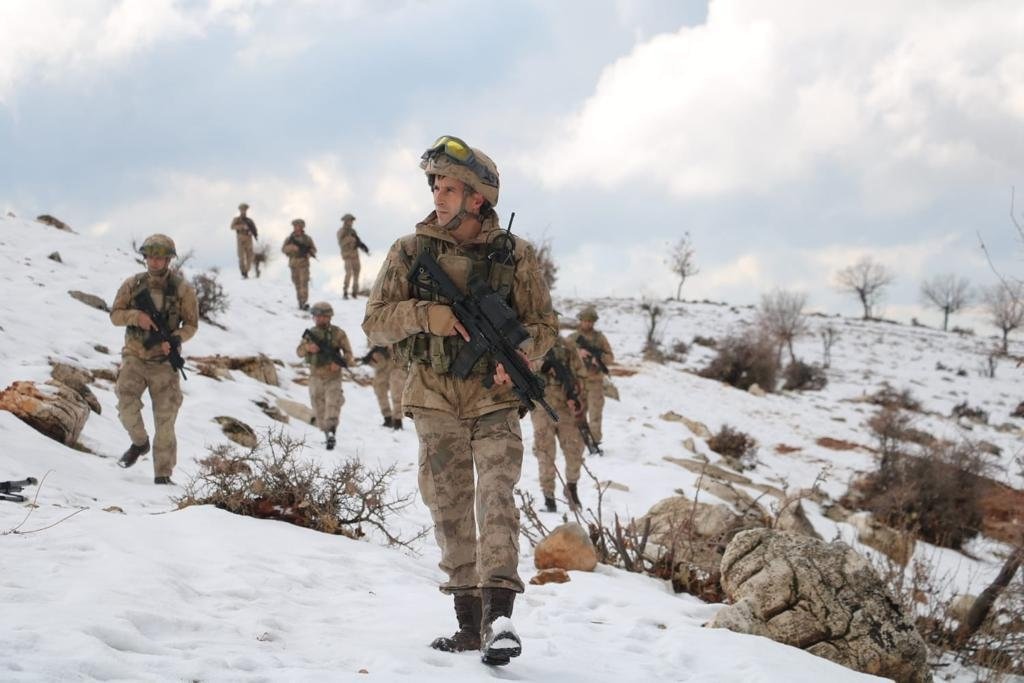 A soldier during a counterterrorism operation in a rural region between the southeastern Bitlis and Siirt provinces, Feb.3, 2021. (Sabah File Photo)
by Daily Sabah with AA Feb 03, 2021 1:45 pm
RECOMMENDED

Turkish security forces eliminated 164 members of the PKK and its Syrian offshoot, the YPG, in December both in Turkey and abroad through cross-border operations.

The operations were a coordinated effort between the Turkish Armed Forces (TSK), the General Directorate of Security, the Gendarmerie General Command and the National Intelligence Agency (MIT).

According to data compiled by Anadolu Agency (AA), 112 suspects were detained across many provinces in the anti-terror operations against the PKK and its affiliated organization in December. 61 of the suspects were arrested, including former Diyarbakır deputy of the pro-PKK Peoples' Democratic Party (HDP) Leyla Güven and Deputy Mayor of Istanbul’s Şişli province Cihan Yavuz. Three security guards were killed and six others were wounded in the clashes.

Certain high-ranking PKK members were also arrested. A PKK terrorist wanted on Red Notice by Interpol, whose initials are M.Ş.K, was caught on Dec. 2 in the Ceylanpınar district of Şanlıurfa.

A large number of weapons, explosives and ammunition belong to terrorists were found and seized in the operations. Many caves and shelters used by terrorists were destroyed by gendarmerie and security forces.

The number of terrorists that were persuaded to surrender also increased last year, reaching 243.

According to security sources, severe losses during security operations caused despair among the terrorists' ranks.

Since 2016, Turkey has launched a trio of successful anti-terror operations, in northern Syria to prevent the formation of a terror corridor and to enable the peaceful settlement of residents: Euphrates Shield in 2016, Olive Branch in 2018, and Peace Spring in 2019.