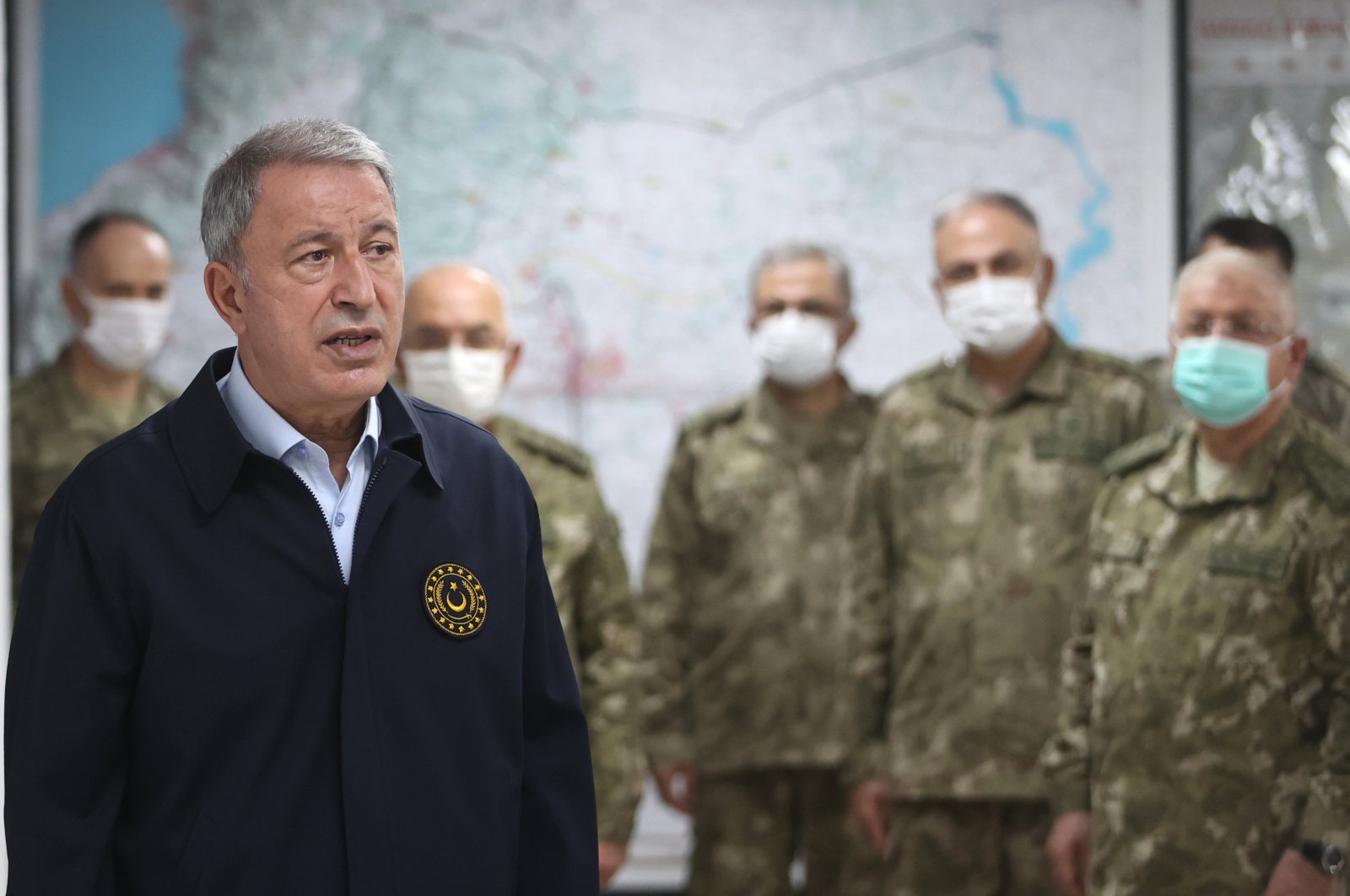 Turkish security forces have killed 1,926 terrorists in domestic and cross-border operations in the north of Iraq and Syria since the beginning of 2021, Defense Minister Hulusi Akar said Saturday.

Akar, together with the military chief and commanders of troops stationed across the border, held a meeting at the Turkish-Syrian border.

He went to the 6th Corps Command Operation Spring Shield area command on the Syrian border to discuss the latest developments and to plan activities of the Turkish military with commanders taking part in the operation zones in Syria.

Akar said Turkey did not remain silent over developments in the north of Syria and launched operations Euphrates Shield, Olive Branch and Peace Spring for the safety of its citizens and borders.

Underlining that the military operations respect the borders and sovereign rights of Iraq and Syria, Akar said Turkey's only target are terrorists. "It is out of the question for us to allow any formation in the south of our borders, whether it be called a ‘terror corridor' or something else," he said.

Since 2016, Turkey has launched four successful counterterrorism operations across its border into northern Syria to prevent the formation of a terror corridor and to enable the peaceful resettlement of residents. Those operations were Euphrates Shield in 2016, Olive Branch in 2018, Peace Spring in 2019 and Peace Shield in 2020.

"Had the Mehmetçik (Turkish soldiers) not destroyed this terror corridor, we would have been dealing with many more multifaceted problems. The value of this must be understood very well," Akar said.

Touching upon the activities in the Idlib de-escalation zone formed after Operation Spring Shield, Akar said: "There are agreements signed after our negotiations with the Russian Federation. We abide by these agreements. We have fulfilled our responsibilities and we continue to do so."

"We expect our interlocutors to comply with these agreements and their responsibilities here," he added. "The cease-fire here must continue, stability must be ensured as soon as possible," he outlined.

A safe environment must be created for Syrians there to live in comfort and security, the defense minister said.

The terrorists were killed as they were preparing an attack in the Operation Peace Spring region, the ministry said on Twitter.

Moreover, another two PKK terrorists were killed in an operation in southeastern Turkey, the country's Interior Ministry said on the same day.

The terrorists were eliminated during Operation Eren-2 in rural areas of Diyarbakır’s Lice district, said a ministry statement, adding that the operation in the region is continuing.

Operation Eren, named after Eren Bülbül, a 15-year-old killed by the PKK terrorist group on Aug. 11, 2017, began in January of this year to eliminate terrorism in the country.