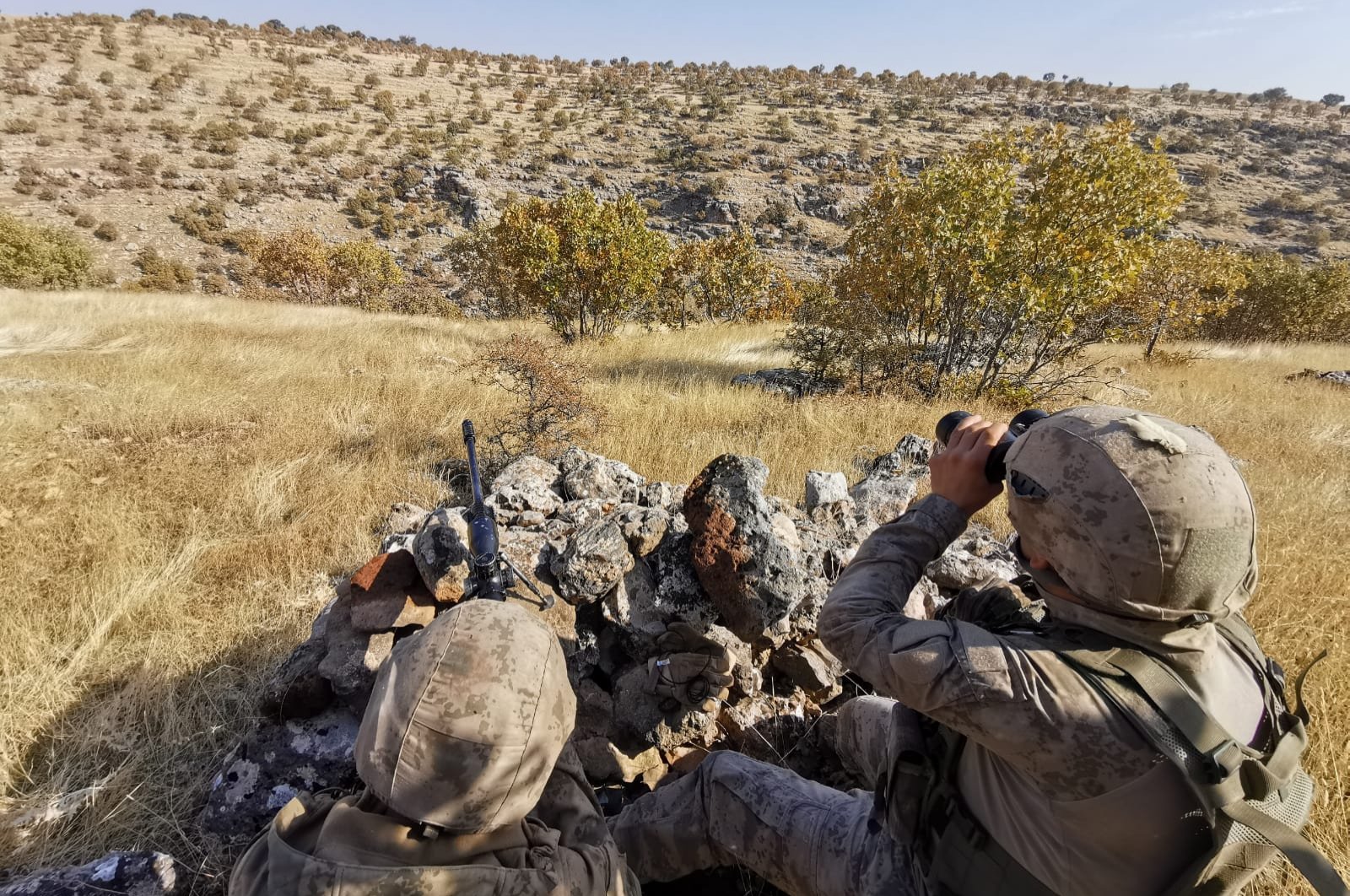 Turkish security forces that are operating both within the country and in cross-border operations eliminated 70 terrorists last month, including high-ranking YPG/PKK members.

The Turkish Armed Forces (TSK), the National Intelligence Agency (MIT), the police and gendarmerie forces continue their efforts successfully in order to ensure peace and security despite tough field and weather conditions.

According to information compiled by Anadolu Agency (AA), security forces eliminated 70 terrorists and took 104 suspects into custody, 21 of whom were arrested last month.

Last month, five security officers and two Vefa Social Support Group members lost their lives in attacks carried out by YPG/PKK terrorists while another eight were injured, seven of which were security officers.

Most recently, the Interior Ministry said Tuesday that a wanted terrorist in the eastern province of Tunceli was eliminated. Hasan Ataş was killed in the Ovacık district as part of the country's domestic security operations, the ministry said in a statement. Ataş was in the orange category of the Interior Ministry's list of wanted terrorists and was being sought with a bounty of TL 1 million ($143,365) on his head. Codenamed Serzan, he was a member of the Communist Party of Turkey/Marxist-Leninist (TKP/ML). The ministry also seized a Kalashnikov assault rifle and two grenades belonging to Ataş.

A PKK terror suspect connected to the 2011 car bombing in the capital Ankara, which claimed five lives and injured 34 in Kızılay Square, was arrested May 1. Identified only by the initials I.A., the suspect was arrested while at his father's house in the eastern province of Diyarbakır, the provincial security directorate said in a statement.

Furthermore, the terrorist organization’s alleged Mount Ağrı leaders Özer Ince, codenamed “Piro Serhat,” and Nevzat Pirbudak were eliminated in eastern Ağrı's Doğubayazıt district on May 6. Both were in the gray category of Turkey’s wanted list. It was found out that these terrorists were the perpetrators of the attack on the customs enforcement directorate in Doğubayazıt which took place on March 2 and cost the lives of two personnel.

Of the three terrorists killed May 7 in Tunceli province’s Ovacık district, one was sought under the gray category. Security forces determined that Mehmet Fatih Demir, codenamed “Mahsum,” participated in an attack on Tunceli’s Nazımiye district police station and gendarmerie in 2016, in which one sergeant lost his life.

On May 31, the Interior Ministry said that three terrorists were killed in eastern Bitlis province. The ministry said security authorities conducted an air-supported operation in Bitlis as part of domestic security operations.

Later in the day, a statement from the Interior Ministry revealed that two of the suspects who were killed were listed in the gray category of the ministry's most wanted terrorists list with a bounty of TL 500,000 ($73,300) on their heads. The ministry also stated that one of the terrorists was Veysel Altun, codenamed "Kendal," who was a suspected perpetrator of an attack in Bitlis last month that took the life of gendarmerie Maj. Zafer Akkuş.

The other gray-category terrorist who was killed was Adem Çelebi, codenamed "Şoreş Tatvan."

Some 122,054 operations, including 116,650 in rural areas, targeted PKK terrorists in 2019 alone, and have successfully detained and killed top PKK figures.

There has also been a surge in the number of terrorists laying down arms and surrendering to Turkish security forces following this series of successful domestic and cross-border anti-terror operations. Almost 50 terrorists have surrendered to Turkish forces since the beginning of 2020.