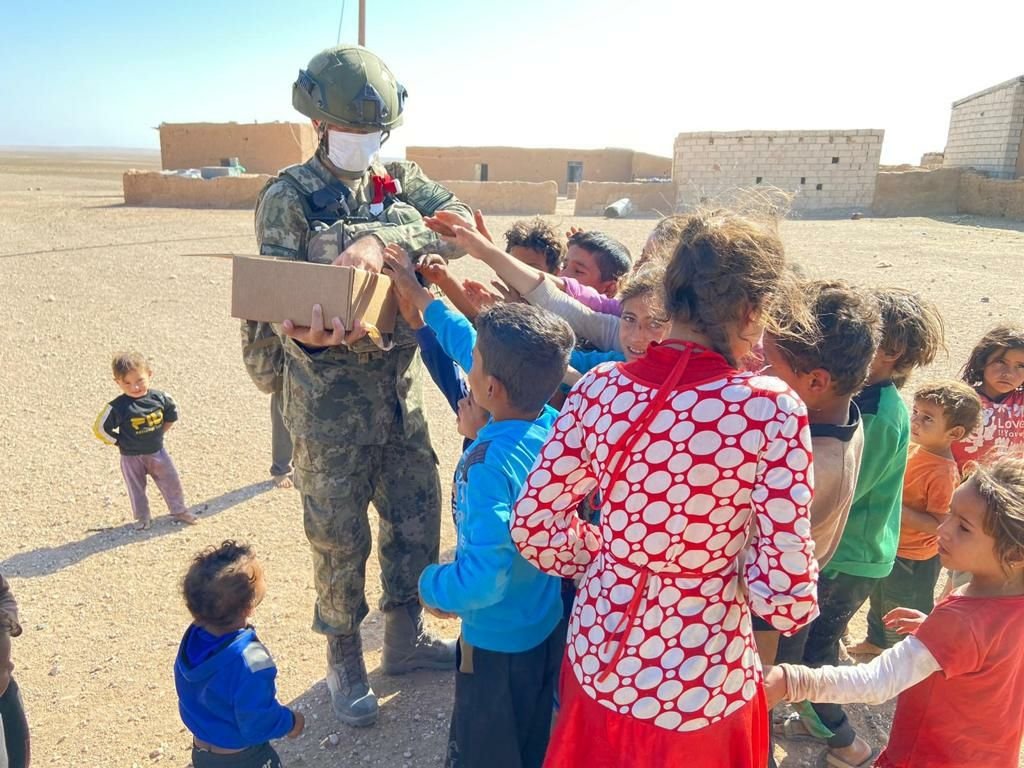 In a statement made by the ministry, it was stated that "the Turkish Armed Forces (TSK), as always and everywhere, continues to contribute to regional and global peace and stability with its humanitarian aid and (continues) to set an example to the whole world with its purity and solidity of heart."

Emphasizing that Turkish soldiers will continue to stand by the Syrian people by taking care of the innocent and oppressed, the statement said that all kind of humanitarian aid was distributed and that activities supporting the daily livelihoods – especially those of the children, who suffer the most from the instability – were carried out in the residential areas and villages in the Operation Peace Spring zone.

In this context, the statement noted that food aid and health screening services were provided to those in need, and the following statements were included: "Our soldiers, who did not forget the children, provided cartoons for them to watch and contributed to the formation of a smile on their faces. In addition, drinking water was provided by tankers to settlements suffering from water shortages in the region. The Turkish Armed Forces will continue to provide hope to the innocent and oppressed and contribute to the normalization of life in the region by extending the helping hand of our country to the region, as it has done so far."

The operation, conducted in line with the country's right to self-defense borne out of international law and United Nations Security Council resolutions, aimed to establish a terror-free safe zone for the return of Syrians in the area east of the Euphrates River that was then controlled by United States-backed YPG terrorists, which is the Syrian branch of the PKK terrorist group.

Since the launch of the operation, Turkey has been supporting every aspect of life in the region, from health to education and security to agriculture. In this respect, efforts to clear bombs and improvised explosive devices were launched and administration responsibilities were given to local councils. The country also rolled up its sleeves to reconstruct hospitals, schools, mosques and roads destroyed by the YPG/PKK. Within the scope of ameliorating the region's social infrastructure, people were provided with food and clothing by several nongovernmental organizations (NGOs), while roads and buildings were rebuilt. These efforts paid off as hundreds of displaced Syrians started to return to the liberated areas.