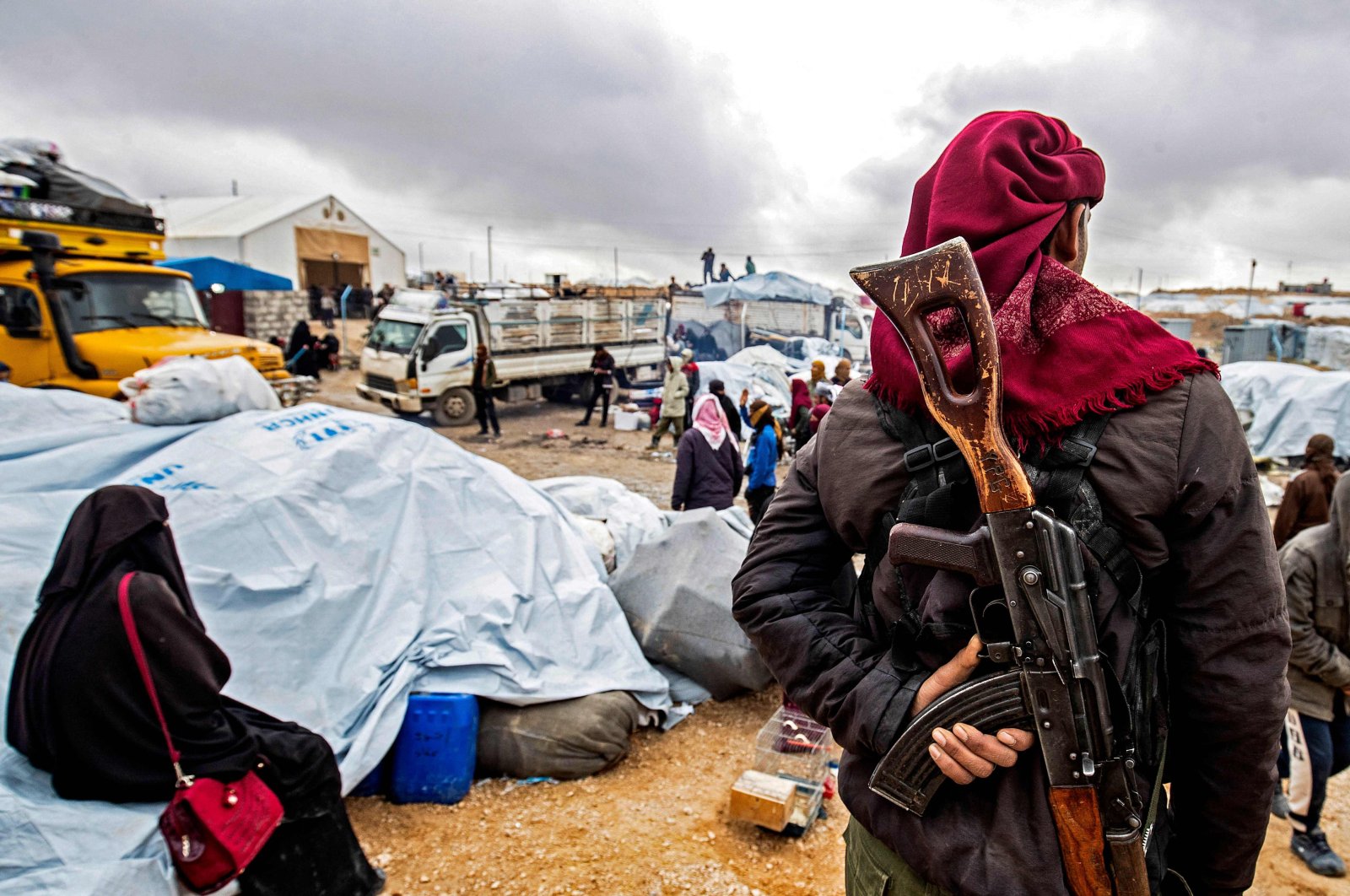 A YPG terrorist watches as families load their belongings onto trucks before leaving the YPG-run al-Hol camp holding relatives of Daesh terrorist group fighters, in the Hassakeh governorate in northeastern Syria, Nov. 16, 2020. (Photo by Delil Souleiman/AFP)
by Anadolu Agency May 02, 2021 4:27 pm
RECOMMENDED

The PKK terrorist group's Syrian branch, the YPG, which is backed by the United States, forced a teenage girl and her cousin to become suicide bombers after terrorists raped the young girl.

Living in Manbij district, which is under the terrorists' occupation, 27-year-old N.M. from Raqqa and her uncle's daughter, 17-year-old R.M., were arrested by security forces in Afrin where they were sent for suicide bombing.

Speaking to Anadolu Agency (AA), N.M. said a terrorist codenamed Haji offered them $1,500 in return for delivering an item to someone in Afrin.

"We didn't accept it at first as we didn't want to go out of Manbij," she said, adding that they did not know the item was a bomb.

"I did not accept the offer on the excuse that my children and husband were sick. Then he showed me the video on his phone," she said, referring to a video that showed a terrorist raping her uncle's daughter.

N.M. said she was shocked but agreed to make the delivery and come back the same day. Both were handed heavy vests and mobile phones for communication before they set out for Afrin.

Stressing that they were unaware of being sent as suicide bombers, N.M. said, "Our only aim was to give the items to a woman."

She said they were left in the middle of a road, but nobody came to collect the items. They were then asked to go to a mosque, push the buttons and cut a blue cable on the vests after opening the zippers.

"My uncle's daughter tried to open it but she couldn't. Then the security forces came," she said. "We then realized what we were carrying."

She said they would never have carried the vests if they knew they were packed with explosives.

R.M. also explained what she went through, saying she met Haji through Tarik who works for the terrorist group.

She said that Tarik took her somewhere for a job. "There were other men there. I didn't want to get out (of the car)."

R.M. said she was forced to get out, raped and then blackmailed to do as they say. "If I knew I was carrying a bomb, I would have said no," she said. She added that she was forced to comply with the demands of the terrorists due to fear for her family.

Local people living in areas held by the group have long been suffering from YPG atrocities. Numerous human rights organizations have documented the YPG's violations of human rights including torture, recruiting child soldiers and burning civil buildings. The group also systematically and forcefully displaced Arabs from their homes in line with their "Kurdification" policy in traditionally Arab towns.

In its more than 40-year terror campaign against Turkey, the PKK – listed as a terrorist organization by Turkey, the U.S. and the European Union – has been responsible for the deaths of at least 40,000 people, including women, children and infants. The YPG is the PKK's Syrian offshoot.