Turkish Presidency: UK cyclist Cavendish did not step down the podium to protest Erdoğan’s speech 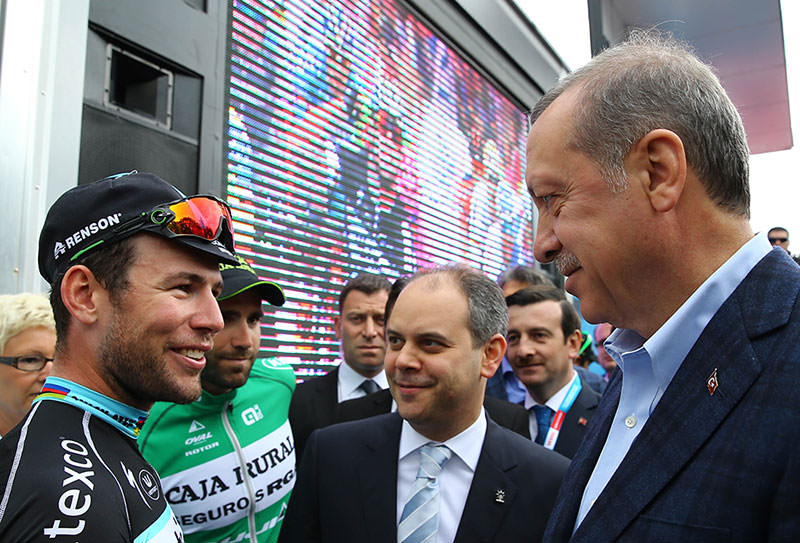 Mark Cavendish (L), President Recep Tayyip Erdou011fan (R): AA Photo
by Daily Sabah May 03, 2015 12:00 am
The British cyclist Mark Cavendish, who finished the final stage of the Presidential Cycling Tour of Turkey in second place, did not step down the podium after he was awarded his medal by President Erdoğan as a form of protest to Erdoğan's speech, as it was claimed by some media outlets, the Turkish Presidency said through its Twitter account on Sunday.


Also, I'm a sportsman & have no political agenda in Turkey! What I do know is that it's a beautiful place, with incredibly welcoming people.


The presidency said, the world-famous cyclist got off the platform, since it was a customary manner of procedure that the sportsman had to be called once again to the platform if he had won more than one medal, which was the case for Mark Cavendish. The athlete was rewarded medals in three classifications on Sunday: 'individual stage', 'sprint' and 'beauties of Turkey.'

On the other hand, some media outlets claimed that President Recep Tayyip Erdoğan's security guards brought the cyclist back to the stage, after he allegedly stepped down due to Erdoğan's speech.

The President's Twitter account said on Sunday, Cavendish had a conversation with Erdoğan following the award ceremony, during which he said: "The Cycling Tour is great. I am very happy to have come to Turkey. I will also come in the following years."

Cavendish has three stage wins in this year's Tour of Turkey. This was the second time he has taken part in the Tour. Last year, Cavendish, again racing for the Etixx-Quick-Step team, won four stages of the Tour and was awarded the best sprinter award.