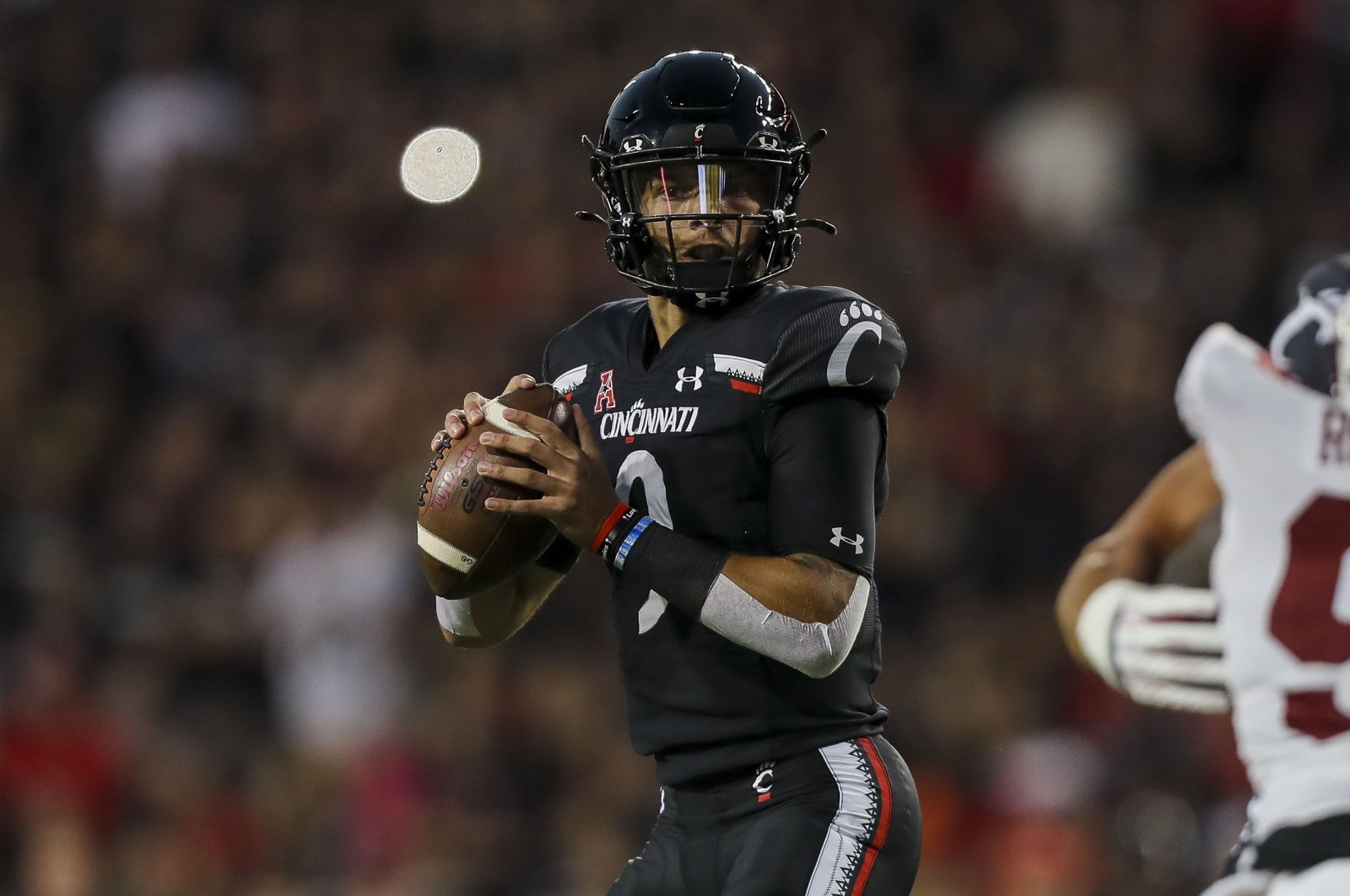 Cincinnati Bearcats quarterback Desmond Ridder (9) drops to throw a pass against the Temple Owls in the first half at Nippert Stadium, Cincinnati, Ohio, U.S., Oct. 8, 2021. (Katie Stratman-USA TODAY Sports via Reuters)
by ASSOCIATED PRESS
Oct 09, 2021 11:49 am

The No. 5 Cincinnati Bearcats and No. 22 Arizona State Sun Devils notched victories over Temple and Stanford respectively on Friday, ushering in a perfect start to the weekend for Top 25 teams after No. 15 Coastal Carolina also finished off Arkansas State on Thursday.

Jerome Ford ran for a career-high 149 yards and two scores to help Cincinnati (5-0, 1-0 American) avoid a letdown after their big victory at Notre Dame last week.

The home streak is the second-longest in the country, behind Clemson at 31. Temple is the last team to beat the Bearcats at Nippert Stadium, edging them 35-24 in 2017.

Temple (3-3, 1-1) has played Cincinnati tough in recent years with the previous three meetings decided by a combined 20 points, including a 15-13 victory by the Bearcats in the last meeting in 2019.

The Owls’ only points came on a career-long 55-yard field goal by freshman Rory Bell.

In Tempe, Arizona, Deandre Pierce scored a 27-yard touchdown on a lateral off an interception and Arizona State rode its explosive run game to a win over Stanford.

The Sun Devils (5-1, 3-0 Pac-12) exploited one of the nation’s worst run defenses, racking up 255 yards and three touchdowns on the ground. Jayden Daniels provided the balance, throwing for 175 yards and running for 76 more, including a 51-yard touchdown.

“When you run for 200-plus, you're going to win a lot of games,” Arizona State coach Herm Edwards said. “It was fun to watch the runners run.”

Their defense gave up some big plays in the passing game, but kept the Cardinal out of the end zone in the second half and created three turnovers.

Stanford (3-3, 2-2) had no answer for Arizona State's run game and became one-dimensional offensively after falling behind, limited to 9 yards rushing on 20 carries.

Tanner McKee threw for 356 yards and a touchdown, but had his first three interceptions of the season.

“We got into position multiple times and stalled,” Stanford coach David Shaw said. “The defense gave the offense opportunities in the second half and the offense didn’t take advantage.”

Both teams were coming off big wins.

Stanford took down Oregon 31-24 by sending the game to overtime with a touchdown on an untimed final play of regulation.

Arizona State picked up one of its biggest wins under Edwards, knocking off then-No. 20 UCLA 42-23.

The Sun Devils kept rolling against the Cardinal with an onslaught of big plays.

Daniels scrambled through a hole up the middle, ran away from two Stanford defenders who collided and raced off for a 51-yard touchdown run on Arizona State's opening drive.

Raachad White scored on a 5-yard run, one play after leaping a defender for a 29-yard gain. The Sun Devils pulled off consecutive trick plays covering 54 yards, the second Elijhah Badger's 22-yard TD run on a reverse to lead 21-7 at halftime.

“When we get off to a fast start, it puts us in a good position,” Daniels said.

Arizona State's offense stagnated in the second half, but the defense came up with the big plays when it needed.

Stanford had some early success on offense and scored when McKee hit Elijah Higgins on a 6-yard corner fade. The Cardinal stalled after that and McKee threw his first interception of the season on a pass that caromed off two players’ hands in the closing seconds of the first half.

An interception-lateral TD put Arizona State up 28-10 in the third quarter and Jordan Clark came up with Arizona State's third interception when McKee threw behind a receiver in the fourth.

“We just weren't able to finish our drives,” said Stanford tight end Benjamin Yurosek, who had six catches for 118 yards. “We've got to get better.”