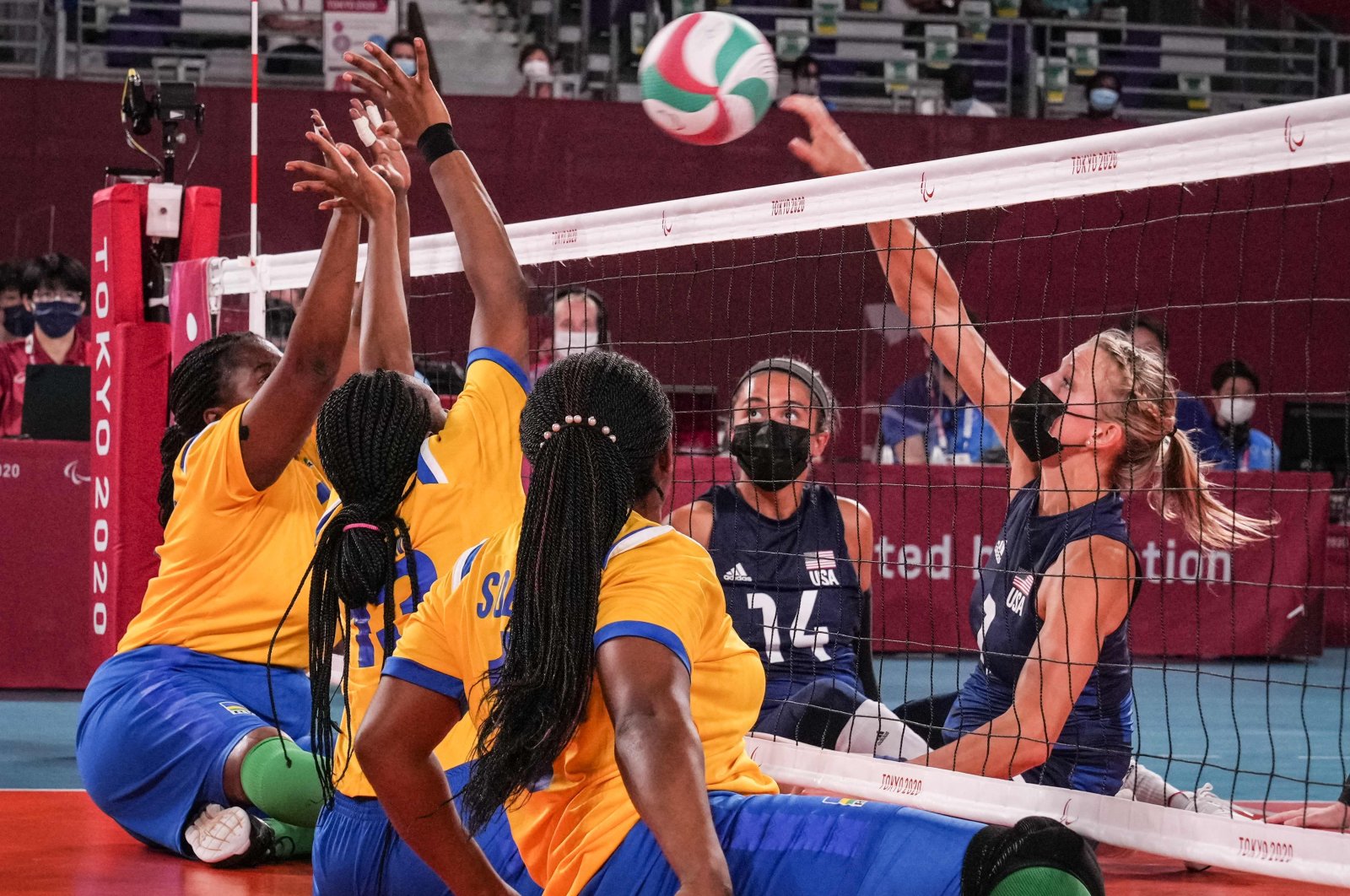 USA's Lora Webster (R) spikes the ball during the sitting volleyball pool match between USA and Rwanda during the Tokyo 2020 Paralympic Games at Makuhari Messe Hall in Chiba, Japan, Aug. 28, 2021. (Photo by Yasuyoshi CHIBA via AFP)
by ASSOCIATED PRESS Sep 02, 2021 11:07 am
RECOMMENDED

For American sitting volleyball player Lora Webster, the game's phrase "bump, set, spike" has taken on a whole new meaning – the USA team member is competing at the Tokyo Paralympics for her fifth medal while five months pregnant with her fourth child.

"I don’t really remember half the time that I'm pregnant when I’m playing, except for the occasional kick I get while I’m on the court," said the 35-year-old Webster, who lost her lower left leg to bone cancer when she was 11.

"I just have to be more conscious of how I’m diving," she added in an interview with The Associated Press (AP).

"When I do dive, I have to consider I’m not diving straight on my stomach.”

Pregnancy. Paralympics. They go together for Webster. She going for her fifth medal in her fifth Paralympics, and a couple merit asterisks. This is the second Paralympics in which she's been pregnant, and the third time during a competition.

She and her American teammates face Brazil on Friday in the semifinals with a possible gold-medal game on Sunday on the closing day of the Games.

"It’s not dangerous as long as you have a healthy pregnancy,” she said. "But it just seems bizarre to be so far along and competing.”

Webster won gold five years ago in Rio de Janeiro to go with silver medals in London and Beijing, and a bronze in her first Games in 2004 in Athens.

"My body has been playing volleyball for 18 years. The movement are normal," Webster said. "My body is trained in it, so my body is able to balance both the pregnancy and the competition fairly well.”

Sitting volleyball follows most of the same rules as standing volleyball. There are six players on a side, but the court is smaller – 10 meters by 6 meters (about 32 by 20 feet) – and the net for women is set at 1.05 meters. Impairments can be to the lower or upper limbs, or both.

Webster played standing volleyball in high school, wearing her prosthetic, and said she was offered a college scholarship. Instead, she started focusing in 2003 on the sitting game. She said she trains mostly at home with her three children – Madi, 10, Cole, 8, and Kyle, 6 – and her husband Paul.

Webster underwent a surgery known as "rotationplasty," which involves removing the middle part of the leg, and moving up the ankle joint – but rotating it 180 degrees – to replace the knee. The ankle then flexes in the same direction as the knee, and the foot fits into the prosthetic leg. "A prosthetic is just something you use to get there, just like a good pair of shoes makes a runner even better," Webster said.

"A good prosthetic makes an athlete and an amputee just as able as they were with two unaltered legs. A prosthetic is really just a tool to get us to go where we want to go.” Webster talked at length about Paralympians being more than just athletes, but also messengers for what is possible.

"Once you’re an athlete, you’re always going to find a way to continue to be an athlete – prosthetic or not,” she said.

She told the story of meeting a woman at the beach who hadn't worn shorts for 35 years, ashamed of revealing her amputation and drawing stares. "The stigma of disability is much heavier than the actual disability that many of us carry," she said. "Just because you are faced with a disability, it doesn’t mean it derails the goals that you have," she added.

"A disabled person’s goals can still be the same as an able-bodied person’s goals. The difference is just how we get there. Our limitations are mostly the ones put on us by other people, not ones that we put on ourselves.”

Webster said she can do almost anything, though she singled out one impossibility. "Sitting in a normal airplane seat,” she said. "But that’s not just me, that’s plenty of able-bodied people, too.”