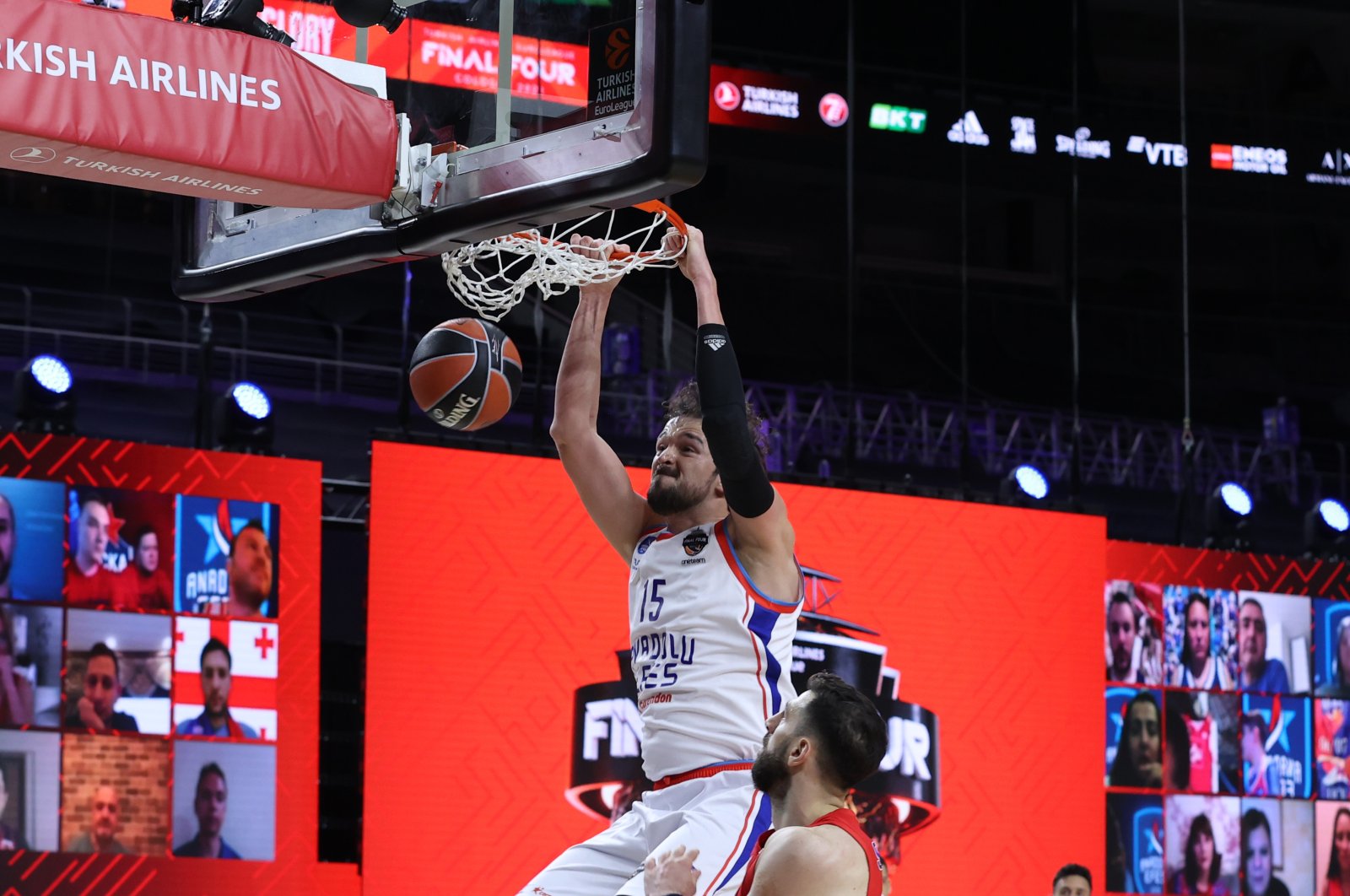 Anadolu Efes' Sertaç Şanlı dunks during the match against CSKA Moscow at the Lanxess Arena in Germany's Cologne on May 28, 2021 (AA Photo)
by Agencies May 29, 2021 12:58 am
RECOMMENDED

The club used a 25-15 run in the first quarter, hitting 5/6 from the 3-point line at Lanxess Arena in Cologne, Germany.

Anadolu Efes had a 71-55 lead going into the final quarter, but CSKA Moscow managed to come back in the final frame.

Despite the Russian side's brave effort in the fourth quarter, scoring 31 points, the Turkish club managed to hold on for the final ticket.

For the CSKA Moscow, Will Clyburn was the highest scorer with 26 points, while Daniel Hackett helped the Russian club with 17 points.

In a post-match interview, Anadolu Efes head coach Ergin Ataman said that the team played perfect basketball for three quarters but then they made incredible mistakes in the last quarter.

"We had perfect defense for three quarters. Nobody could find scores inside -- Shengelia, Voigtmann. But Clyburn and Hackett [beat us] on the easy pick-and-roll attack. Okay, defensively we made those mistakes, but offensively, especially after Micic had the fifth foul, we stopped playing. But we will play in the final and I hope we will not make these mistakes again in the final," he added.

Efes to play against Barça in final

Meanwhile, double NBA champion Pau Gasol reached the first Euroleague final of his trophy-laden career as Barcelona edged Armani Milan 84-82 in a riveting clash on the same day to set up a title showdown with Anadolu Efes.

Gasol, who won back-to-back titles with the Los Angeles Lakers in 2009 and 2010, will head into Sunday's clash with Efes after losing to the Turkish side in the 2000 Euroleague third-place match during his first stint with Barcelona.

The iconic 40-year old center, who won the 2006 world championship and three European titles with Spain, contributed to his boyhood club's win with a superb cameo appearance in the first half.

Gasol rolled back the years to score 10 points in five frantic minutes as Barcelona clinched the roller-coaster clash after Cory Higgins nailed a mid-range shot with eight-hundredths of a second left on the clock.

Milan had roared back from an 11-point deficit to lead 67-59 late in the third quarter but Barcelona forced the final twist in the home straight thanks to 21 points and six rebounds from former Chicago Bulls forward Nikola Mirotic.

"We were 10 points up and then they came back and turned the match on its head but we found a way to win," Mirotic told Euroleague television.

"We know the job is not done because there is one more game left. It's been a long season but this team fights and sticks together. We need one more performance."