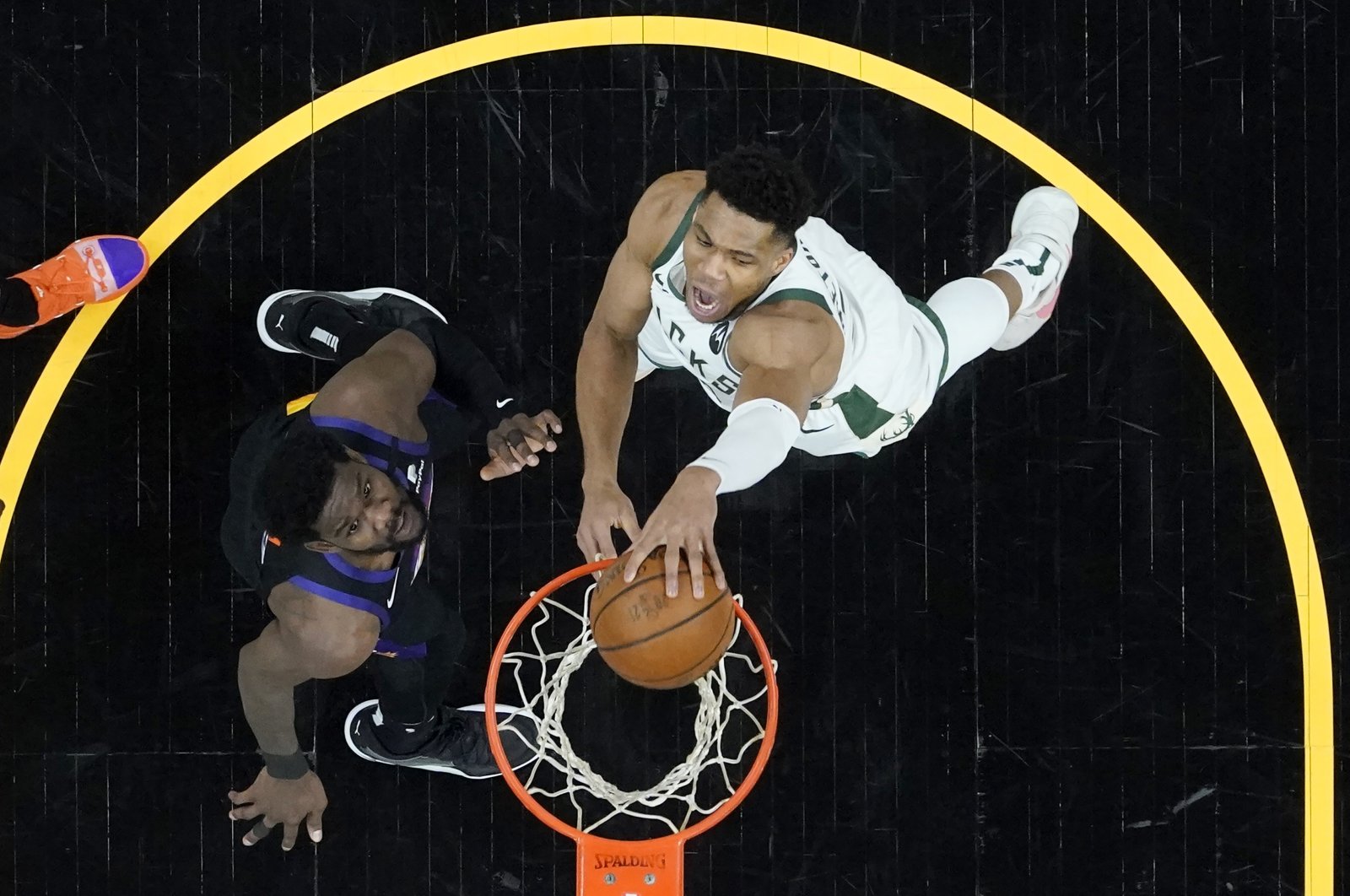 After inspiring a Milwaukee Bucks recovery from 2-0 down in the NBA Finals, Giannis Antetokounmpo now has the opportunity to join a rare set of legends by sparking his side to victory in the NBA Finals over Phoenix Suns.

The 26-year-old Greek forward has averaged 32.2 points, 14.0 rebounds, 5.5 assists, 1.75 steals and 1.5 blocked shots a game so far in the best-of-seven championship series, which is deadlocked at 2-2 entering Saturday's Game 5 at Phoenix.

"We're within reach of our goals," Antetokounmpo said. "We've got to keep getting better. We have to keep taking steps forward and keep playing good basketball."

After losing the first two games in Phoenix, the Bucks rallied at home and have a chance to become only the fifth team in the league's 75-year history to fight back from an 0-2 finals deficit to win the crown.

LeBron James sparked Cleveland to the 2016 title after the Cavaliers lost the first two games to Golden State while Dwyane Wade and Shaquille O'Neal rallied Miami out of an 0-2 hole to defeat Dallas in 2006.

Boston's Bill Russell won the last of his record 11 NBA crowns in 1969 by leading the Celtics from 0-2 down to beat the Los Angeles Lakers and center Bill Walton powered Portland's lone title run in 1977 after dropping the first two games to Philadelphia.

"With his size, his speed, his strength, his ball handling, to play in the open court, to play as fast and as attacking with vision, the ability to get into the paint and finish and find shooters, I think is unique.

"The way he's grown defensively, his ability to guard at the perimeter, guard at the 3-point line, block shots at the rim, rebound – he's incredible."

Antetokounmpo won the 2019 and 2020 NBA Most Valuable Player awards and the Bucks had the NBA's best record in each season.

But Milwaukee flopped each time in the playoffs, falling to Toronto in the 2019 Eastern Conference finals after winning the first two games and ousted by Miami in the second round last year.

Those failures help push the Bucks as they chase their first NBA title in 50 years while the Suns seek their first in team history.

"We cannot be satisfied," Antetokounmpo said. "Hopefully we keep building winning habits, make winning plays and we can put ourselves in a position to win."

Antetokounmpo has built a partnership with Bucks guard Khris Middleton, the inside-outside combination becoming smooth after years of work together.

"Giannis is playing with everybody," Budenholzer said. "The connection with him and Khris, there's a big-time comfort there."

Heart and soul of Bucks

Bucks guard Jrue Holiday has called Middleton the heart of the team and Antetokounmpo its soul.

"For them to be able to perform on each stage, and especially a stage like this, is awesome to see," said Holiday. "They give us confidence as a team and they carry us."

Middleton joined the Bucks in a 2013 trade with Detroit and Antetokounmpo was the 15th overall pick in the 2013 NBA Draft by Milwaukee.

"They have been criticized for everything they have done here and they have also got the glory. But they know the pressures that comes with that and they have exceeded all those expectations."

Antetokounmpo signed a five-year contract extension last December worth $228 million, the NBA's richest deal, to stay with the Bucks.

Part of the reason was seeing how Middleton battled through feeling bad to grind through a playoff game.

"That's when I realized, yeah, that's the guy I want to be on the line with and go through the journey with," Antetokounmpo said. "That's the dude I want to build a legacy with."