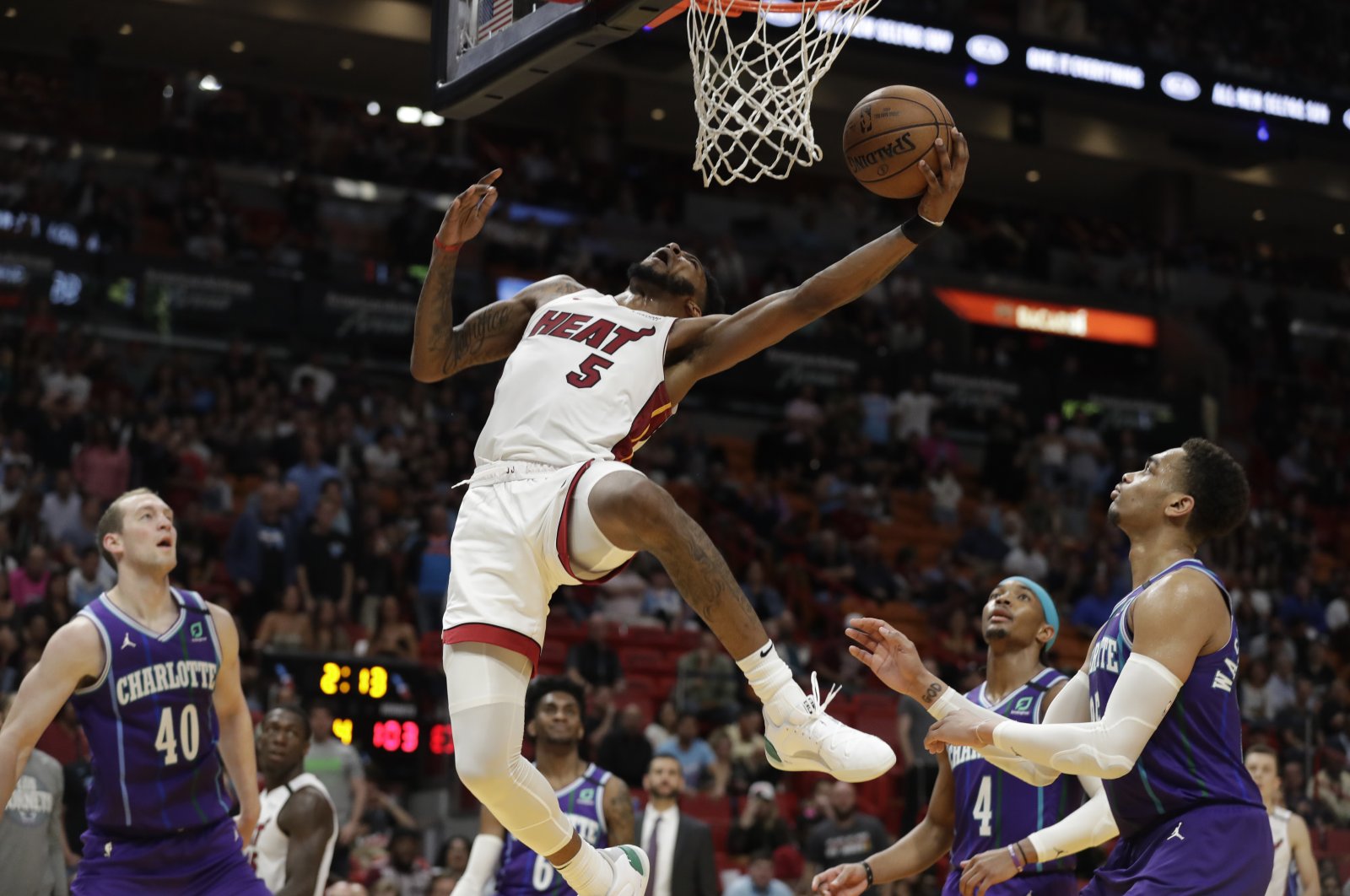 Miami Heat forward Derrick Jones Jr. (5) goes up for a shot during the second half of an NBA basketball game against the Charlotte Hornets, in Miami, March 11, 2020. (AP Photo)
by German Press Agency - DPA Mar 31, 2020 2:21 pm
RECOMMENDED

Similar to the rest of the world, the NBA faces an uncertain future as questions remain on when the league will resume the season, or whether it will resume at all. But to answer those, organizers and officials need to answer another, much more important question: How can the league play if there's still a chance that a player, coach or staff member can contract COVID-19?

"It would be tough to lose any kind of season," veteran Heat forward Udonis Haslem said on a conference call with reporters last week. "But right now there are bigger things going on than basketball. So it's really kind of hard to focus on basketball. But just like anybody else, I'm wondering if we're going to get back to work soon."

These are just some of the questions surrounding the NBA after the season was suspended on March 11 amid the coronavirus pandemic. The shutdown is expected to last at least another month, with U.S. President Donald Trump extending restrictive social distancing guidelines on Sunday through April 30.

In reality, though, the league shutdown will likely last even longer than that, as the Centers for Disease Control and Prevention (CDC) recommended earlier this month that "organizers (whether groups or individuals) cancel or postpone in-person events that consist of 50 people or more throughout the U.S." until the week of May 11.

NBA owners and executives are preparing for the possibility of mid-to-late June as a best-case scenario for the league's return, according to reports. Under that timetable, the season could extend into August or early September.

The Chinese Basketball Association's struggles to restart the season foreshadows how challenging resuming the NBA could be when the spread of the coronavirus slows down enough to consider such an action. The CBA is months ahead of the U.S., with the outbreak shutting down the Chinese league in January.

The CBA season was set to resume the first week of April, then it was moved to April 15. Now, according to ESPN, the restart has been delayed again to late April or early May, which extends the break to more than three months.

According to ESPN, the CBA is considering "clustering teams in one or two cities and playing one another in a round-robin format in empty arenas over several weeks" when the season resumes, creating a bubble that keeps the league away from the new coronavirus.

"Teams would live and play in a constantly monitored environment, with players' temperatures checked several times a day," Windhorst wrote.

If this plan works for the CBA, can the NBA use a similar strategy?

According to ESPN, ideas that have been discussed by NBA players and executives include using a casino property in Las Vegas, one that's big enough to host everything in a single location. Another suggestion is to play in the Bahamas, where a resort like Atlantis has courts constructed in ballrooms.

Even if the NBA can continue the season in the coming months, there are still plenty of unknowns surrounding the league.

"I think at first, it sounded like a crazy idea," Haslem said of playing games in empty arenas. "But I think all players will probably rethink the way they felt about it when they initially heard the idea of it."