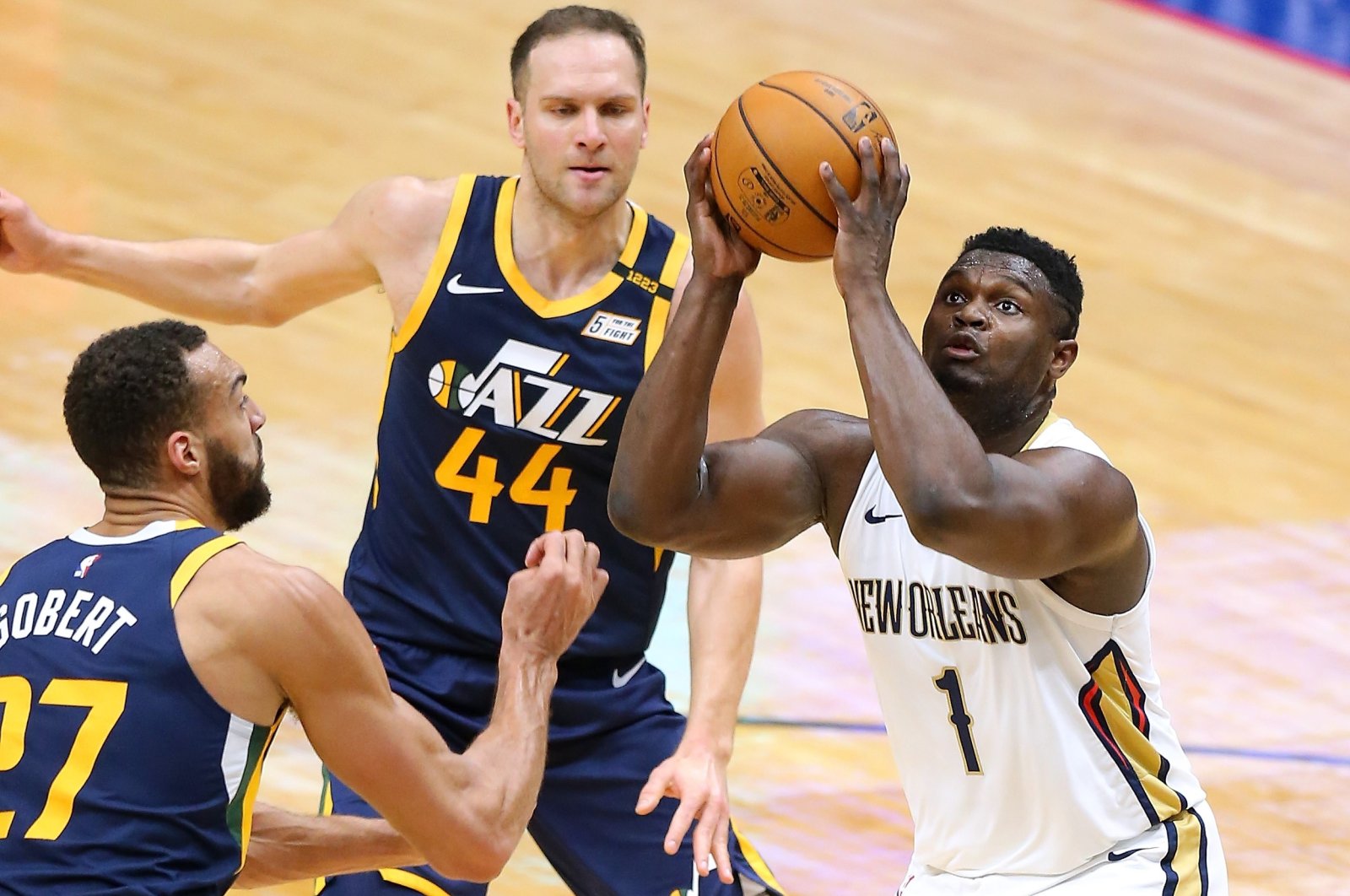 Zion Williamson produced a dominant performance as the New Orleans Pelicans upset the league-leading Utah Jazz with a 129-124 victory on Monday.

Pelicans prodigy Williamson finished with 26 points, 10 rebounds and five assists to give New Orleans a deserved victory over the Western Conference-leading Jazz.

It was the sort of display from the 20-year-old Williamson that made him one of the most coveted young players in years when he was snapped up by New Orleans two years ago with the No. 1 pick in the Draft.

Against Utah on Monday, the 6-foot-7 (2 meters), 284-pound (129 kilograms) powerhouse used his physique and skill to barrel through the Jazz defense.

Utah had led by nine points in the second period but were left trailing by 17 early in the fourth quarter as the Pelicans cut loose.

Although Utah closed to within one point with 47 seconds remaining, two Williamson free throws restored the Pelicans' three-point cushion before Josh Hart added the coup de grace after Mike Conley missed for Utah.

Point guard Lonzo Ball added 23 points, while J.J. Redick had 17 off the bench including three of four three-pointers.

Utah's scoring was led by Bojan Bogdanovic, who finished with 31 points, while Rudy Gobert had 22 points and Donovan Mitchell 21.

The contest pivoted in the third quarter when the Pelicans erupted for 40 points.

"We find ourselves in situations like this all the time," Williamson said afterward. "It's a matter of want. And tonight we wanted it more.

"We came out with better energy in the third quarter and got the win."

The Pelicans improved to 15-19 and are now 11 in the Western Conference standings. Leaders Utah fell to 27-8 following the loss but remain three games clear of the second-placed Los Angeles Lakers.

Brooklyn led by 10 points with two minutes remaining before the Spurs rallied to force overtime through Dejounte Murray's pull-up jump shot on the buzzer.

But Irving – who finished with 27 points – made two crucial three-pointers in overtime to see the Nets through to victory, leaving them firmly on the tail of Philadelphia at the top of the Eastern standings. Harden, who added a three-pointer in overtime, weighed in with 30 points.

The Nets are now within half a game of the Sixers with 23 wins and 13 losses.

In Philadelphia, Joel Embiid scored 24 points and hauled down 13 rebounds as the 76ers bounced back from their shock weekend defeat to the Cleveland Cavaliers with an emphatic win over the Indiana Pacers.

Embiid added five assists and two turnovers in a dominant 130-114 victory over the Pacers that improved the Sixers to 23-12 at the top of the Eastern Conference.

"We have to make it easier for him to have the answers," Sixers coach Doc Rivers said of Embiid's display. "I thought he was patient, and he just made the right reads. That was really good."

Shake Milton had 26 points off the bench, while Furkan Korkmaz nailed six three-pointers in a 19-point haul. Ben Simmons added 18 points after making seven-of-11 attempts from the field.

"We had to get stops and I thought we did that. I love how we spaced the floor. That's why I was so upset the other night – we had no spacing."

Malcolm Brogdon led the Indiana scorers with 20 points on a night when six Pacers players made double figures.