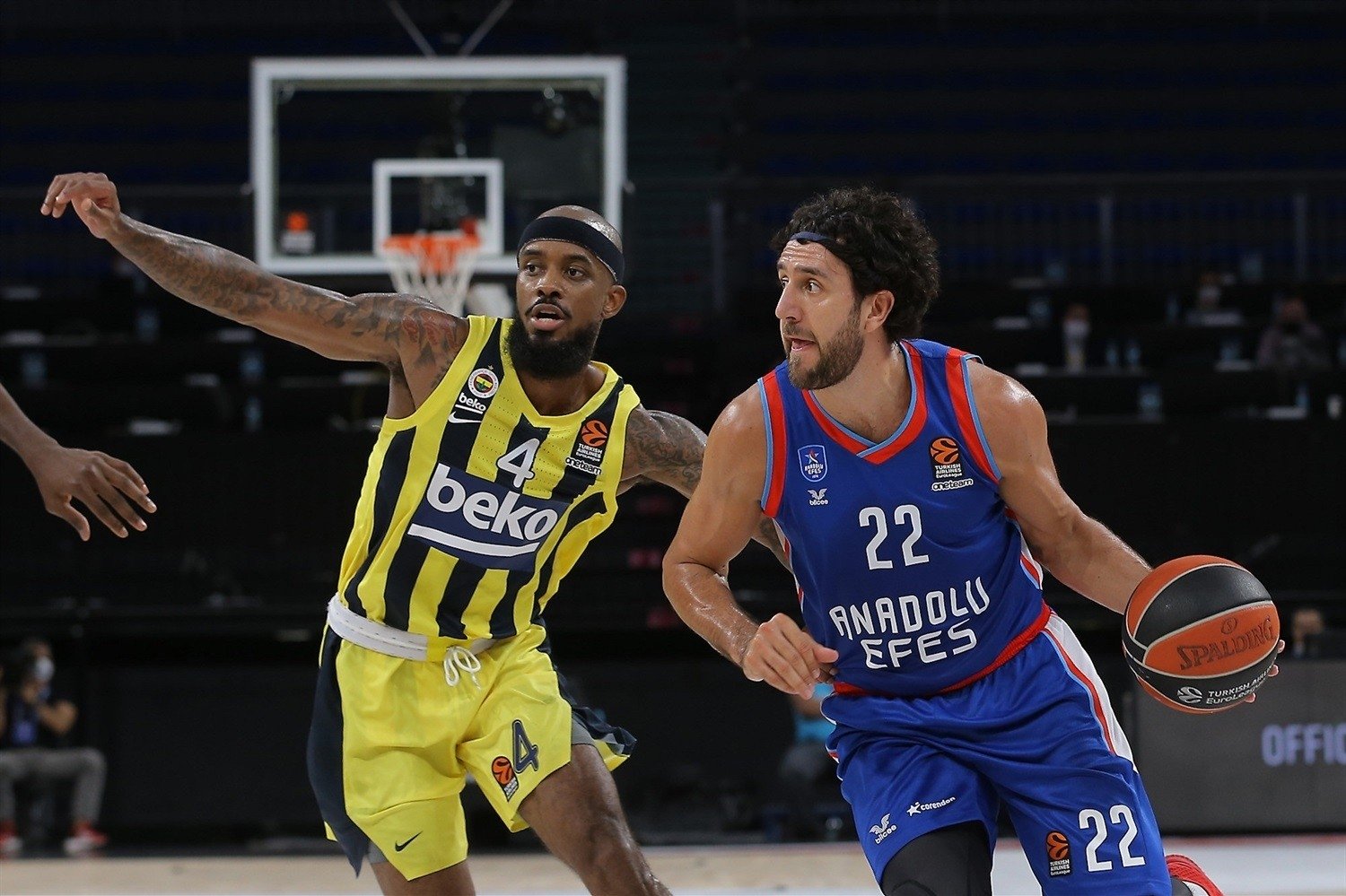 Turkish basketball giants Fenerbahçe and Anadolu Efes go head-to-head in their THY EuroLeague Round 26 match in Istanbul on Friday.

Fenerbahçe (15-10) is currently on a 10-game winning streak and arrives at the Turkish derby in scintillating form. The team is led by Nando De Colo with 14.4 points per game (ppg) and 4.1 assists per game (apg), Jan Vesely with 13.0 ppg, 5.3 rpg and Marko Guduric on 12.2 ppg, 3.5 apg, according to the EuroLeague’s official website.

Anadolu Efes (14-10), on the other hand, has also been really solid lately, winning six of its last seven EuroLeague games.

Vasilije Micic with 15.2 ppg has been its top scorer until now, followed by Shane Larkin’s 15.1 ppg and Krunoslav Simon’s 10.9 ppg.

De Colo and Larkin are arguably the two players in the best shape in the whole EuroLeague. Larkin has been unstoppable so far this season, averaging 21 points, three steals, six fouls drawn and a Performance Index Rating (PIR) of 26.0 in his team's last three games, all of them victories.

Earlier this season, Fenerbahçe defeated Efes 71-80 in the first Turkish derby of this EuroLeague season on Oct. 8, 2020.

Efes had a nine-point lead in the first half, but Fenerbahçe fought hard to take a lead before halftime and did not falter to claim a huge win on the road.

De Colo led the side with 20 points while Lorenzo Brown added 17 and Vesely had a double-double with 13 points and 10 rebounds.

For Efes, Simon starred with 24 points, but Rodrigue Beaubois (11) was the only other player to score in double figures for the home team.

Fenerbahçe will look to Guduric to deliver during the key fixture. The Yellow Canaries are 10-0 since he joined the team. He balanced his team's offense with his excellent spacing, 3-point shots and passing skills.

On defense, Fenerbahçe should play physical against Micic and Larkin, and will rely on Brown and Edgaras Ulanovas to do so.

Finding Vesely and Kyle O'Quinn down low are also one of the biggest keys to this game, as it would give De Colo, Jarrel Eddie and Guduric more opportunities to play one-on-one and find good shots from outside the arc.

For Fenerbahçe’s city rival Efes, stopping Vesely down low should be a priority. The team will count on Bryant Dunston, Sertaç Şanlı and Tibor Pleiss to play strong, physical defense.

Last week, Efes excelled on defense against Olympiacos Piraeus, allowing just 25 points in the final 29 minutes of their Round 25 game.

That defensive approach could well be needed against a talented team like Fenerbahçe. As always, Efes should run its offense through Micic and Larkin, two great, unselfish scorers who also can find their teammates in double-team situations.