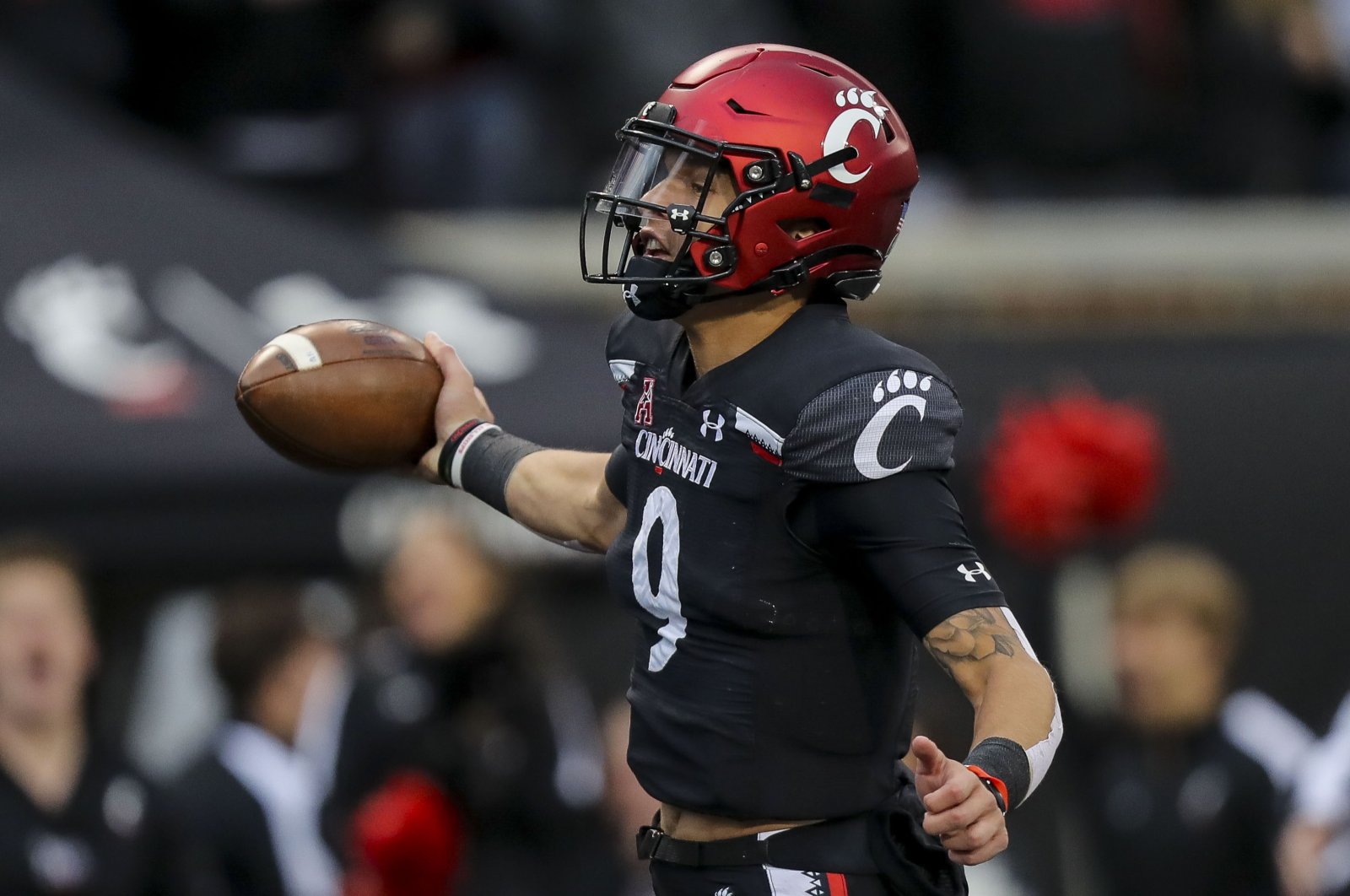 Cincinnati Bearcats quarterback Desmond Ridder (9) runs the ball in for a touchdown against the Southern Methodist Mustangs in the first half at Nippert Stadium, Cincinnati, Ohio, U.S., Nov. 20, 2021. (Katie Stratman-USA TODAY Sports via Reuters)
by ASSOCIATED PRESS Nov 21, 2021 11:00 am
RECOMMENDED

The Cincinnati Bearcats (No. 2 AP, No. 5 CFP) have every reason to be optimistic in the final weeks of the college football season after racking up "style points" against Southern Methodist and then seeing Oregon's playoff hopes end at the hands of Utah. However, the optimism should be of the cautious variety, as the College Football Playoff (CFP) committee could still find a way to keep the Bearcats out of the main attraction.

Consider the following: Alabama will slip to No. 3 in the CFP after a close game against Arkansas, while Ohio State jumps to No. 2 and Michigan leapfrogs Cincinnati to land at No. 4 on Tuesday. Then on rivalry weekend, Michigan knocks off Ohio State in the closest of games, perhaps a nine-OT affair, sending the Buckeyes to No. 4 and Michigan to No. 2 or No. 3. Then consider that Alabama beats Georgia by the thinnest of margins in the SEC title game. The CFP would no doubt simply reshuffle the top three of Michigan, Georgia and Alabama. Cincinnati will certainly be hoping the Buckeyes continue their dominance of Michigan so this scenario doesn't play out, but at the end of the day, the Bearcats still have the odds stacked against them.

The Bearcats caught a lot of flak over the last month for failing to hammer four straight second-division American Athletic Conference opponents.

Facing what was supposed to be one of the toughest tests on their schedule, the Bearcats unloaded on SMU with a do-it-all performance by Desmond Ridder. Cincinnati's most complete game of the season clinched a spot in the AAC title game against No. 17 Houston and should help bolster its CFP hopes.

Utah, led by former Cincinnati running back Tavion Thomas gave the Bearcats a boost, too.

The conference schedule maker, however, did UC no favors next week. The Bearcats play on the road on a short week, meeting East Carolina on Black Friday.

The Pirates improved to 7-4 on a 53-yard, walk-off field goal by freshman Owen Daffer, whose season-best had been 39 yards.

Bearcats best be on point, as the superpowers asserted themselves over the upstarts Saturday.

In a season that has been dotted with upsets and surprises, the most talented teams are rising to the top.

No. 7 Michigan State and No. 13 Wake Forest have been good stories, but against No. 5 Ohio State and Clemson, they were outclassed.

And No. 4 Oregon, which has been trying to prove it belongs among the elite, showed that it most definitely does not yet at Utah.

In Columbus, Ohio, the day's marquee matchup was over for all intents and purposes after about a quarter. The Buckeyes were up 49-0 at halftime on the Spartans behind a near-perfect performance by C.J. Stroud, who called it a day in the third quarter with 432 yards passing and a school-record six touchdown passes.

If there is an offense in the country that might have a chance to do more than just dent No. 1 Georgia's ferocious defense, it might be the Buckeyes'.

Next up for the Buckeyes and their star-studded offense is a trip to No. 8 Michigan, which looked ready against Maryland to try to break an eight-game losing streak in The Game.

That Oregon loss in September is a distant memory for Ohio State, which is a victory away from a fifth straight Big Ten title game appearance. The Buckeyes have won the previous four.

In Death Valley, Clemson put together its best offensive performance of the season and slammed the door on the slightest glimmer of hope Wake Forest (9-2) and the Atlantic Coast Conference had to put a team in the College Football Playoff.

The Tigers (8-3) are too far gone to make the playoff for a seventh straight season, but suddenly there is hope to extend their streak of six straight ACC titles. If Wake loses next week at Boston College and North Carolina State losses to North Carolina, Clemson is back in the conference title game for a rematch against No. 20 Pitt.

Michigan State has had a remarkable turnaround in year two under coach Mel Tucker, who is reportedly weighing a massive contract extension from the school because it believes he can build a program that can truly threaten Ohio State.

Michigan State learned Saturday there is still a long way to go.

Even if Wake were to stumble next week, this has been the Demon Deacons' best season in more than a decade, clueing the rest of the country in on the nice job coach Dave Clawson has done at the smallest Power Five school in the country.

Still, Wake's experienced roster and creative offense was no match for Clemson's dudes, led by freshman running back Will Shipley.

The Tigers were the first team this season to hold the Demon Deacons under 35 points and extended their winning streak over Wake to 13. After a 2-2 start, Clemson has a path to New Year's Six bowl.

“They’ve rallied and they battled" coach Dabo Swinney told reporters. "The foundation of our program has won the day for us.”

In the Big 12, No. 12 Oklahoma has spent much of the season searching for its top form, but after bouncing back from last week's loss behind five-star freshman Caleb Williams, the Sooners will head into Bedlam at No. 9 Oklahoma State positioned for a fifth straight conference title game appearance. OU has won each of the previous four.

The Sooners have pedigree and Bedlam history on their side (six straight victories and 16 of 18). Oklahoma State enters on a tear. After shutting out Texas Tech, the Cowboys have won four straight by a combine 165-23.

In the SEC, No. 2 Alabama locked up its side of the conference against Arkansas, booking a spot in what figures to be a titanic championship game against Georgia.

If Stroud isn't the leader in what has felt like a wide-open Heisman race, its probably the Tide's Bryce Young. Alabama's star first-year starter passed for a school-record 561 yards and five touchdowns against No. 21 Arkansas.

Before the season there was a feeling of inevitability at the top of college football with four super teams (Alabama, Clemson, Ohio State and Oklahoma) dominating their conferences and Georgia trying to enter that conversation.

With Thanksgiving approaching, a season that at times seemed to be trending toward chaos is on the verge of falling into place largely as expected.

For the sixth time in the eight-year history of the College Football Playoff, the Pac-12 will not have a team in it.

No. 23 Utah ended Oregon's CFP hopes emphatically, blowing holes in all the cracks that had been exposed in Ducks since they left Ohio State. Beating the Buckeyes allowed Oregon to pose as a playoff contender, even though they often did not look the part.

No conference has been damaged more during the CFP era than the Pac-12. This season feels like the worst of all, with a load of humbling nonconference losses and recent league champions such as Stanford, Washington and Southern California in various states of disrepair.

Utah will make its third Pac-12 title game appearance in four seasons on Dec. 3 in Las Vegas. Oregon could make it a rematch if it beats Oregon State next week.

But the most important event for the Pac-12 during the first week of December will be held in the Dallas area when the College Football Playoff management committee tries to finally agree on an expansion plan. The hope is to have the 12-team format in place by 2024, and it can't come fast enough for the Pac-12.

The rapid descent of Florida and coach Dan Mullen continued with an overtime loss at Missouri. The Gators will limp into a rivalry game against Florida State at 5-6. “The Florida football program is going to be here for a long time. It’s not about one game," Mullen told reporters. “Got to make the program better.” At 2-6, Florida has its fewest SEC wins since 1986 ... The Seminoles come to Gainesville at 5-6, too, but feeling good about turning around their season after an 0-4 start ... Notre Dame reached double-digit victories for a fifth straight season, an Irish record. You need to win a national title as a coach to get a statue at Notre Dame. Brian Kelly might never do that, but he has established a standard in South Bend that seemed to be unreachable for more than a decade before he arrived ... On the way to putting up 62 points on rival USC, UCLA's Dorian Thompson-Robinson drew an unsportsmanlike conduct penalty for signing an autograph for a fan after one of the six touchdowns he accounted for ... No. 15 UTSA remained unbeaten and locked up a trip to the Conference USA title game with a wild last-second touchdown against UAB. Meep! Meep! ... After losing its sixth straight game, Texas has sole possession of ninth place in the Big 12 and owns a loss to the lone team behind it ... Two stars who probably haven't gotten enough accolades this season. Wisconsin's 17-year freshman running back Braelon Allen, whose seventh straight 100-yard rushing game was his best yet. Allen went for 228 on 22 carries and three touchdowns against Nebraska. Pitt receiver Jordan Addison had 14 catches for 202 yards and four touchdowns and a 39-yard punt return as the Panthers beat Virginia to clinch the ACC Coastal ... Auburn lost its third straight, upset by South Carolina, and will enter coach Bryan Harsin's first Iron Bowl at 6-5. In eight seasons under Gus Malzahn, who Auburn fired after last season and paid a $21 million buyout, the Tigers never lost three straight games.