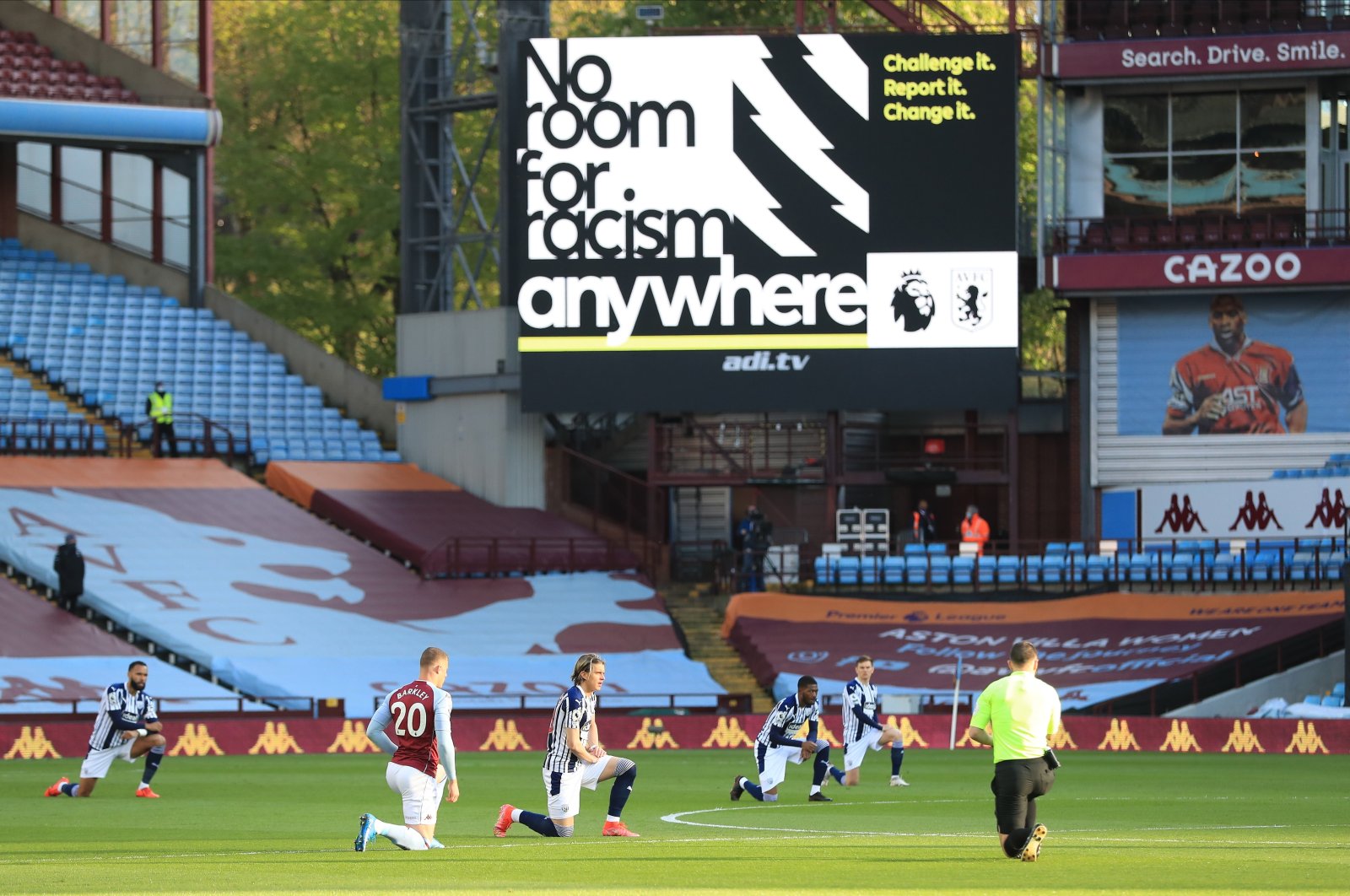 Players and officials take a knee for the 'Black Lives Matter' cause prior to the Premier League match between Aston Villa and West Bromwich Albion in Birmingham, Britain, April 25, 2021. (EPA Photo)
by Agencies
Apr 30, 2021 5:29 pm

"As President of the FA (Football Association) I join the entire football community in the social media boycott this weekend," the Duke of Cambridge tweeted Friday.

The call for blackout had spread further Thursday after FIFA and UEFA said they will join the players, clubs and organizations in a four-day protest against online abuse.

The boycott will also be joined by English cricket and rugby clubs, and the British Lawn Tennis Association, highlighting concerns that Twitter and Facebook, which also owns Instagram, aren't doing enough to combat racist abuse on their platforms.

"FIFA supports the initiative from English football to call out discriminatory and other offensive abuse on social media,” the world football's governing body said in a statement. "This has no place in football or society more generally and we strongly condemn it.

"We believe that authorities and social media companies should take real and effective steps to put an end to these abhorrent practices because it’s getting worse all the time and something needs to be done - and done quickly - to put a stop to it.

The social media silence will start on Friday afternoon until late Monday evening.

Much of the racist abuse is sent to players from anonymous accounts. Twitter and Facebook would only provide comments from unnamed spokespeople when asked for interviews to discuss the boycott.

Broadcasters are also taking part in the boycott including Comcast-owned Sky Sports and BT Sport, which televise Premier League games in Britain and would usually show goal clips on social media.

The protest means UEFA won't be posting about the Women’s Champions League semifinals on Sunday.

Seven-time Formula One champion Lewis Hamilton, the only Black driver in F1, called on his sport to join in the boycott.

"I’m really proud to hear that there are so many organizations getting involved. I’m not sure why Formula One is not a part of that," the British driver said Thursday ahead of this weekend's Portuguese Grand Prix. "I do believe that social media companies need to do more. There’s algorithms, there’s things they’re able to see, they’re able to take steps to help and create more of an anti-racist society. That’s what we’ve really got to be pushing towards.”

"We’ve had enough of these cowards who hide behind their anonymity to spew out their noxious ideologies,” Ceferin said last week in Montreux, Switzerland.

The English campaign this weekend followed British clubs Rangers, Birmingham and Swansea shutting down their social media for several days.

Former France and Arsenal forward Thierry Henry also shut down his social media accounts to protest against racism and bullying.

English soccer officials have urged the British government to enact laws making social media companies more accountable for what appears on their platforms.