Argentina to face Brazil on the road to Qatar World Cup 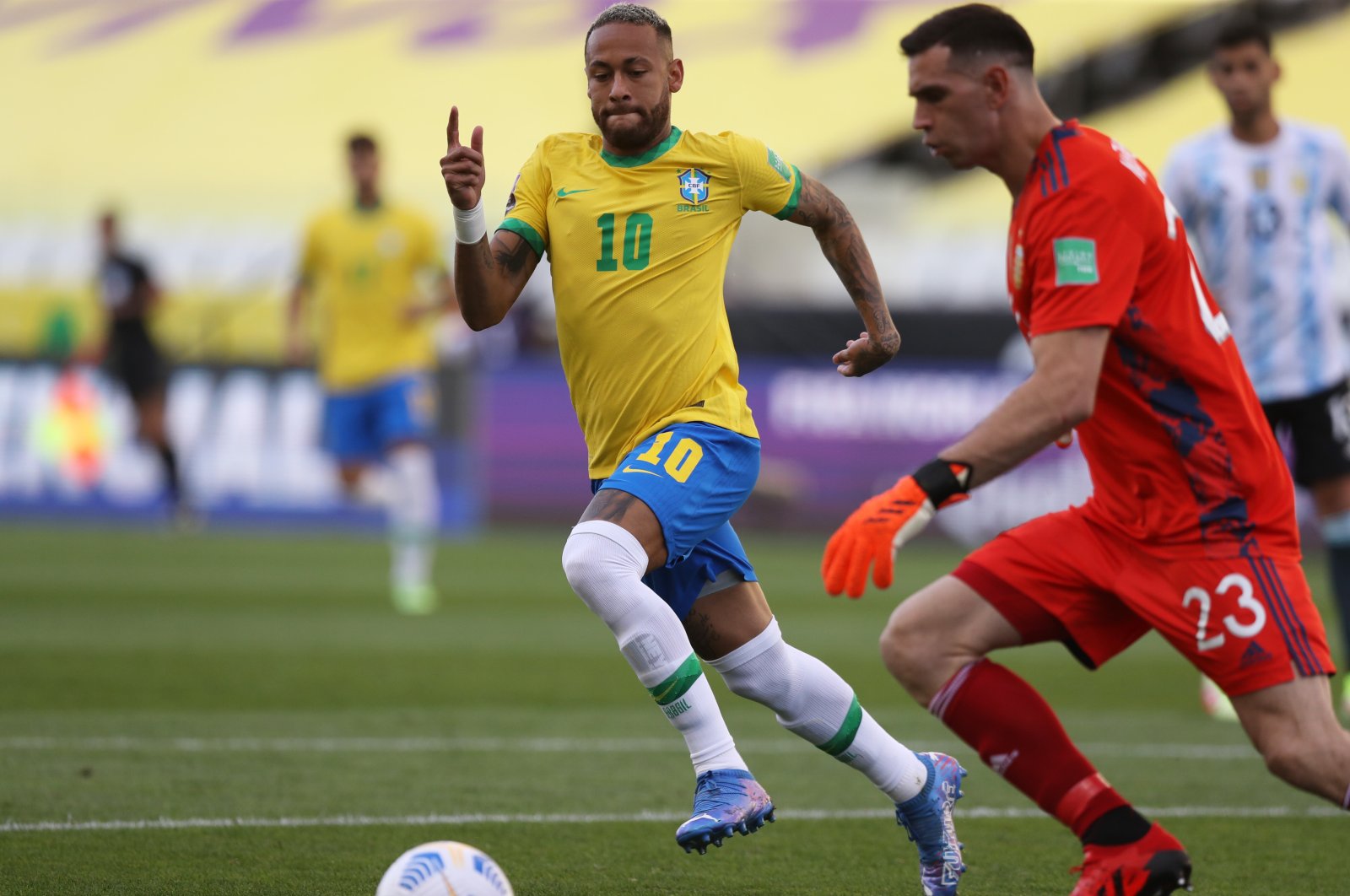 Brazil's Neymar (L) in action with Argentina's Emiliano Martinez before the match was interrupted at the World Cup qualifier in Sao Paulo, Brazil, Sept. 5, 2021. (Reuters Photo)
by Daily Sabah with AP Nov 15, 2021 9:35 am

South American football giants Argentina and Brazil brace for a superclasico for Qatar World Cup 2022 qualifiers on Tuesday. Argentina will play without Messi and against a rival that has already booked its place in next year's global tournament.

Fans of South American football are eagerly waiting for Tuesday as the two soccer giants Brazil and Argentina prepare to clash for a Qatar World Cup 2022 qualifier match.

Brazil is already the first South American team to secure a direct spot in next year's World Cup. Second-place Argentina is nearly there, too. However, this qualifying match will be a high voltage game in light of the regional superclasico, a Spanish term that describes the traditional sports rivalry between the two sides.

Copa America champion Argentina is determined to upstage Brazil and show footballer Lionel Messi has a decent chance of winning the only trophy missing in his career next year. Victory in front of the home crowd could also mean, pending other results, securing qualification for Qatar 2022. Brazil aims to complete the best South American qualifying campaign in history, though coach Tite is expected to continue experimenting with his lineup with an eye on the World Cup.

Around 25,000 fans in San Juan, in northwest Argentina, will be at the stadium to watch the teams play a full game for the first time in this edition of World Cup qualifying. The first encounter was stopped after seven minutes of play in September by Brazilian authorities enforcing protocols for the COVID-19 pandemic.

Brazil leads the qualifiers with 34 points, six ahead of Argentina. Both teams have completed 12 games, one fewer than the other eight teams in qualifying. Ecuador remains third with 20 points, while Chile, Colombia and Uruguay each have 16 points. Peru is back in contention with 14 points, two more than Paraguay and Bolivia and seven more than Venezuela. The top four teams in South America earn direct entry to the World Cup. The fifth-place team goes into an intercontinental playoff for a spot in Qatar. Also, on Tuesday, Bolivia will host Uruguay, Colombia takes on Paraguay, Venezuela faces Peru and Chile plays Ecuador.

Argentina can secure a World Cup spot if it beats Brazil and if two of three other teams – Uruguay, Chile and Colombia – fail to win. The most challenging part of Argentina's night will be beating the undefeated Seleção, a Brazilian national football team nickname.

Messi is being spared for the match against Brazil because of a knee injury that stopped him from playing some games for his club Paris Saint-Germain and most of Argentina's 1-0 win at Uruguay last Friday. The derby against Brazil is always a major contest, and thousands of fans in San Juan stood in 2-mile (3.22-kilometer) long lines to get tickets. Hotels in the region are full. Confidence is running high among fans to see a team that has not lost any of its 26 latest matches.

Brazil will also have a key player missing, their midfielder Casemiro was suspended after the 1-0 win against Colombia. Fabinho is likely to replace him. Coach Tite is set to continue making changes to his lineup, possibly with Matheus Cunha replacing Gabriel Jesus upfront. Eder Militão will also take the place of Thiago Silva. Seleção right-back Danilo said the team needs to continue developing despite already earning a direct entry to Qatar. Another target for the squad, he said, is to top the 43 points that Argentina earned to qualify for the 2002 World Cup. "This is Brazil vs. Argentina, there is every ingredient of a global derby of two teams with great players, amazing skill and a lot of history," Danilo said in a news conference. "Our objective is to go there and win three important points."

Aleksandar Mitrovic's 90th-minute header left Cristiano Ronaldo and Portugal stunned in a 2-1 win for Serbia in Lisbon, which gave Serbia an automatic qualifying spot at the World Cup in Qatar. Portugal still has a chance to qualify, but it must navigate a four-team bracket in the playoffs in March.

Croatia laid siege to Russia's goalpost on a waterlogged field, which quickly turned into a swamp, and was finally rewarded when a Russian defender scored an 81st-minute own goal, enough for a 1-0 win. Russia, too, heads to the playoffs, which start March 24, and will sort 12 teams – 10 group runner-ups and two with strong records from the Nations League – into three brackets of four teams. Each bracket has one World Cup place. The draw takes place Nov. 26 in Zurich.

Substitute Morata scored the winner for Spain after Dani Olmo's long-range shot bounced off the post to send Spain to its 12th consecutive World Cup. At the age of 40, Zlatan Ibrahimovic was bidding to reach his first World Cup since 2006 with Sweden – he didn't make the squad in 2018 – but couldn't change the game after coming off the bench in the 74th minute. That ended a campaign that seemed under control for Sweden before a shocking 2-0 loss to Georgia on Thursday. In Athens, already eliminated Greece and Kosovo finished with a 1-1 draw.

The runners-up from the 2018 World Cup, Croatia, had to brave both the 2018 host team Russia and tough weather conditions to book its place in next year's tournament.