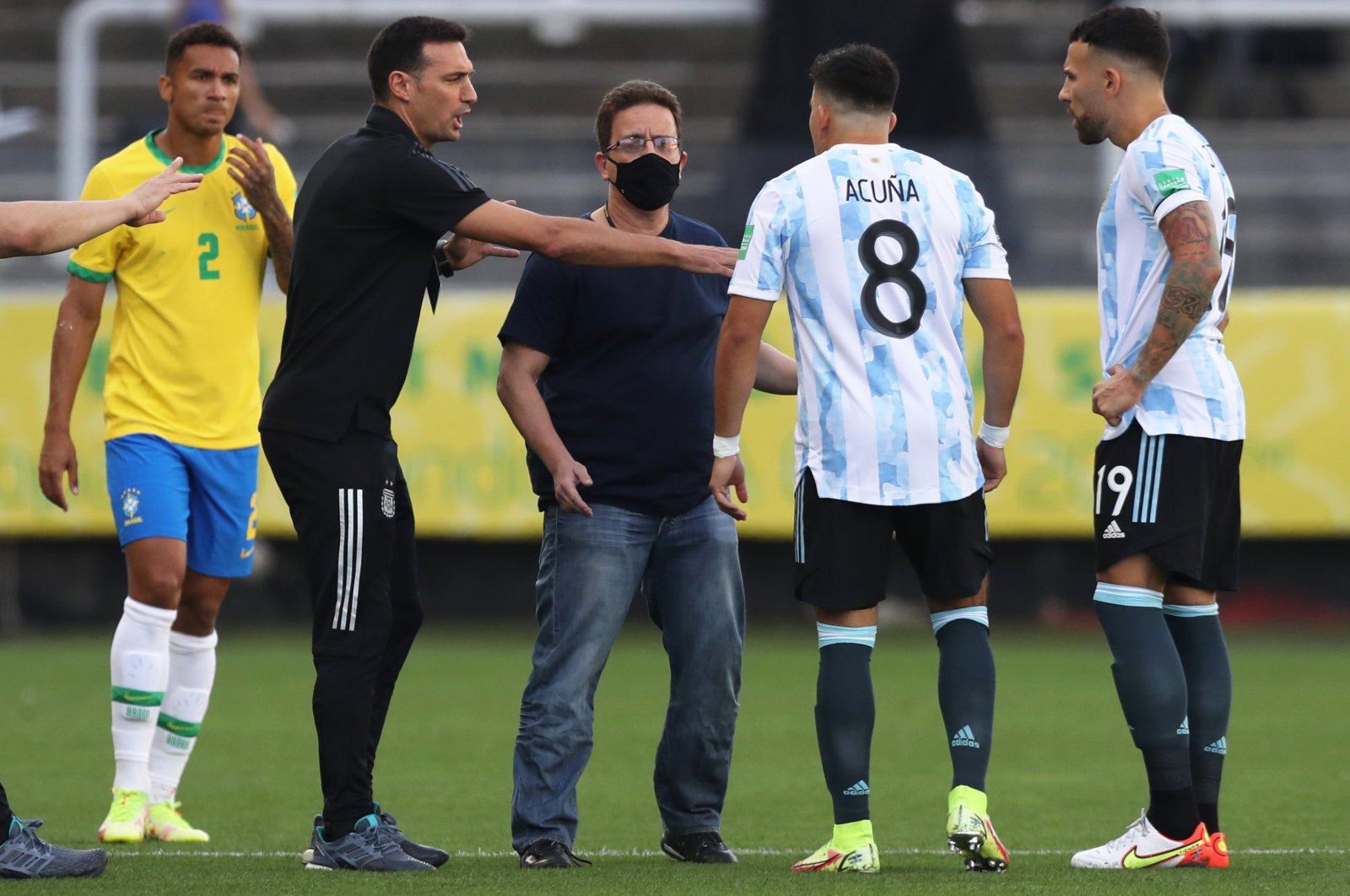 The highly anticipated World Cup 2022 Latin American qualifier between archrivals Brazil and Argentina was abandoned Sunday after a controversy over COVID-19 protocols erupted.

Amid incredible scenes at Sao Paulo's Neo Quimica Arena, the match between the two giants of South American football was halted when Brazilian health officials ran onto the pitch, triggering a melee involving team officials and players from both sides.

The sides were just seven minutes into the match, which was played in front of only 1,500 spectators because of coronavirus restrictions.

Romero, Lo Celso and Martinez were all in Argentina's starting line-up for Sunday's game – prompting the surreal intervention of ANVISA officials.

The four players were accused of failing to disclose that they had spent time in the United Kingdom in the 14 days before they arrived in Brazil, where COVID-19 has claimed more than 580,000 lives.

The controversy comes after nine Brazilians based in the Premier League failed to travel to South America following objections from their clubs.

Argentina captain Lionel Messi and his teammates trooped off the field as confusion reigned over the fate of the game.

Soon, Brazil's squad began a practice game on the pitch.

Messi later hit out at the intervention by Brazilian officials.

"We've been here for three days, why are you doing this just now?" he said on Argentina's TyC network.

Argentina coach Lionel Scaloni was similarly incensed, telling media that "at no time were we told that they could not play the game."

The Argentina team arrived back in Buenos Aires during Monday's early hours.

Argentina Football Association president Claudio Tapia said the federation had followed FIFA protocols for the game, pushing back at the claim that players had falsified entry records.

"It is not possible to speak of any lie," Tapia said.

Brazilian officials were unrepentant about the decision to halt the game, however.

"We got to this point because everything that ANVISA directed, from the first moment, was not fulfilled," ANVISA director Antonio Barra Torres said on Brazilian television.

The four players "were directed to remain isolated while awaiting deportation, but they did not comply. They went to the stadium and they entered the field, in a series of breaches," the official added.

A government order dating from June 23 prohibits the entry into Brazilian territory of any foreign person from the U.K., India, or South Africa, to prevent the spread of variants of the coronavirus.

"ANVISA considers that this situation represents a serious health risk and recommends that the local health authorities (of Sao Paulo) order the immediate quarantine of the players, who are prohibited from taking part in any activity and from remaining on Brazilian territory," the agency said in a statement earlier Sunday.

The agency also said Argentina's delegation had been warned in a meeting on Saturday that the players at the center of the controversy must be quarantined and should not play any part in Sunday's game.

South American football's governing body CONMEBOL said in a statement that the game had been "suspended" but did not say when or if the match would be replayed, or whether either team would forfeit the game.

"By decision of the match referee, the match organized by FIFA between Brazil and Argentina for the qualifiers for the World Cup is suspended," CONMEBOL said in a statement.

"The referee and the match commissioner will submit a report to the FIFA Disciplinary Committee, which will determine the steps to follow. These procedures adhere strictly to current regulations."