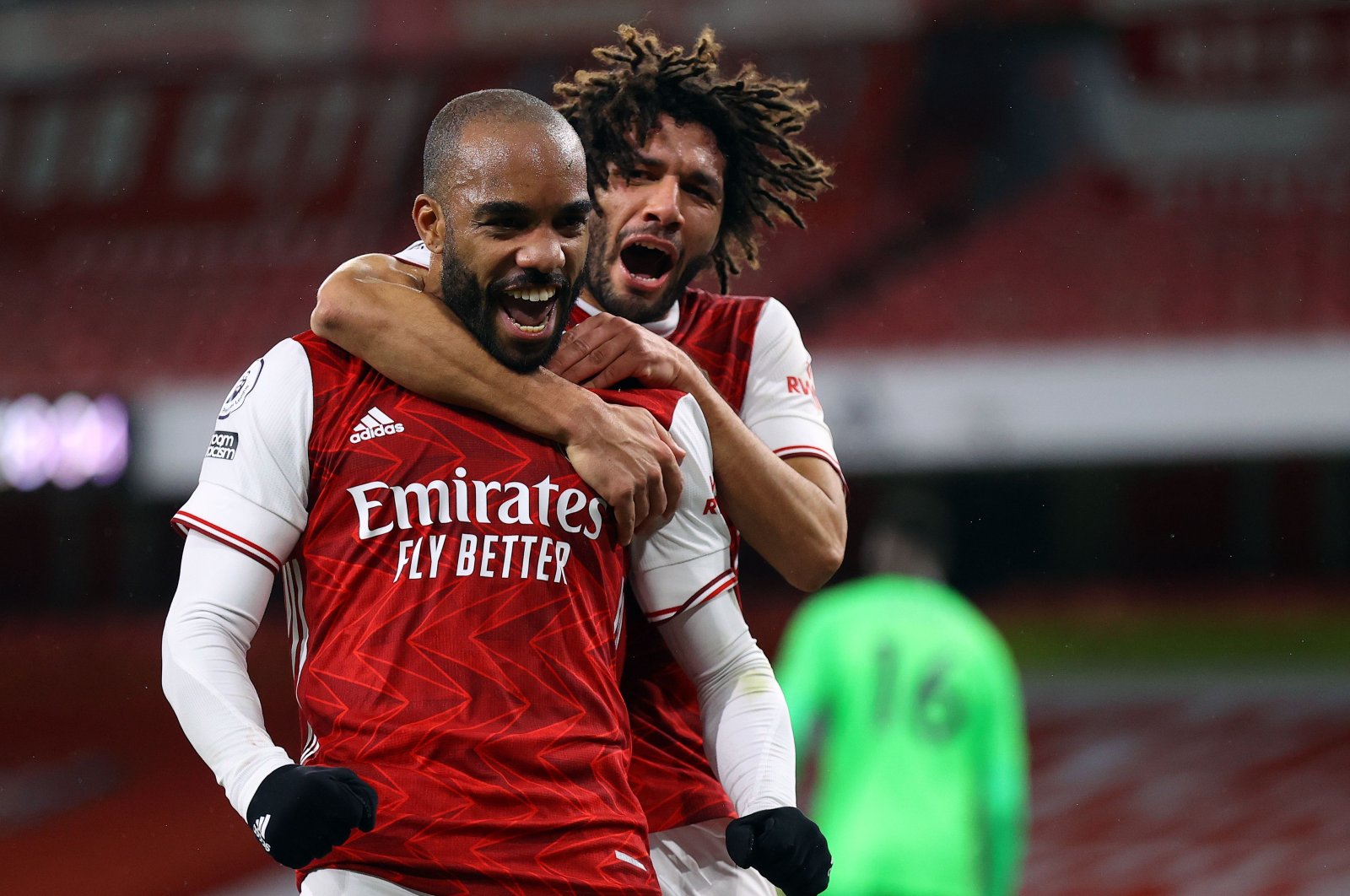 Arsenal's Alexandre Lacazette (L) and Mohamed Elneny celebrate a goal during the Premier League match against Chelsea at the Emirates Stadium in London, Britain, Dec. 26, 2020. (AFP Photo)
by Reuters Dec 27, 2020 10:00 am
RECOMMENDED

Arsenal, missing several first-choice players, took the lead in the 35th minute when Lacazette sent Chelsea goalkeeper Edouard Mendy the wrong way from the spot after Kieran Tierney was adjudged to have been clipped in the box by Reece James.

Nine minutes later, Xhaka lifted an unstoppable freekick over the wall and beyond Mendy's dive.

But Chelsea was only marginally more threatening for most of the second half and Arsenal sealed the win in the 56th minute when Saka floated what looked like a cross over Mendy and the ball hit the far post and went in.

Chelsea snatched a consolation goal with five minutes to go when Tammy Abraham converted a cross by Hudson-Odoi.

Jorginho could have set up a tense finale but his poorly taken penalty was saved by Bernd Leno.

"It’s a really important win for us. Some of the performances haven't been enough to win football matches and that is something difficult to handle over time," Arteta said.

"We needed points and today we have done it in a really convincing way," he said. "It's been some difficult weeks."

Arsenal had failed to win any of its previous seven league games – losing five of them – and the win lifted them to 14th place in the table. Chelsea is sixth after its third consecutive away defeat.

The Gunners went into the game with talk of a relegation battle swirling around the Emirates Stadium after their worst showing in the league so far in nearly 50 years.

To compound Arsenal’s problems, it was missing David Luiz and former Chelsea midfielder Willian, who felt unwell. Both were left out as a precaution despite testing negative for the coronavirus.

Brazilian Gabriel was sidelined after being in contact with someone who tested positive for COVID-19 and striker Pierre-Emerick Aubameyang was on the bench after an injury worry.

But Arsenal looked hungry for a win right from the kickoff and understudies Emile Smith Rowe and Gabriel Martinelli, back from injury, threatened Chelsea with its pace.

"Didn’t do enough first half, better second half but we had too much to do at that point,” he told reporters. “All the basics were wrong.”

Elsewhere, Leicester City came back twice to end Manchester United's away winning streak with a 2-2 draw at the King Power stadium.

A Jamie Vardy shot which deflected off United defender Axel Tuanzebe, five minutes from the end, secured a point for Brendan Rodgers' side after Bruno Fernandes appeared to have secured another victory on the road for United.

Ole Gunnar Solskjaer's side, which had won its last ten away games in the Premier League, stood third on 27 points, a point behind second-placed Leicester.

Marcus Rashford had missed a wide-open header but put United ahead in the 23rd minute with a cool finish after being slipped in by Fernandes before Harvey Barnes equalized eight minutes later with a fine shot from the edge of the box.

Rashford had a great chance to put United back in front on the hour but his powerful drive was well saved by the right hand of Kasper Schmeichel.

Two minutes later Anthony Martial had an effort disallowed for offside but the influential Fernandes restored United's lead in the 79th minute, drilling into the bottom corner after being found inside the area by substitute Edinson Cavani.

Again though, the lead was short-lived as Vardy's first time shot on the half-turn from a low cross from Ayoze Perez, went in off Tuanzebe and earned a point for the Foxes.

"Disappointed we didn't win today because we had loads of big chances and we could've finished it off but they're a dangerous side," said Solskjaer.