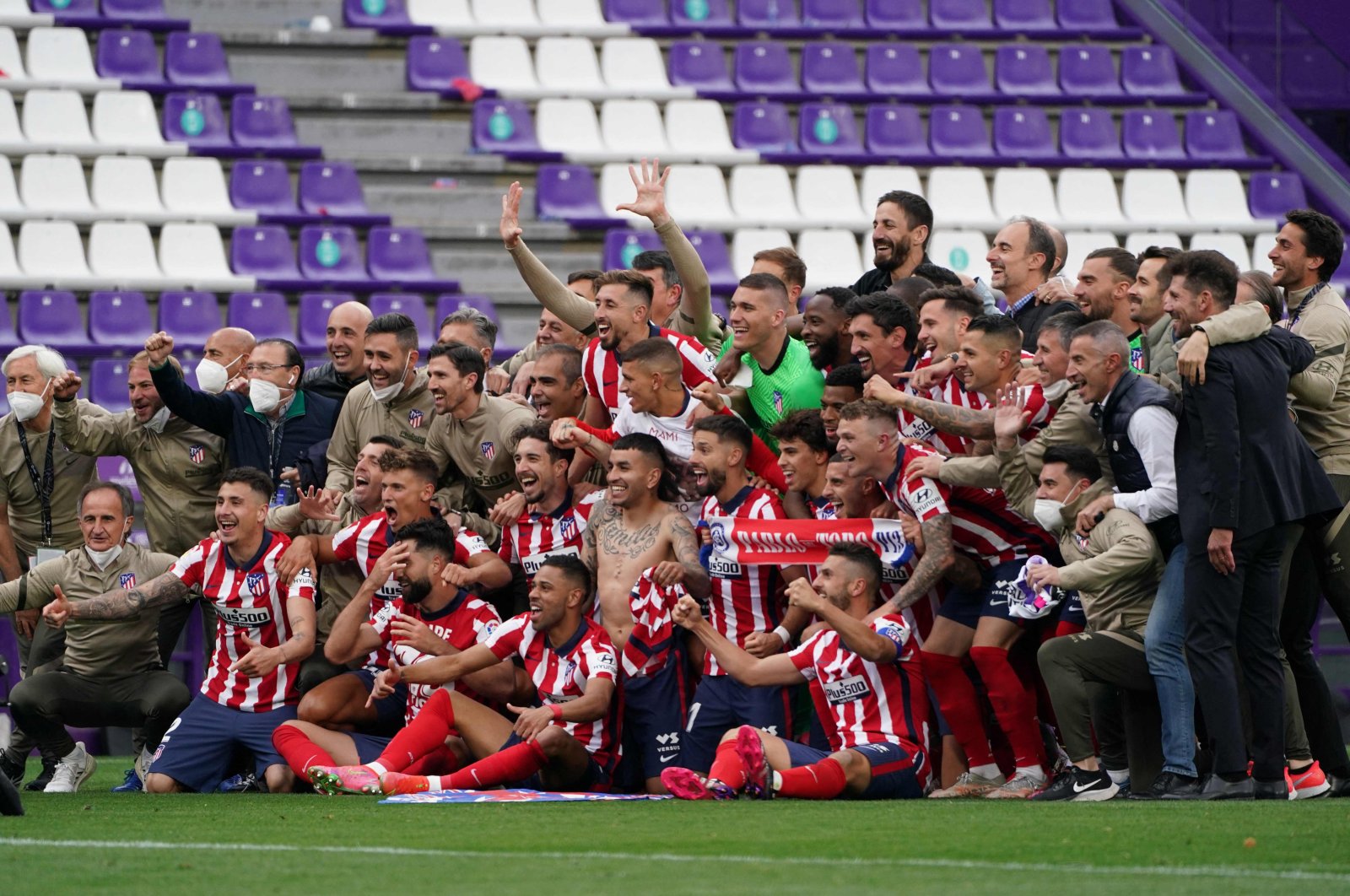 Manager Diego Simeone said Atletico's success was a triumph for strength in adversity and that, in a season when nothing was normal, his team had adapted better than the rest

After securing the La Liga title on Saturday, Atletico Madrid players ran through the stadium and out into the car park to celebrate with fans they had not seen all season due to COVID-19 restrictions.

Nearly 3,000 supporters had gathered outside Jose Zorilla Stadium, cordoned off and surrounded by police.

They watched on their phones while Atletico fell behind to 19th-placed Real Valladolid, only to come back to claim a 2-1 win and the championship thanks to Luis Suarez's 58th-minute winner.

Atletico's goalkeeper Jan Oblak was hoisted onto shoulders and a scarf was draped around the neck of the 20-year-old Joao Felix.

Central defender Jose Gimenez formed a conga and long after the crowds had dispersed, left winger Yannick Carrasco returned to check on one fan who had been hurt and had to stay lying on the concrete.

Almost an hour earlier, the final whistle had blown to leave Atletico two points ahead of Real Madrid, whose last-gasp victory over Villarreal proved irrelevant.

Some Atleti players piled onto each other and others fell to the ground with exhaustion and relief.

After being top since December and after almost throwing away a 10-point lead in February, the title was finally won.

Manager Diego Simeone said Atletico's success was a triumph for strength in adversity and that, in a season when nothing was normal, his team had adapted better than the rest.

"It speaks of the club and the team being made of something different," Simeone said.

Atletico again made it hard work against Valladolid, after a week earlier needing two goals in the last eight minutes, including another late winner from Luis Suarez, to beat Osasuna.

"Everyone tells you that suffering is part of Atletico's identity," Suarez said. "I didn't think we'd suffer that much."

And yet Atletico overcoming adversity has a wider context than these results.

This year is only the second in 17 that neither Barcelona nor Real Madrid have won the title, the other when Atletico last clinched the league in 2014.

It is the first time neither Madrid nor Barca has won either La Liga or the Champions League since 2004.

Simeone has never hidden from Atletico's historic inferiority, instead, reveling in it to cast his team as an underdog punching above its weight, without pressure and with the benefit only of hard work and belief.

Atletico spent 126 million euros ($153.48 million) on Felix in 2019 but since Simeone took over in 2011 its net spend on transfers has been around 50 million euros. Real Madrid's amounts to more than 200 million and Barcelona's close to 600 million.

Atletico's revenue is half that of Real Madrid and Barca's while its wage bill last season came in at 231 million euros, compared to Real Madrid's 385 million and Barcelona's 485 million.

When Simeone took over, Atletico was 10th. In the decade since, it has never finished outside the top three and after going 18 years without the title, the club has now won it twice in seven.

And there could be more to come. Simeone linked his team's success to unusual circumstances but celebrating does not have to be a one-off. Atletico should not have to wait another seven years for the next one.

Real Madrid and Barcelona could start next season with new coaches and a remit to overhaul squads seen as too old and too expensive.

At the same time, glamorous signings are unlikely this summer as both clubs continue to suffer the dreadful financial consequences of the pandemic.

Atletico, meanwhile, has a settled team with a coach they can trust. It has adopted a more assertive style in La Liga, even if it was unable to find it in Europe.

It has elite players like Jan Oblak, Jose Gimenez, Koke, Marcos Llorente and Suarez, who can all continue as the spine, even if it might be a risk to rely on the 34-year-old Suarez to deliver quite so dramatically again.

But with some astute additions, Atletico could next season ensure it is more than just an intervention when Barcelona and Real Madrid are below-par.

It can win the title again, on its own terms, with the fans in the stands instead of the car park.