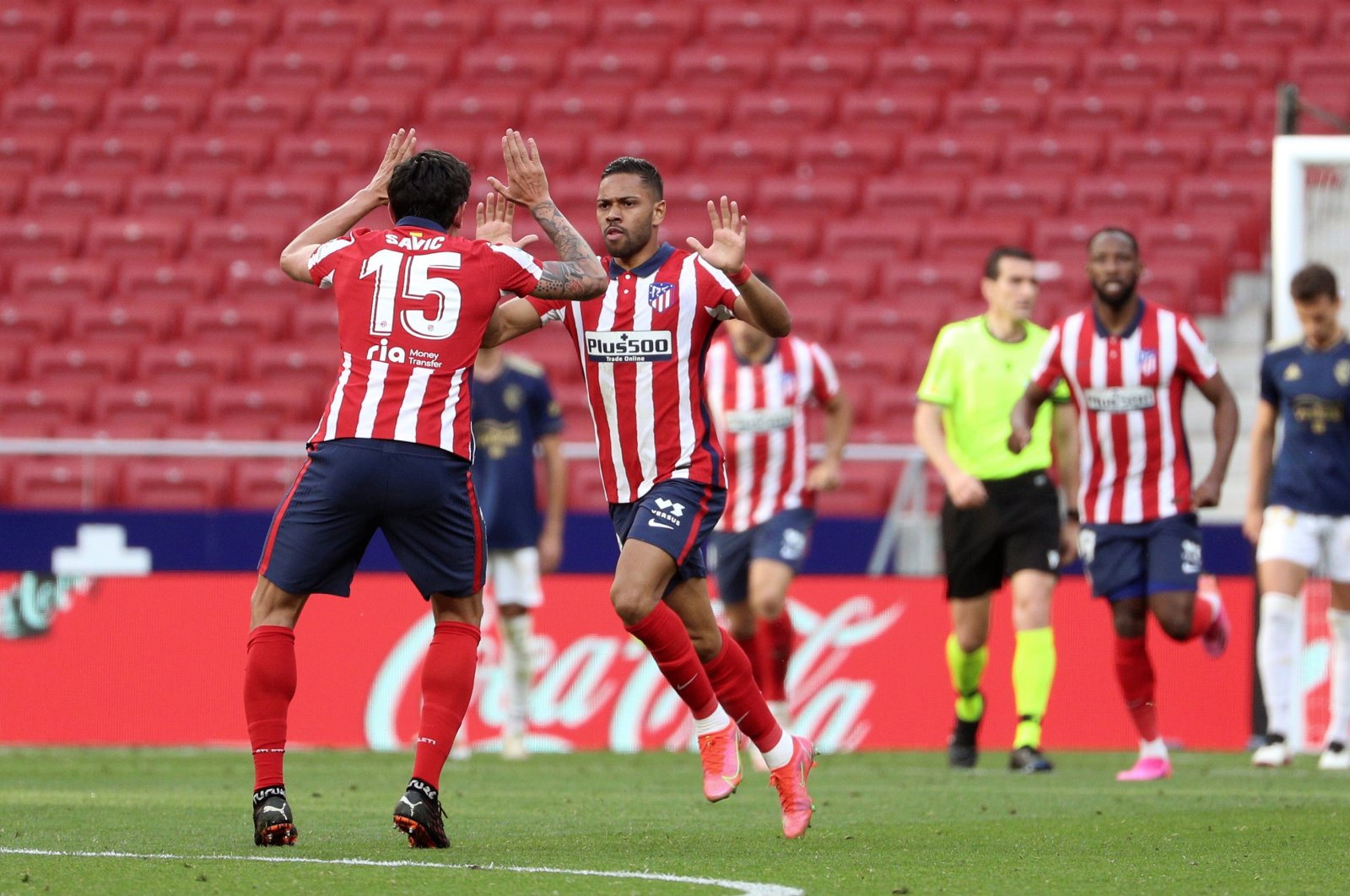 Atletico Madrid's players celebrate a goal during a La Liga match against Osasuna at the Wanda Metropolitano stadium in Madrid, Spain, 16 May 2021. (EPA Photo)
by Agencies May 21, 2021 12:15 pm
RECOMMENDED

Atletico Madrid will clinch its first La Liga title since 2014 if coach Diego Simeone’s men can beat Real Valladolid on Saturday, concluding a season where they have been the leaders for much of the campaign.

Atletico began its La Liga title chase with a sprint before ceding ground and almost losing its balance but the teams heads into the deciding weekend with the finish line in sight, trying to stay ahead of a valiant but exhausted Real Madrid.

After a nerve-shredding 2-1 win over Osasuna last Sunday, when Real was top of the table for 19 minutes, Atletico faces Real Valladolid, knowing a victory will mean bringing the much-coveted trophy back home.

Atletico's game at Valladolid will be anything but easy. Valladolid might have been relegated already had results gone against it last weekend but instead it is still fighting to be the one team out of three that survives.

Huesca and Elche are the others scrapping to finish 17th, with both of them two points ahead of Valladolid, the trio sandwiched between already-relegated Eibar and Getafe, who are safe.

It means only a win will give Valladolid hope, a scenario that could play into Atletico's hands if it encourages its opponent to attack, opening the spaces that were denied by the defensive approach of Osasuna, which nearly spoiled Atletico's chances last weekend.

Villarreal may seem like tougher opponents on paper for Real but it is set to rest many players in preparation for the Europa League final with Manchester United.

But Villarreal could do even better and qualify for the Champions League if it defeats Manchester United in the Europa League final, four days after their game at Valdebebas.

"We will have an eye on the Manchester United game," Villarreal coach Unai Emery was quoted as saying by Agence France-Presse (AFP).

A draw for Atletico could mean the top two are tied on points but that would see the trophy returned to Real Madrid, which has a better head-to-head record than Atletico.

In some ways, Atletico might benefit from the situation being clear. It will almost certainly have win to claim the title and can look for victory from the start.

Atletico knows the feeling of having a trophy swiped from its hands by Real all too well, after losing the 2014 Champions League final following a 93rd-minute Sergio Ramos equalizer and losing the 2016 final to its more illustrious neighbor on penalties.

History has looked like repeating itself on numerous occasions this season.

Powered by the goalscoring form of Luis Suarez, Atletico won 16 of its first 19 matches to take a 10 point lead over Real at the end of January with a game in hand.

But the team began to wobble in February, when it conceded a last-minute equalizer to draw 2-2 at home to Celta Vigo before drawing and then losing to Levante.

Atletico was on course for a significant win over Real in the derby before an 88th-minute Karim Benzema equalizer snatched a 1-1 draw.

Defeats by Sevilla and Athletic Bilbao in April allowed Barcelona and Real to trim Atletico's advantage to two points, while Sevilla briefly turned the contest into a four-way race.

Real and Barca then both squandered chances to go top and Atletico, with the help of two late penalty misses from opponents plus Suarez's late winner against Osasuna, have weathered the storm.

Real also deserve huge credit for taking the race to the wire despite suffering more than 60 injuries throughout the season.

"It has been a very long season, it's been very tough, but we were lucky enough to make an excellent start," Atletico president Enrique Cerezo told radio station Cadena Ser, according to Reuters.

"We then had a slump but we're in form again and hopefully we'll have some more luck and win at Valladolid."

Win or lose, it could be Zidane's final game in charge and there are serious doubts around the future of Ronald Koeman as well, ahead of Barcelona's last match against Eibar.

Barca's disappointing end to the season means it could even surrender third place if Koeman’s men lose while Sevilla will hope for the chance to overcome a two-point gap when it faces Alaves on Sunday.