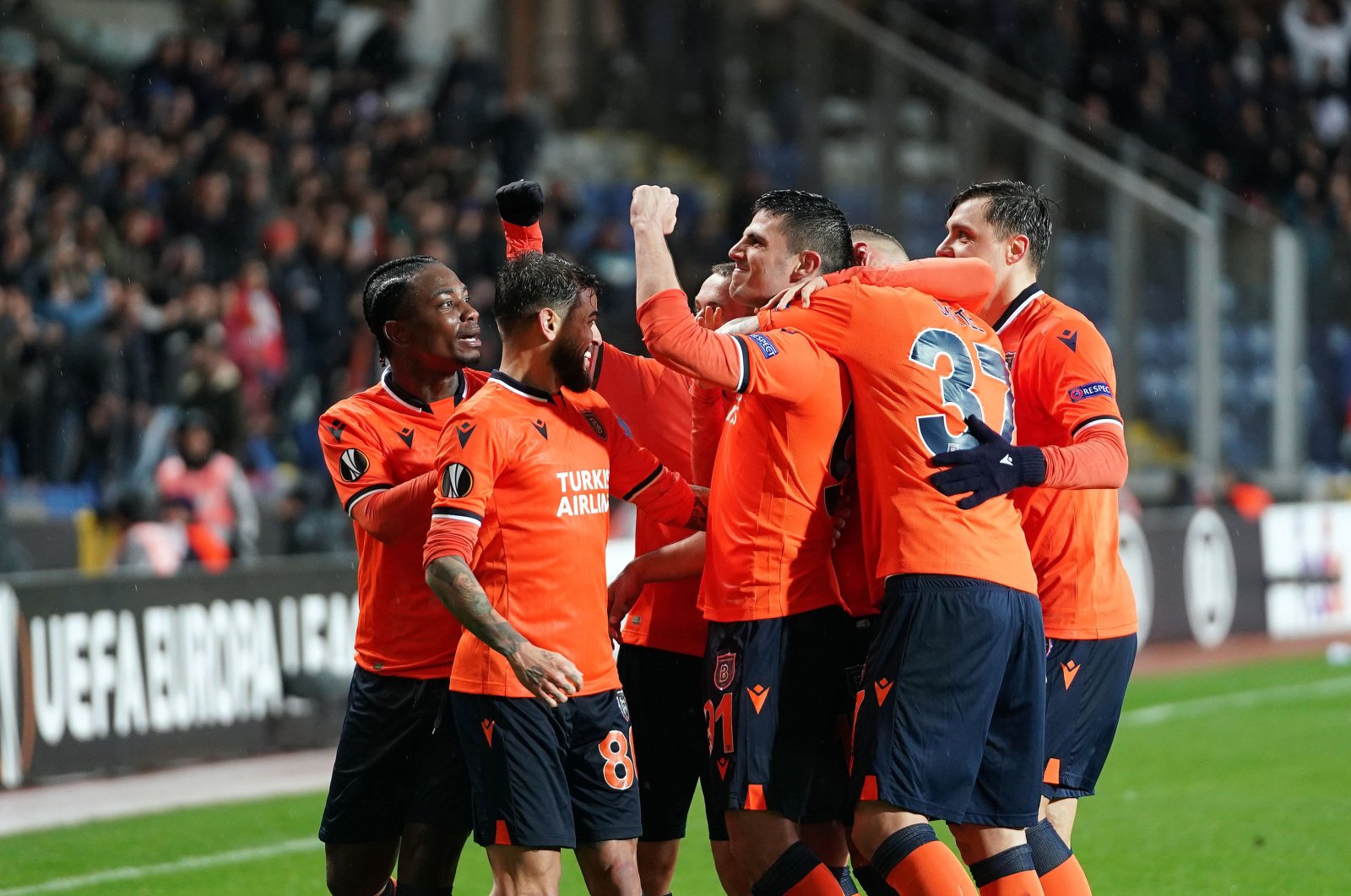 Başakşehir players celebrate advancing to the next round in UEFA Europea League after knocking out Sporting CP, Feb. 27, 2020. (İHA Photo)
by DAILY SABAH Mar 11, 2020 2:25 pm

Istanbul Başakşehir looks forward to playing its first-ever Europa League round of 16 match against Danish side Copenhagen on Thursday.

The Istanbul club enters the round of 16 on the back of a four-match winning streak across all competitions, including a remarkable 4-1 home win over Portugual's Sporting CP in Europa League’s previous round.

Thanks to having clocked up four consecutive wins in the Süper Lig, Başakşehir established itself with a slight lead in a tight four-horse race for the Turkish championship. The team is also fortunate enough to have no players on the injury bench, with the entire squad available for the match in the Danish capital.

Meanwhile, Copenhagen played three games since knocking out Scottish champion Celtic, winning only once. In the last to matches, Copenhagen was eliminated from the Danish cup and has slipped farther behind leader FC Midtjylland in the league – the gap between them now slimmed to 12 points. The Danish club also failed to score a single goal in both matches. Left-back Nicolai Boilesen and forward Jonas Wind will not help Copenhagen against Başakşehir due to injuries.

The return leg will be played at empty Parken Stadium next Thursday – fans having been barred from the game in line with measures aimed at stemming the novel coronavirus outbreak.

Meanwhile, Manchester United's Europa League final 16 sees the Red Devils first face LASK Linz in Austria in another of five matches in the competition set to be played behind closed stadium doors. United confirmed Tuesday that the decision had been made “following guidance from the Austrian government,” with the Alpine nation having recorded 182 cases of COVID-19 as of Tuesday.

The news will be a disappointment to supporters of the Austrian club hoping to see their team spring a surprise against Ole Gunnar Solskjaer's well-seasoned side.

United's 2-0 derby win over Manchester City on Sunday saw the former extend their current unbeaten run to 10 games, clocking up eight clean sheets. United is now hoping to seize the initiative in this tie before a weekend trip to Tottenham Hotspur.

Coached by the French former Bayern Munich and Crystal Palace defender Valerien Ismael, LASK is six points ahead of Salzburg at the top of the Austrian Bundesliga as it chases a first league title since 1965. LASK lost to Club Brugge in their Champions League qualifier this season. The Belgians then lost to Solskjaer's side in the last round of the Europa League.

UEFA confirmed on Monday that Wolverhampton Wanderers' first leg against Olympiakos in Greece would also be played to the sound of silence, preceding the announcement that Olympiakos owner Vangelis Marinakis – also owner of English club Nottingham Forest – had tested positive for coronavirus. He said he was taking "all necessary measures" and “feeling well.”

“We share the disappointment of all of our supporters who will be affected by this decision,” Wolves said.

Olympiakos currently tops the Greek league and will hope to claim a second Premier League scalp after eliminating Arsenal in the previous round. The side also held Tottenham at home in the Champions League group stage this season.

In addition, German club Wolfsburg has confirmed its clash with Ukraine's Shakhtar Donetsk will also be held amid empty stands. However, fellow Bundesliga side Eintracht Frankfurt is set to play FC Basel in front of a crowd while uncertainty surrounds the return leg in Switzerland next week. Basel has said the game will not go ahead in the country, where all football in the top two domestic leagues has already been postponed for the rest of the month. Fans are also expected to fill Ibrox, where Rangers entertain Bayer Leverkusen hoping to pull off a shock result against opponents on a nine-game unbeaten run and sitting fourth in the Bundesliga.

Steven Gerrard has come under pressure with his team falling 13 points behind leaders Celtic in the Scottish Premiership and also being knocked out of the Scottish Cup by Hearts. However, its European form has provided a tonic and now it is preparing for its 17th match in the competition this season. Gerrard, who called it "one of the toughest ties we could have got," is without veteran striker Jermain Defoe due to a calf injury.

Leverkusen announced Tuesday that the return leg next week "was set to be played behind closed doors" after health officials in the German state of North-Rhine Westphalia called for events set to draw crowds of 1,000 people to be called off.

At the same time, Getafe ruled out traveling to Milan to face Inter due to concerns about the coronavirus outbreak, even if it meant losing the tie, the Spanish club's president said. The region of Lombardy, where Milan is located, is at the epicenter of Europe's worse coronavirus outbreak, which has prompted the Italian government to impose a nationwide lockdown.

The match at San Siro is due to be played with no fans in attendance. "We have looked for an alternative to playing in Milan," club president Angel Torres told Onda Cero radio. "If we have to lose the tie, then we lose it," Torres added. "We don't want to run any sort of risk. We are really excited about this match, but if we have to lose it, then so be it."