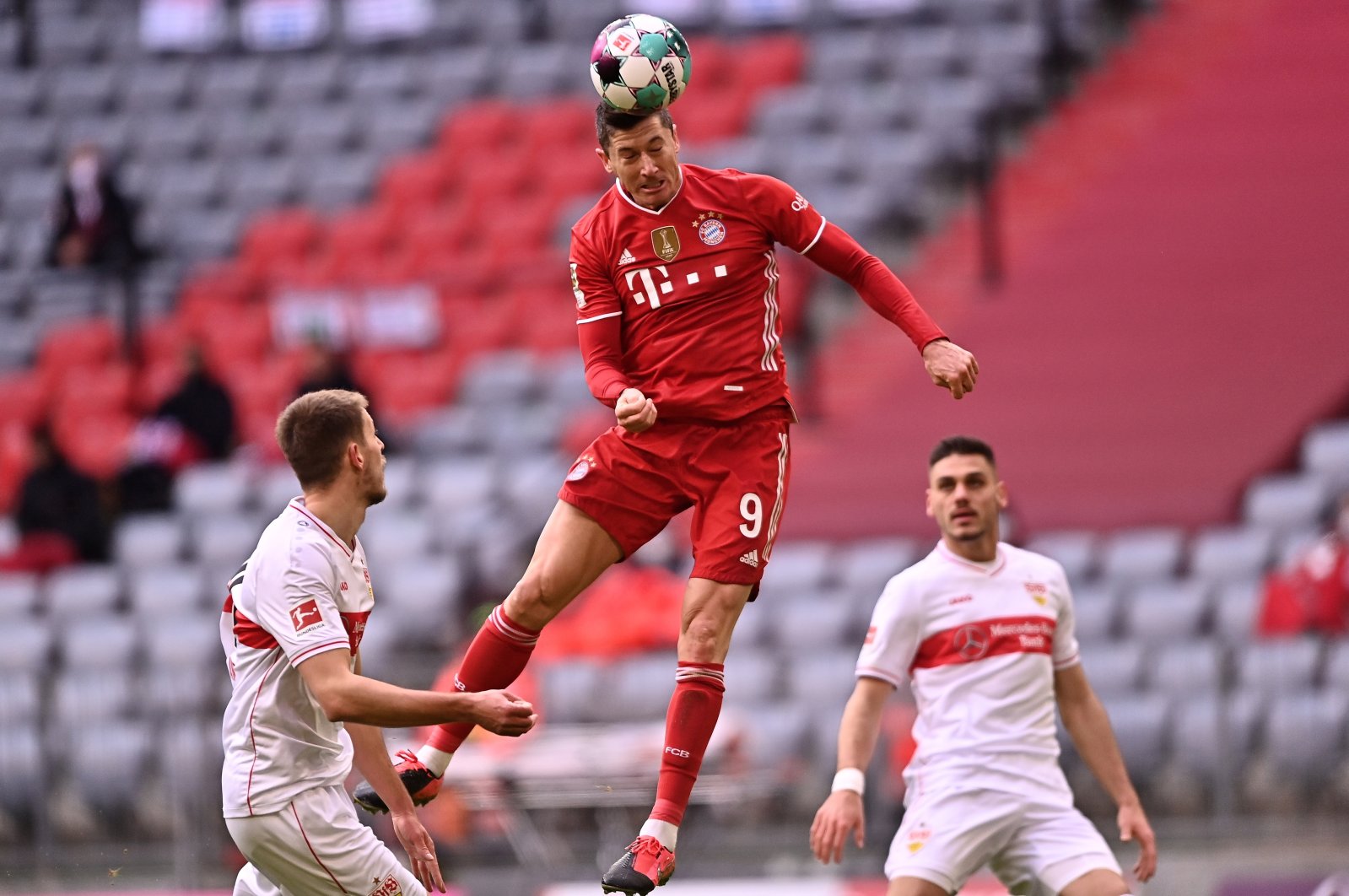 Record-chasing Robert Lewandowski scored a first-half hat trick on Saturday as 10-man Bayern Munich kept its four-point lead at the top of the Bundesliga with a 4-0 win over Stuttgart.

Bayern only started playing well after Canadian youngster Alphonso Davies was sent off for a bad tackle on Stuttgart’s Wataru Endo in the 12th minute. The defending champions’ response kept second-place Leipzig at bay before the teams meet on April 4.

"We want to settle it as soon as possible,” Bayern coach Hansi Flick said of his team's bid for a record-extending ninth consecutive title. "That's why we're happy to get the three points in these conditions, with a player less for most of the game.”

"I’m thinking from game to game, and not of how many goals I must score to break this record," said Lewandowski, who eclipsed Klaus Fischer’s haul from between 1968-88 to move second in the all-time Bundesliga scorers list.

"I’m happy with how the team played in the first half. The red card woke us up,” Lewandowski said.

Davies was initially shown a yellow card for landing with his studs on Endo’s ankle, but a VAR check upgraded it to a red.

The sending-off only seemed to rouse his teammates. Serge Gnabry crossed for Lewandowski to open his account in the 18th minute, four minutes before Thomas Muller and Leroy Sane played their way through the Stuttgart defense for Gnabry to get Bayern’s second goal.

Muller set up Lewandowski’s second a minute later, and the Poland star completed his hat trick in the 39th after being set up by Sane.

Erling Haaland scored his second goal late to salvage a 2-2 draw for Borussia Dortmund at Cologne, but the visitors dropped four points behind fourth-place Eintracht Frankfurt, which emerged from a bruising game with a 5-2 win over Union Berlin.

Both Haaland and Frankfurt forward Andre Silva took their Bundesliga goal tallies this season to 21.

Union had 25 efforts at goal, compared to the home side’s nine.

"It hurts,” said Robert Andrich, whose own goal from 20 meters (yards) was the first of three goals in six minutes from Frankfurt in the first half. Max Kruse scored twice for Union.

Meanwhile, Borussia Monchengladbach beat last-place Schalke 3-0 away to end its seven-game run of defeats across all competitions. The streak started when the club announced coach Marco Rose is taking over at Dortmund next season.

Veteran striker Klaas Jan Huntelaar came on as a substitute for just his second appearance for Schalke since his winter return, but the team was already three goals down. Schalke is 12 points from safety and preparing for the second division.