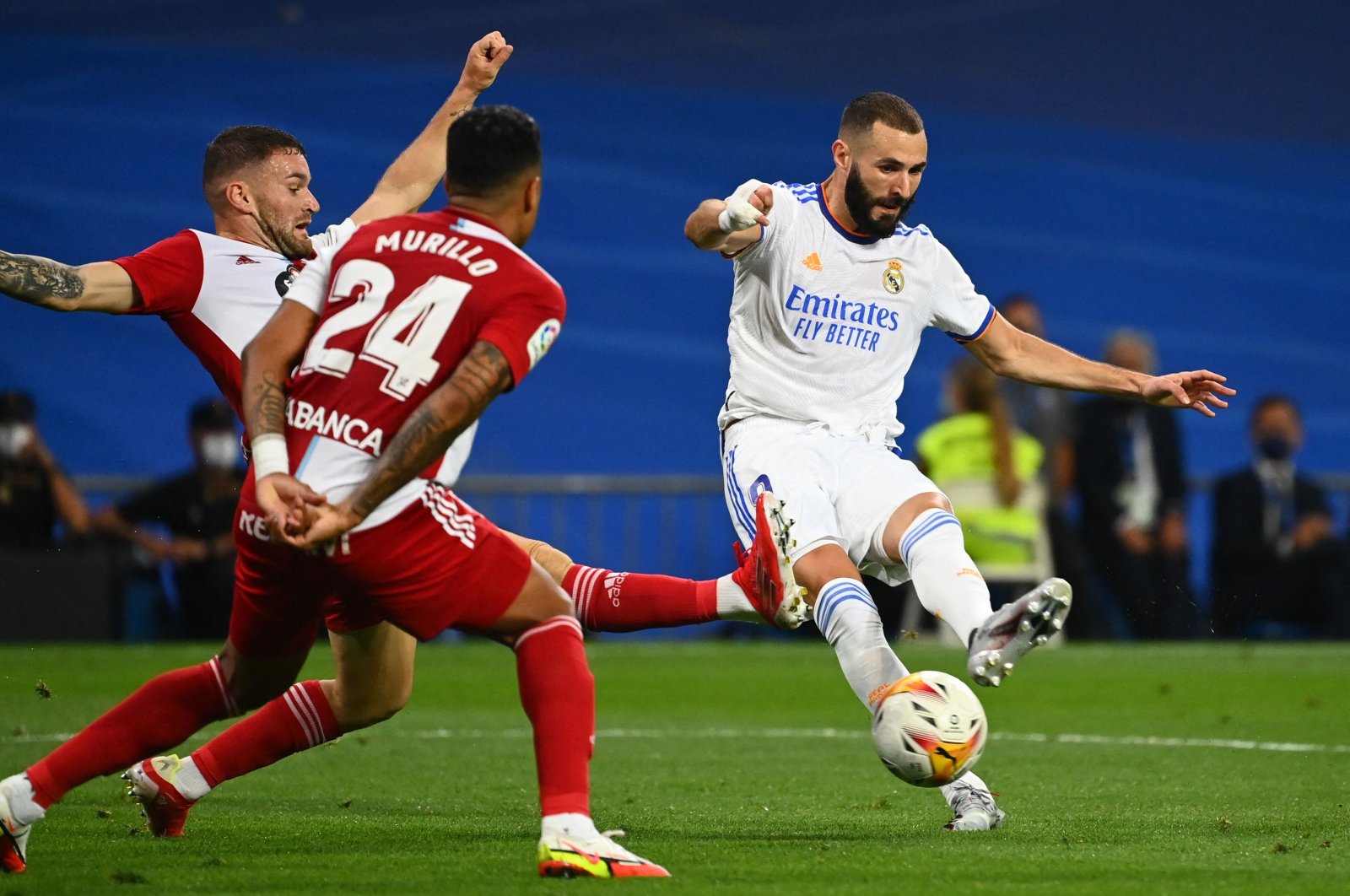 Real Madrid's French forward Karim Benzema scored a hat trick to give the Spanish giant a spectacular homecoming at the Santiago Bernabeu, after 560 days away, in a thrilling 5-2 comeback win over Celta Vigo on Sunday.

Benzema twice had to pull Madrid level after Santi Mina and Franco Cervi each put Celta ahead, goals that were greeted with whistles inside the Bernabeu where 19,874 fans attended for the first time in a year and a half.

But Benzema kept his team in it and Madrid motored in the second half, Vinicius Junior finishing after racing onto the France forward's through-ball before Eduardo Camavinga marked his debut by tapping into an open net.

Benzema completed his hat trick by converting a penalty in the 87th minute, to make it five goals and two assists from his opening four games this season.

"What wasn't so clear was the defensive organization, which has to improve."

Antoine Griezmann's return was less impressive, his first game for Atletico Madrid in two years and four months coming against Espanyol, who sank to a 2-1 defeat after a 99th-minute winner from Thomas Lemar. Griezmann had gone off in the 58th minute with his team trailing.

Griezmann played for Barcelona in Real Madrid's last match at the Bernabeu on March 1, 2020, a 2-0 home win that also featured Lionel Messi, Sergio Ramos and Raphael Varane, with Zinedine Zidane and Quique Setien in the dugouts.

If the drain of talent since has been a disappointment for La Liga, it might at least briefly offer Benzema a spell in the limelight. The 34-year-old is surely Madrid's best chance of winning back the title this term.

There was certainly a warm glow inside the Bernabeu at the end, a sense of relief after so long playing at the Alfredo di Stefano Stadium, a move prompted by the pandemic's ban on fans and aimed at accelerating the 575 million-euro ($677.84 million) renovation work at their 81,000-capacity home.

The project is not expected to be completed until toward the end of next year but with limited numbers of supporters allowed back by the Spanish government, the club has opened the doors again.

Santi Mina was the last opposition player to score at the Bernabeu before it closed and the first to score after it reopened, taking advantage of a sloppy Miguel Gutierrez pass early on to put Celta in front.

Benzema leveled after Fede Valverde cushioned back to him in the box but Celta came again, Cervi flicking in after the ball cannoned back kindly off the post to expose Madrid's defensive failings once more.

But Benzema guided in an expert header just after half-time and Madrid never looked back, Vinicius and then Benzema's penalty wrapping up a convincing win, either side of Camavinga marking his debut with a goal.

The 18-year-old, who joined for 40 million euros from Rennes, delighted the crowd with some quick feet moments after coming on, before tapping into an open net after a weaving run from Luka Modric.

Atletico's comeback against Espanyol was less comfortable as they needed 10 minutes of added time and a 99th-minute winner from Lemar to snatch victory.

Griezmann was replaced by Joao Felix in the 58th minute, an underwhelming return for the Frenchman symptomatic of a lethargic Atletico, who only sprung into life late on.

"He was good in the first half, when we weren't," coach Diego Simeone said.

"We didn't create enough speed and Espanyol played much better, they were more dynamic, more intense, stronger, they hurt us."

Yannick Carrasco was the catalyst, firing in with 11 minutes left of normal time before Lemar surged through midfield and finished.

Atletico maintains its unbeaten start while Espanyol is still searching for their first victory since returning to La Liga themselves, following a year spent in Segunda.

Valencia sits level with Atletico and Real Madrid on 10 points after they continued their strong start under new coach Jose Bordalas with a 4-1 win away at Osasuna.