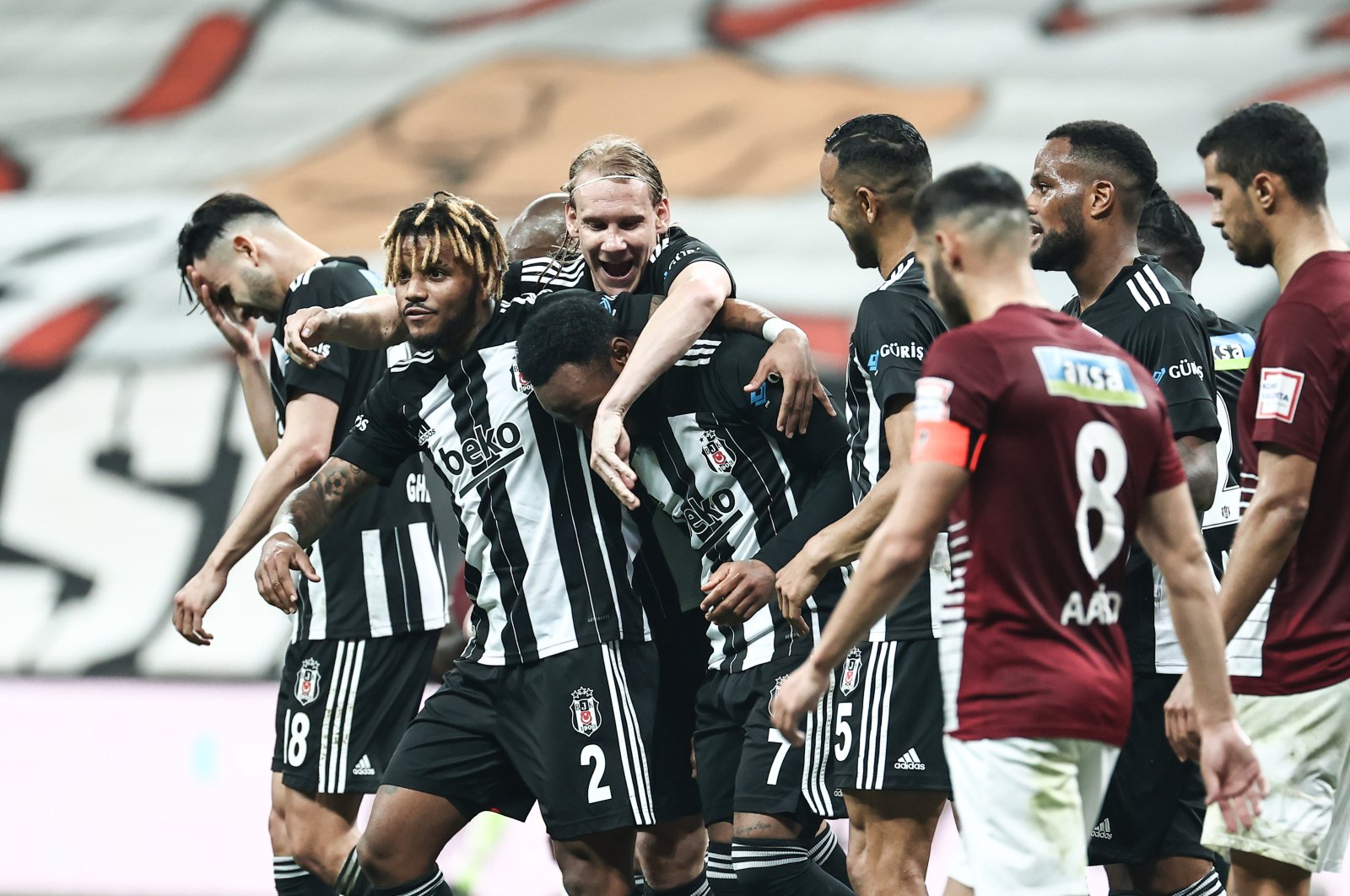 Beşiktaş forward Georges Kevin N'Koudou (2nd L) celebrates with his teammates after a goal in the Turkish Süper Lig Match against Atakaş Hatayspor at Vodafone Park in Istanbul, Turkey, May 1, 2021. (AA Photo)
by Daily Sabah with AA May 01, 2021 10:36 pm
RECOMMENDED

Inflicting a bitter 7-0 defeat to Hatayspor, one of the Turkish Süper Lig's strongest teams Istanbul giant Beşiktaş, inched closer to the championship as Canadian forward Cyle Larin scored four to give his team an 8-point cushion with three games remaining.

With the victory against sixth-placed Hatayspor, Beşiktaş has 81 points with a game in hand while extending its lead over runner-up Fenerbahçe and third-placed Galatasaray, which trail behind by 8 and 9 points respectively.

The Black Eagles dominated their opponents in the first half that saw five goals, which marked a record in club history. Nigerian winger Babajide David Akintola's own goal in the 2nd minute gave Beşiktaş the lead at Vodafone Park, which soon increased to three as Larin scored two in the 11th and 14th.

French winger Georges-Kevin N'koudou increased the lead to four in the 38th minute. Having replaced N'koudou only a minute earlier, youngster left-back Rıdvan Yılmaz brought the tally to five in the 44th. This was the first professional goal for the 19-year-old, who played in 17 matches this season.

Larin scored two more in the 55th and 65th, setting the score and becoming his club's top scorer this season, four ahead of Cameroonian forward Vincent Aboubakar's 15.

Beşiktaş will be crowned Turkish Süper Lig champions if they collect 4 points in the next two games.

For manager Sergen Yalçın, the score was "fantastic" and beyond their expectations.

Tackled Fenerbahçe to ask for rematch

Drawing with fifth-placed Aytemiz Alanyaspor and shedding two vital points on Thursday, Fenerbahçe announced Saturday that the club will apply to the Turkish Football Federation (TFF) for violation of the law of the game.

In the statement, Fenerbahçe said that a penalty, which was given to them in the 27th minute, was disallowed after the VAR (Video Assistant Referee) review and this decision violated the law of the game.

The referee, Yasar Kemal Uğurlu, decided on a penalty kick after Enner Valencia was brought down in the penalty area, but VAR overturned the decision due to offside.

"The cancellation of the penalty decision is a clear violation of the relevant articles of the IFAB, an organization which set the rules of football around the world," Fenerbahçe said on Friday.

The game should be replayed, Fenerbahçe added. The club will take on relegation zone's Büyükşehir Belediye Erzurumspor on Monday.