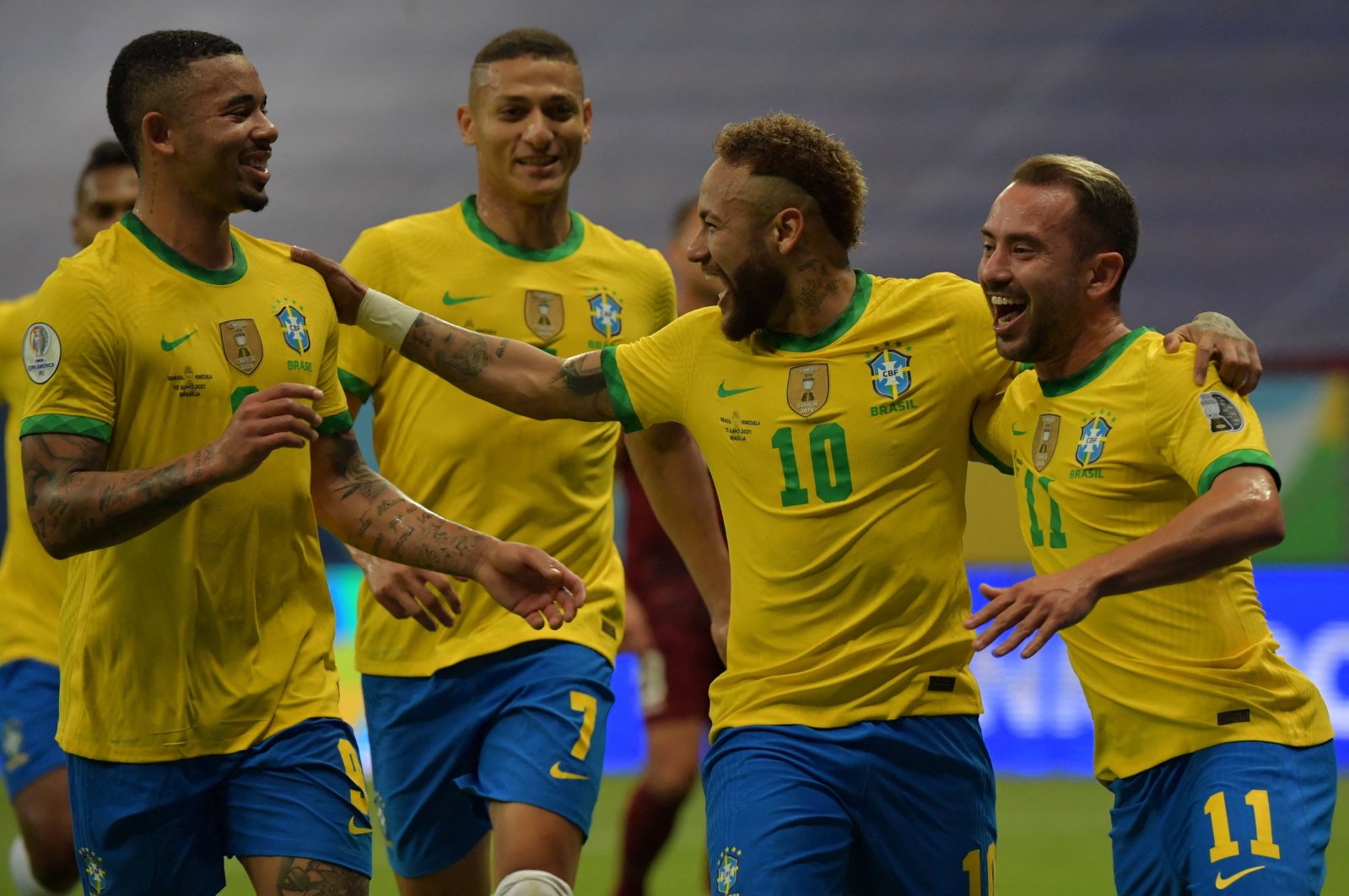 Holders Brazil launched its Copa America campaign in style with a comfortable 3-0 win over COVID-depleted Venezuela side Sunday.

Marquinhos, Neymar and Gabriel Barbosa scored in the opener at Mane Garrincha stadium in Brasilia, less than a day after several Venezuelan players tested positive for the coronavirus.

South American football governing body, CONMEBOL, chose Brazil as host less than two weeks ago, despite its alarming COVID-19 figures, after Argentina and Colombia were dropped as co-hosts.

Despite his opposition to staging the tournament in his home country, Brazil captain Casemiro said the defending champions intended to retain their trophy.

"It could be a friendly, Copa America, World Cup qualifiers, we play it to win,” he said. "Venezuela had the idea of defending, they wanted a draw. But we were focused and we were aggressive in the last third of the pitch.”

Venezuela summoned 15 new players at short notice after eight squad members tested positive for COVID-19 on Saturday, and the disruption showed on the field. The Selecao wasted opportunities but faced little resistance from Venezuela.

Brazil opened the scoring in the 23rd minute after a corner kick ended with Marquinhos striking from close range.

Brazil coach Tite – who also opposed holding the tournament – took Lucas Paqueta off at halftime, but kept Roberto Firmino on the bench. Instead, Everton Ribeiro went on and provided more dynamism on the right flank.

Ribeiro found Danilo on the right edge of the box, and the Brazilian was pushed to the ground. Neymar calmly scored from the spot in the 63rd to make it 2-0. He looked to the right of Venezuelan goalkeeper Joel Graterol, but took his shot to the left.

Neymar dribbled past Graterol and crossed for Barbosa to chest the ball into the empty net in the 89th. A flop at Inter Milan and Benfica, Barbosa is a hero at Brazilian club Flamengo, which wants him on the national team more often.

Tite said he's experimenting with combinations, thinking ahead to the World Cup in Qatar next year.

"I am seeking tactical alternatives, positional alternatives. But operating on different functions,” the Brazil coach said. "The idea is not to lose our character, otherwise you break the links, the connections, you remove confidence from the athletes.”

Venezuela coach Jose Peseiro said he was impressed by his players overcoming so many difficulties.

"We could have done more, but I am proud of these boys. Some had their debuts for the national team. It was an important day, we wanted to dignify Copa America and the national team,” Peseiro said. "It is obvious that it (the COVID-19 outbreak) had an impact, but that doesn't stop me from being happy for their will, their effort.”

Brazil and Venezuela are in Group B with Colombia, Ecuador and Peru. Brazil and Colombia lead with three points each, but the defending champion is ahead by goal difference after Colombia’s 1-0 win against Ecuador.

The four best teams in each group advance to the knockout stage.

Brazil's second match will be against Peru on Thursday at the Nilton Santos stadium in Rio de Janeiro. Venezuela will face Colombia on the same day at the Olimpico stadium in Goiania.

The final of the South American championship will be on July 10 at the historic Maracanã stadium in Rio, which also hosted the final two years ago when Brazil beat Peru 3-1 to win its ninth title.