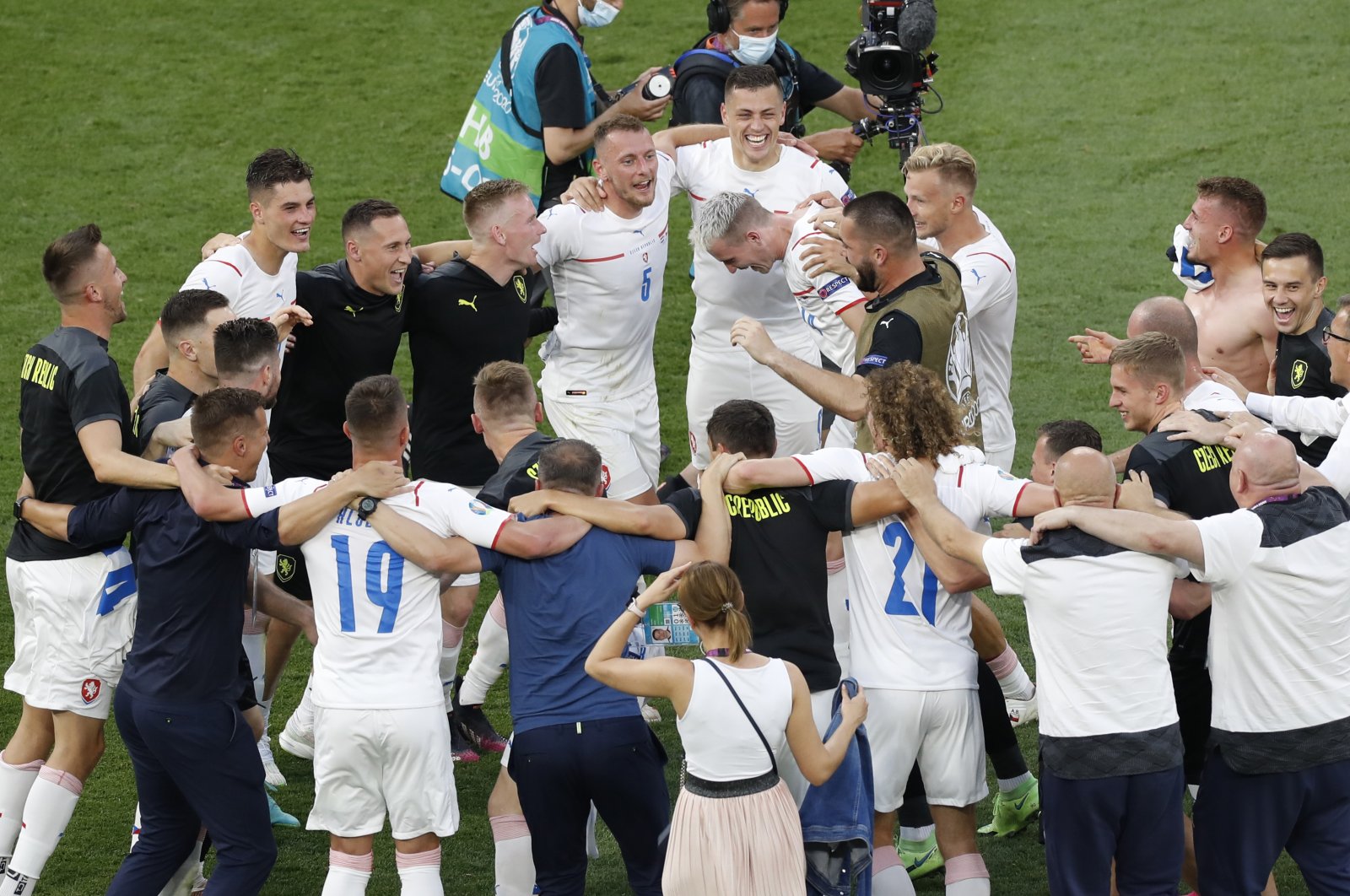 Czech Republic players celebrate winning their Euro 2020 round of 16 match between the Netherlands and the Czech Republic at the Ferenc Puskas Stadium in Budapest, Hungary, June 27, 2021. (AP Photo)
by French Press Agency - AFP Jun 27, 2021 9:00 pm
RECOMMENDED

The Czech Republic stunned a 10-man Netherlands side 2-0 to reach the Euro 2020 quarterfinals Sunday in Budapest.

The last-16 win came thanks to second-half strikes by Tomas Holes and Patrik Schick. A header by Holes and a clinical finish by Schick came after Matthijs de Ligt was sent off in the 55th minute, securing the efficient Czechs a deserved berth in the last eight against Denmark in Baku on July 3.

Having emerged as Group C winners with a 100% record after playing all three of its games in Amsterdam, Frank de Boer's fancied Netherlands were on the road for the first time in the tournament.

Roared on by boisterous ranks of orange-clad fans in a packed Puskas Arena, the only Euro 2020 venue not to limit stadium capacity as an anti-coronavirus precaution, it was the livelier Dutch who dominated the opening exchanges.

On eight minutes a floated cross by Danny Blind evaded Tomas Vaclik in the Czech goal but De Ligt's header across the goalmouth was sliced well wide by Memphis Depay.

Then Denzel Dumfries, raiding on both wings, was released on the left soon after but, with Vaclik again flailing, couldn't direct his header into the open goal.

But after soaking up the early pressure Jaroslav Silhavy's well-organized side, who qualified as one of the four best third-placed sides, began posing threats of their own with a series of dangerous counterattacks.

Tomas Soucek, who took over the captain's armband from the injured Vladimir Darida, glanced a dangerous header just wide at full stretch midway through the period.

Then Antonin Barak, fed by Lukas Masopust, blasted a left-footed effort high and wide when through on goal approaching the break.

Early in the second period, the advantage swung decisively the Czechs way when De Ligt was sent off by the Russian referee Sergei Karasev after a VAR review.

Bayer Leverkusen striker Schick, scorer of all three Czech goals in the group stage, put De Ligt under pressure, prompting the Juventus defender to blatantly knock the ball away with his hand to deny a goalscoring opportunity.

Midway through the half, with the Czechs scenting blood, Pavel Kaderabek should have got the opener while in space in the area but saw his shot blocked.

Then 68 minutes in a curled free-kick from the right by Barak was headed across goal by Tomas Kalas to the unmarked Holes who had time to place his header and spark bedlam among the Czech fans.

Ten minutes from the end Schick sealed the win with his fourth goal of Euro 2020, slotting home with his left foot at the near post after the rampant Holes pounced on a loose ball and laid on a clever cut-back.

In truth, a man down, the hapless Dutch never looked like catching the Czechs who were comfortable at the end, chalking up their fourth straight win over the Oranje in front of jubilant fans.