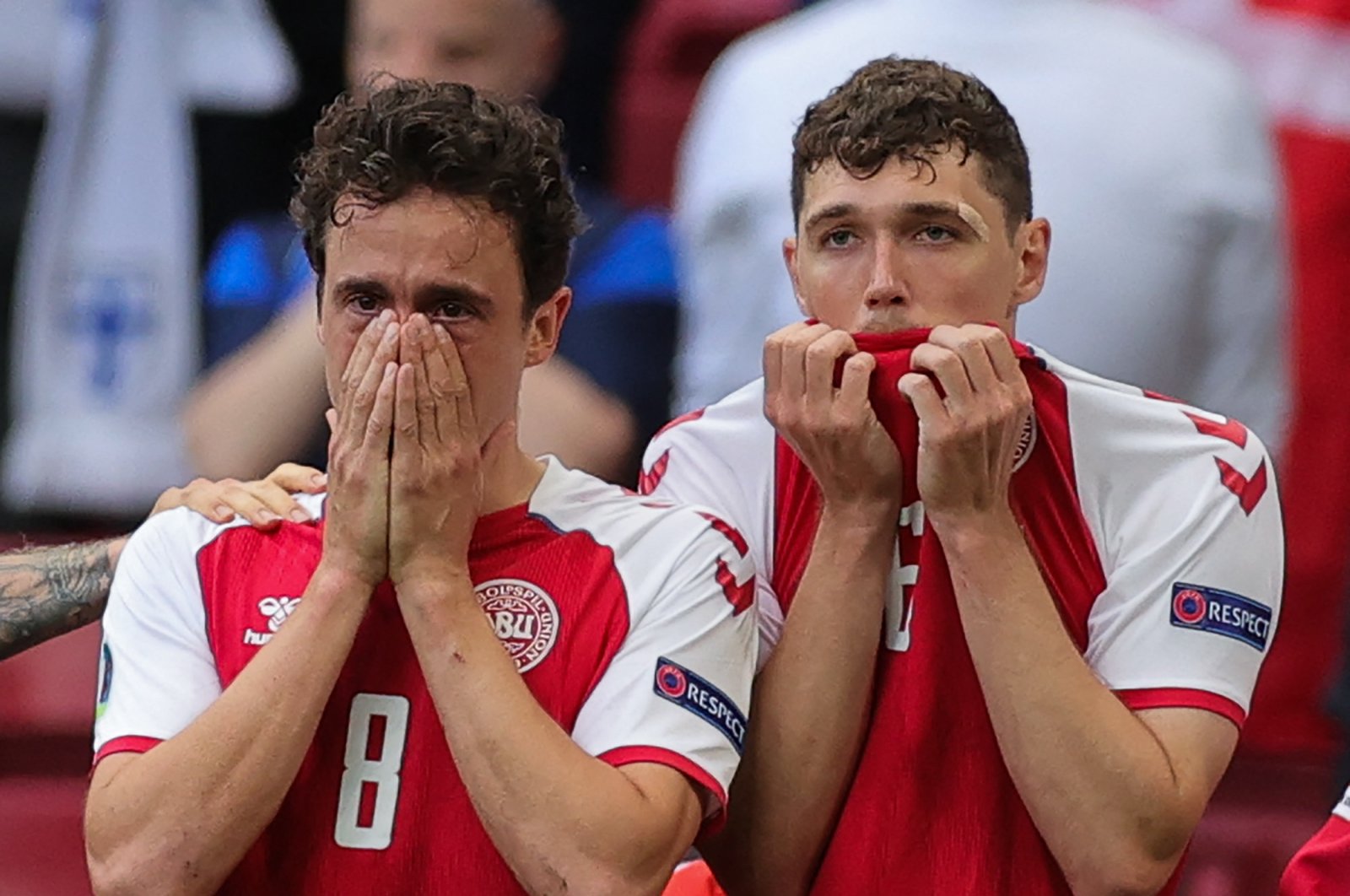 Denmark's midfielder Thomas Delaney and defender Andreas Christensen react as paramedics attend to Denmark's midfielder Christian Eriksen after he collapsed on the pitch during the UEFA EURO 2020 Group B match against Finland at the Parken Stadium, Copenhagen, Denmark, June 12, 2021. (AFP Photo)
by Agencies Jun 14, 2021 5:24 pm
RECOMMENDED

Denmark has seen an increased interest in CPR and defibrillators after Danish footballer Christian Eriksen's mid-match collapse against Finland in Euro 2020.

The tournament, with the national team playing all three of its group games at home in Copenhagen, was supposed to create a two-week party in the capital – with many hoping Denmark would be able to repeat its improbable triumph from the 1992 tournament.

But Eriksen fell face-forward onto the field with cardiac arrest during the team’s opening game against Finland on Saturday. And suddenly a large portion of Denmark’s 6 million people were watching live on TV as one of the country’s best-known athletes was given emergency CPR, his teammates standing around him with tears in their eyes.

"Rarely has it been less important whether a football match was won or lost,” Frederiksen wrote on Facebook.

Eriksen, widely regarded as Denmark's best player, was resuscitated with a defibrillator and was in stable condition in a Copenhagen hospital Monday.

But the national shock hasn't quite dissipated.

Eriksen's collapse remains the talk of the nation. Many wonder how it could happen to such a healthy player. And a debate is still raging over whether the game should have been called off. It was suspended for about 90 minutes before resuming, having been stopped near the end of the first half. Finland went on to score in the second half and won 1-0.

The interest among Danes in learning CPR and how to use a defibrillator has skyrocketed. A national organization that puts up defibrillators across the country said more than 640 people have volunteered to learn how to use one since Saturday – compared to 90 the previous weekend.

There also has been widespread anger in Denmark toward European football governing body UEFA for only giving the players the option of either finishing the game on Saturday evening or resuming on Sunday at noon instead.

The players themselves on Monday said they didn’t want to resume but thought it was better to finish Saturday than to come back the next day.

"It was not our wish to play,” Denmark forward Martin Braithwaite said. "We had two options and would have liked a third option. But we were told we had to make a decision ... There were many players who weren’t in a condition to play the match. We were in a completely different place.”

Another much-debated topic has been the impact on young viewers, who watched one of their sporting idols lying unconscious on the ground.

For unprepared children, seeing such pictures equals "a slap in the face,” said Ane Lemche, a psychologist with the Danish chapter of Save the Children.

"And children can also get confused because he looks quite lifeless and that is uncomfortable for a child," she told Danish broadcaster DR.

Boerns Vilkaar, a child counseling organization, posted advice for parents on its website, saying many children who watched were "scared, insecure and sad.”

The Danish football federation also tweeted a link to the organization's advice.

"Those kinds of pictures can be hard to get out of your head,” the organization wrote. "Some children may think about it a lot and be affected by it for a long time.”

Eriksen's agent says the Danish player is in "good spirits" but anxious to find out the cause of his cardiac arrest during his country's opening Euro 2020 game in Copenhagen.

"We spoke this morning (Sunday). He was joking, and in good spirits, I found him well," Martin Schoots told Italian newspaper Gazzetta dello Sport on Monday.

"We all want to find out what happened, him included. The doctors are conducting detailed tests, it'll take time."

"He was gone, and we did cardiac resuscitation," doctor Morten Boesen told a press conference.

"How close were we? I don't know. We got him back after one defib (defibrillation), so that's quite fast," Boesen added.

Schoots said Eriksen had been lifted by "all the love around him".

"Messages have arrived from all over the world," the player's agent told the paper.

"And he was especially touched by those from Inter, not only from his teammates but also the fans."

He added: "Half the planet has been in touch with us, everyone is worried.

"Now, he must simply rest. His wife and parents are with him."

Italy, in the meantime, will introduce mandatory first-aid courses for professional footballers in the wake of the collapse of Eriksen.

Italian football chief Gabriele Gravina said Monday at Italy's Euro camp in Florence that all players from the top three divisions would have to take part in such courses.

He also said the national team players would have the first courses during the Euros which run until July 11.

Gravina referred to Eriksen's teammate Simon Kjaer, who was the first to respond to Eriksen's collapse, clearing his airways and turning him on his side before medical personnel arrived.

"What happened there shocked us all," Gravina said. "I want to pay tribute to Kjaer's effort. He was decisive and so we can hopefully see Eriksen on the pitch again in the future."