European football wraps up a season like no other 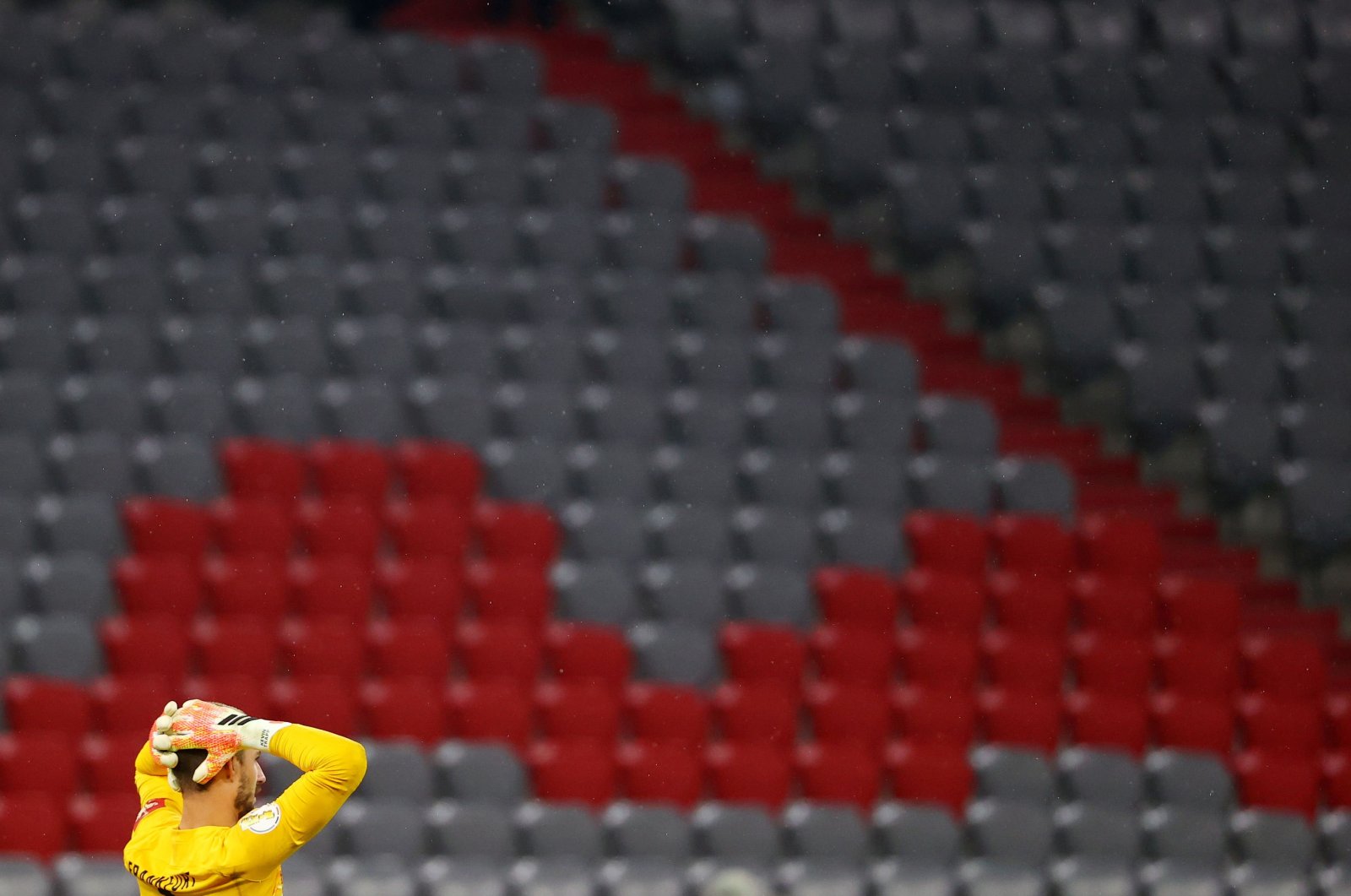 Thought impossible during the height of the COVID-19 pandemic, football leagues across Europe managed to finish their seasons even if they lacked the glitz and glamour of yesteryears

Matches behind closed doors, muted trophy celebrations and financial difficulties marked the 2020 season for football, as the coronavirus outbreak introduced unprecedented challenges to the sport.

What began as postponement of several matches in Italy’s Serie A in late April, quickly turned into a foreshadowing of what was to come for European football.

Many believed football wouldn't return to the continent for a long time during that period, as the outbreak situation only deteriorated over time. But the worst scenarios did not come to pass, and with the exception of a few, almost all leagues finished their seasons and crowned their champions.

Here's a look at how European leagues survived their longest seasons under the shadow of the coronavirus outbreak.

Almost immediately after suspending the league on March 13, Germany quietly began preparing for the restart.

At one point the restart looked doubtful after positive tests came back for players or staff at first-division club Cologne and second-division teams Dresden and Erzgebirge Aue. Polls consistently showed most Germans were opposed to the restart. Detailed planning by the league for testing and training helped convince key politicians.

Bundesliga's virus testing and medical protocols formed a blueprint for other leagues and sports around the world.

But when the Bundesliga restarted on May 16, it was more than a month ahead of other major European leagues. Unlike most other European countries, Germany also restarted the women's league, won by Wolfsburg.

The results were much like any other recent season. Bayern recovered from early-season troubles to win its eighth straight title with two games to spare, then held a muted party in private without players' families and the usual beer-throwing antics. Dortmund fought hard with an exciting young team but fell short.

German police, like those in England and elsewhere, feared fans would gather around stadiums and spread the coronavirus.

Instead, German fans have mostly followed the rules and watched at home, as shown by record audiences for broadcaster Sky on the first weekend back. Bayern's title win also did not prompt the kind of street partying seen in England after Liverpool's long-awaited championship.

La Liga was the second major league to return after Bundesliga and the Spanish league’s longest season ended on July 19, more than 11 months after it began on Aug. 16, 2019.

Resuming play on June 11 after all matches were called off on March 23, the 11-game sprint ended with Real Madrid clinching its 34th La Liga title.

The one match most synonymous with fans in Spain was the first to kick off without any as La Liga returned from its three-month suspension with Sevilla against Real Betis. The usually hot, fiery, frenetic Seville derby became the test case for Spanish football in front of empty stands as the game began to adjust to the new normal after the coronavirus pandemic.

At the top of the table, teams responded differently following the stoppage caused by the coronavirus pandemic. Madrid thrived and won the title, while Barcelona struggled and finished second.

And the virus-hit season could mark the first time in more than a decade Barca could finish the year without a major title if the Catalan side fails to win the Champions League.

While La Liga has reached a conclusion, Spanish football’s perfect comeback was tainted by an outbreak in the second division.

Fuenlabrada, fighting for a berth in promotion playoffs, saw its spot awarded to Elche after the second-tier club had more than 28 cases of coronavirus cases among its members.

Shortly after the incident, Spain's sports council released a statement in which it praised the success of football’s return but also expressed its concern with what happened with Fuenlabrada. It accused the league and the club of not following protocols as the team should not have traveled for the match after some members had already tested positive for the coronavirus over the weekend.

A day after La Liga’s restart, football returned to Turkey as well.

After the matches resumed, the Süper Lig quickly proved it had the most dramatic season, even if it lacked the star power of the other European leagues.

During the eight-match period after the restart, fans witnessed a breathtaking rivalry between Trabzonspor and Başakşehir, which culminated with the latter becoming the sixth club ever to win the title in the league’s history.

Defending champions Galatasaray lost its ticket to the Europa League at the very last match, while Fenerbahçe suffered another horrendous year.

But it was not only the matches that were dramatic. Just like Bundesliga, the Süper Lig’s return was in serious doubt at one point after numerous clubs reported virus cases among their ranks.

But despite the cases, the measures decided by the Turkish Football Federation (TFF) proved appropriate as no major incidents occurred once the play resumed.

Even though Başakşehir had to lift the trophy at an empty stadium due to virus restrictions, many felt the club did not lose too much as it never had a noteworthy fanbase to begin with.

The final whistle blew on the longest English Premier League on July 26, 352 days after it began.

When the league was suddenly halted during the second week of March, after Arsenal and Chelsea reported coronavirus cases, Liverpool was two wins away from its first English title in 30 years.

Jurgen Klopp and his men went on to win Liverpool’s 19th Premier League title, with a record-setting seven games remaining.

The return of the world's richest league has not been flawless. Empty stands have seen matches played out to the echoes of players' cries to each other rather than the atmosphere generated by full houses.

Water breaks in each half, even in matches played in rainy English conditions, and the chance for each side to make five substitutions have further disrupted the flow of a league that often sells itself on a fast-paced product.

But amid the backdrop of financial ruin that canceling the season would have caused, those imperfections and a few drab matches were worth living with for most.

Rules restricting the number of people allowed in stadiums to 300 meant Liverpool had to lift the Premier League trophy in an empty Anfield.

However, some of the concerns over football's return were realized as fans in Liverpool and Leeds ignored pleas to stay away from stadiums to celebrate their long-awaited title triumphs.

A total of 13 arrests were made outside Anfield and Elland Road as thousands gathered on the night that both the Premier League and Championship trophies were presented.

The scenes were condemned by the clubs and authorities, with Premier League CEO Richard Masters describing the scenes of mass gatherings of celebration in Liverpool last month as "regrettable.”

Serie A was the last of the bunch to return, as Italy was the worst-hit country among European nations.

Professional football returned to Italy on June 20 after a three-month lockdown, with matches played behind closed doors amid stringent protocols and tests, just like the other leagues.

Juventus entered the virus-forced break with a one-point lead over Lazio in what was expected to be a two-way fight for the title, but the Roman club struggled for much of the restart, and Juventus proved itself to be the dominant force of Serie A once again.

Coach Maurizio Sarri, helped by Cristiano Ronaldo’s unstoppable force at age 35, led Juventus to its record-extending ninth Serie A title in a row.

Despite Serie A still having two more weeks to go before its over, much of the table is already set. Inter, Atalanta and Lazio secured their spots in next year’s Champions League.

The only worthwhile action will happen further below, where Roma, Milan and Napoli will fight to win a ticket for the Europa League.

But it’s not all roses for Serie A it seems, as the Italian Football Federation (FIGC) president already sounded the alarm for the next season, calling virus protocols impossible to apply in the long term.

“We have applied the protocols in an emergency situation for a very short period of time, but continuing to apply it until the end of the next sporting season, with tests every four days, would be impossible,” FIGC President Gabriele Gravina said.