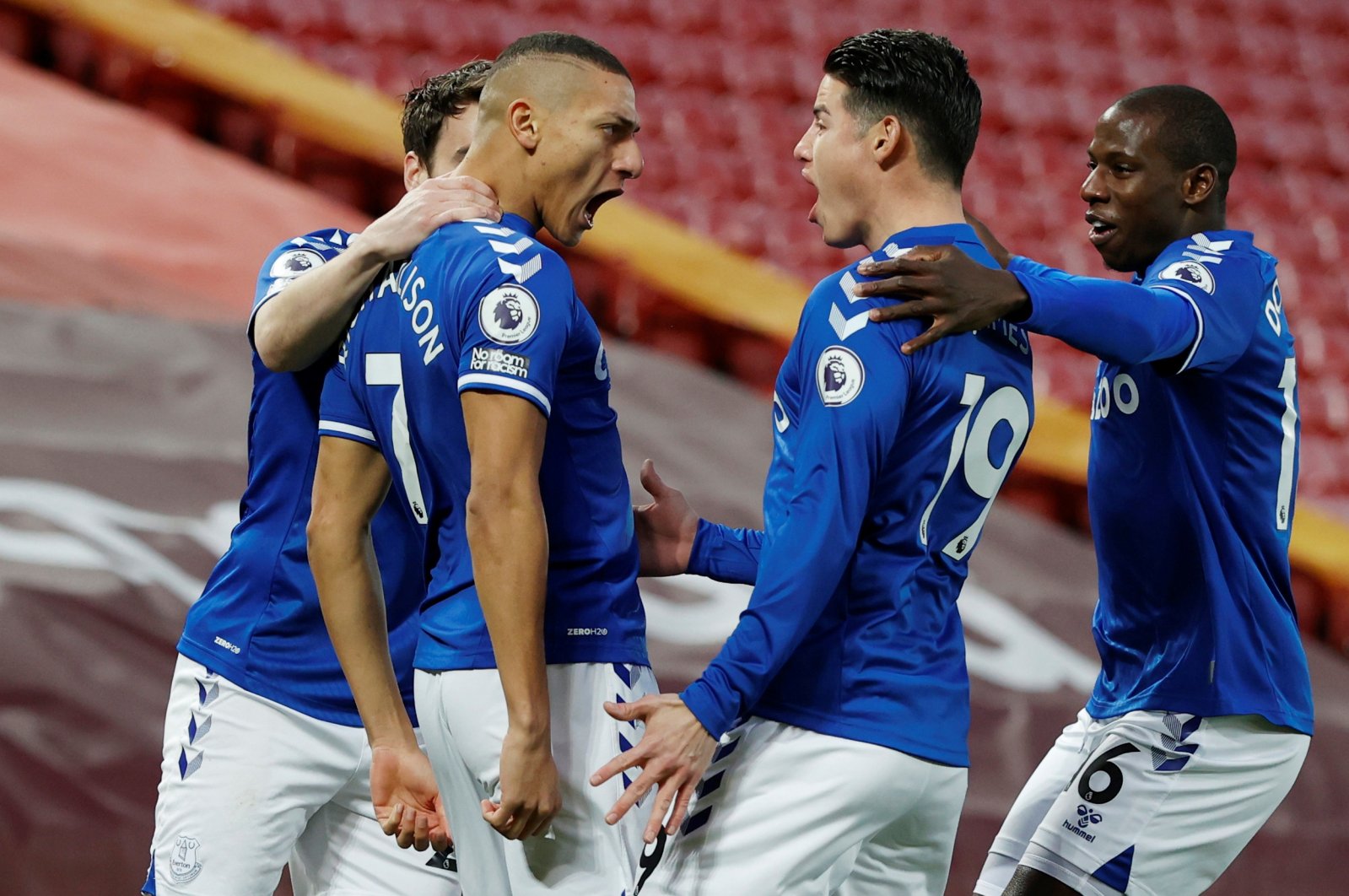 Twelve months ago Liverpool was ripping up the record books on the way to its first English top-flight title for 30 years but defeat by Everton on Saturday left it mulling a host of far less flattering statistics.

Its 2-0 defeat at Anfield was the first loss at home to city rivals Everton since 1999 and was a fourth home league defeat in succession – something it has not experienced since 1924.

Manager Juergen Klopp's hopes of retaining the Premier League crown were already effectively over after a spectacular drop in form since defeat by Burnley ended a 68-match run without a home league loss.

But Everton's win – courtesy of a third-minute goal by Richarlison and a controversial penalty scored by Gylfi Sigurdsson – means Liverpool is now in a scrap to even finish the season in the top four.

Everton's first win of any description over Liverpool since 2010 – after a run of 23 games without a victory – lifted Carlo Ancelotti's seventh-placed side level with the champions on 40 points although it has played a game less.

Liverpool remained in the sixth spot but is three points behind fourth-placed Chelsea who drew 1-1 at Southampton.

Chelsea trailed to a goal by Takumi Minamino but Mason Mount leveled with a penalty after the break.

West Ham United, who are fifth with 42 points, hosts Tottenham Hotspur on Sunday.

Fulham's hopes of avoiding relegation were given a huge boost as Ademola Lookman's 61st-minute goal earned it a 1-0 win over bottom club Sheffield United to move Scott Parker's side to within three points of 17th-placed Newcastle United.

West Bromwich Albion appears set to join Sheffield through the relegation trapdoor as it could only draw 0-0 at Burnley, leaving it 11 points from the safety zone.

West Brom played with 10 men for an hour after Semi Ajayi was sent off but it still had the best chances to win the game.

Few could imagine Liverpool's fall from grace after its title-winning season featured a plethora of English top-flight records, such as 24 successive home league wins and the best-ever start to a season in Europe's five top leagues – 26 wins and a draw from its first 27 games.

On Saturday, it became the first reigning champions to lose four successive home league games since Everton in 1928-29 as its chronic injury jinx struck again with skipper Jordan Henderson forced off early on.

"We stand here having lost 2-0. I know how important it is. We feel it deep inside," Klopp said. "But from tomorrow on I have to use all the good stuff."

Apart from a Champions League win over RB Leipzig in midweek, there is precious little good stuff for Klopp to use.

His side created plenty of chances against Everton but the cloak of invincibility it wore last season has disappeared.

Everton keeper Jordan Pickford made several world-class saves and Liverpool dominated for long periods after the break, but its luck appears to have run out – illustrated by the penalty that sealed the game.

Keeper Alisson made a great save from Dominic Calvert-Lewin before the Everton forward went down as he tried to leap over the grounded Trent Alexander-Arnold.

While it was despair for Liverpool, Everton can now dream of not only finishing above its rivals but also securing a place in the Champions League, although there is a long way to go.

"I am very pleased for the club and the supporters. I hope for sure that they are going to celebrate tonight," Ancelotti said. "It was a good performance. A lot of fight and spirit."