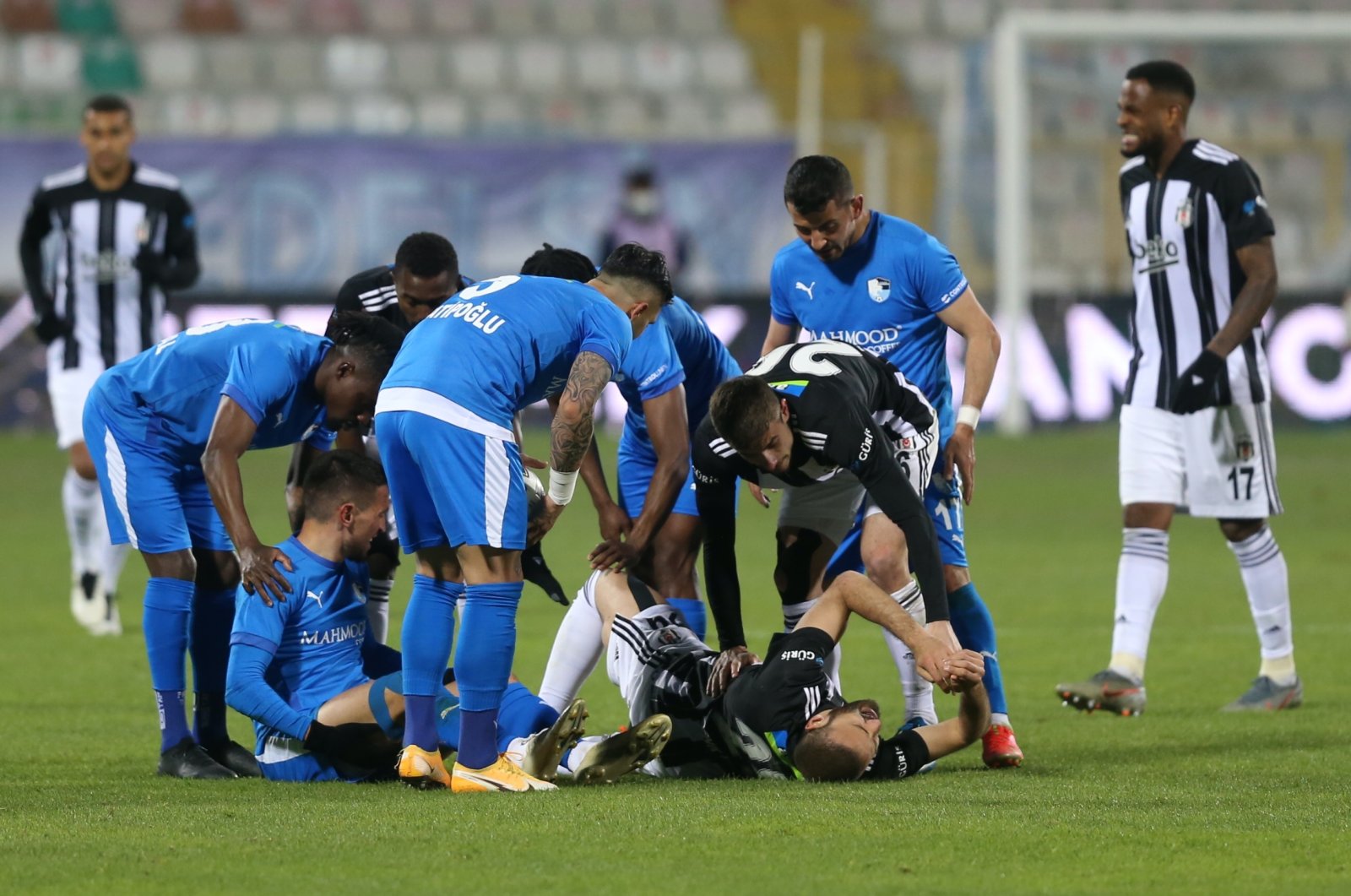 Beşiktaş and Erzurumspor players gather round forward Cenk Tosun as he lies in pain on the ground due to a knee injury, Erzurum, eastern Turkey, April 12, 2021. (AA Photo)
by Daily Sabah with IHA Apr 12, 2021 12:20 am
RECOMMENDED

Beşiktaş secured a crucial 4-2 win on Sunday in the 34th week of the Turkish Süper Lig to make it two in a row and to tighten its grip on the leadership, as it weathered bitter cold in eastern Turkey's Erzurum, but the evening was not entirely a joyous one for the Black Eagles as they lost their forward Cenk Tosun to a freak knee injury.

The match was a goal-fest as expected from Beşiktaş, and the Istanbul side did not disappoint as they battered the host BB Erzurumspor with four goals. Despite the final result, it was not an easy victory for Beşiktaş with particularly the first half being a back-and-forth.

The Black Eagles started the match with their foot on the gas with the first goal coming in at only 10 minutes after the first whistle, as Atiba Hutchinson at the edge of the penalty area found his Canadian compatriot Cyle Larin, and the 25-year-old striker with his first touch curled it beautifully into the top right corner.

Not six minutes had passed Erzurumspor responded from a corner with Leo Schwechlen heading in a cross by Emrah Başsan. In the 26th minute, the Black Eagles rose again to make it 1-2 as Oğuzhan Özyakup received the ball from Rachid Ghezzal and struck low onto Jakub Szumski's left and the Polish goalkeeper let it slip.

Beşiktaş keeper Ersin Destanoğlu returned the favor in the 39th minute as Başsan found the ball in front of him outside Beşiktaş's penalty area after Ghezzal failed to kick it away, and the Turkish winger produced a brilliant long shot which Destanoğlu unsuccessfully tried to punch away.

In the second half Ghezzal once again took the stage in the 66th minute as he dribbled past two opponents and struck it hard to give the lead again to Beşiktaş. Meanwhile, Cenk Tosun landed awkwardly in the 76th minute and had a knee injury, which reportedly will keep him sidelined for the rest of the season.

Finally, in the 86th minute, Gökhan Töre sealed the score with a beautiful pass from Georges-Kevin Nkoudou.

The result meant that Beşiktaş reached 70 points in the title race and now lead second-placed rivals Fenerbahçe with seven points, and the third-placed Galatasaray with eight.