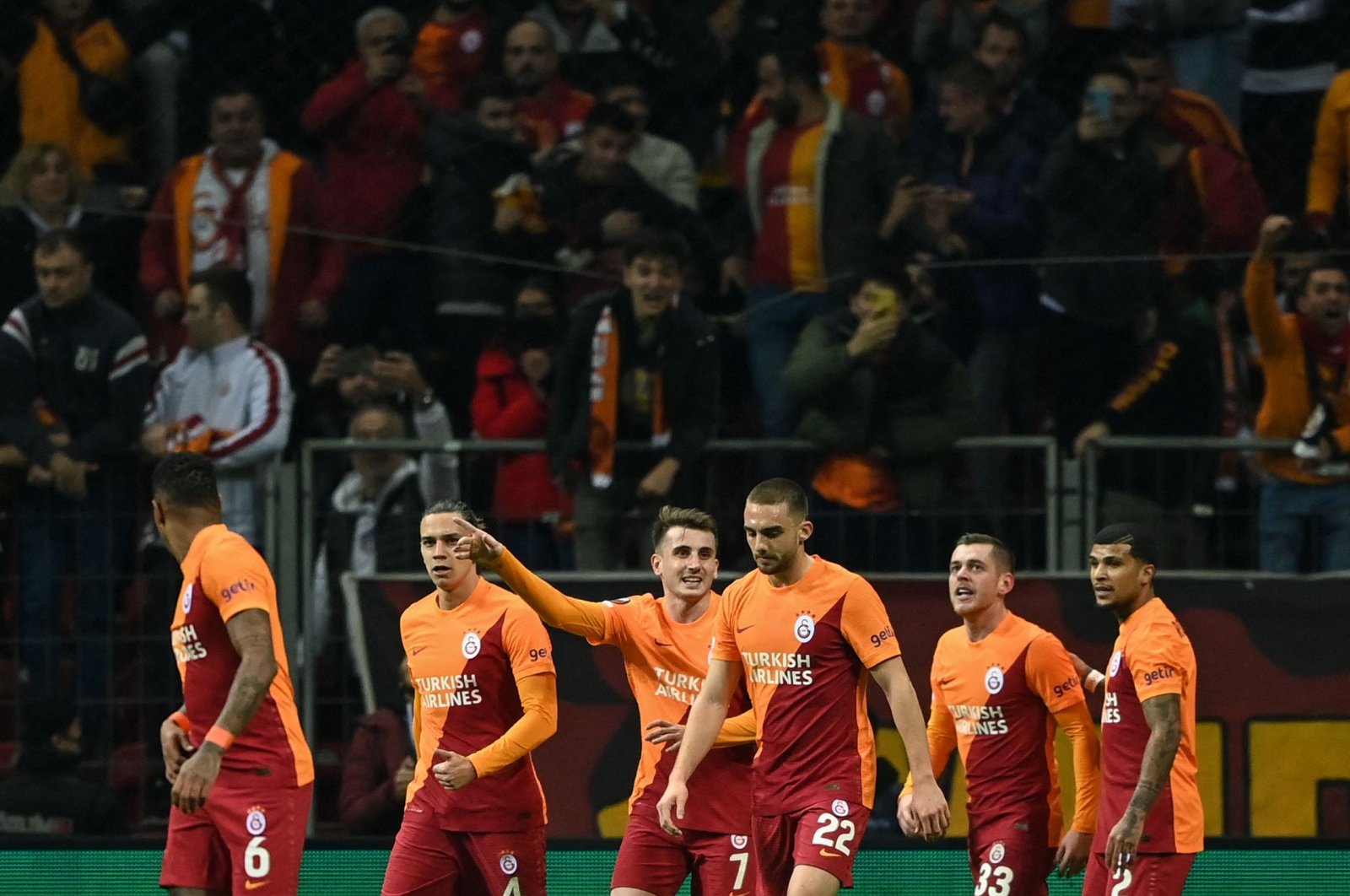 With a thrilling 4-2 win over Olympique Marseille, Galatasaray now holds a 3-point lead in Group E and a draw against second-placed Lazio can send it directly to the Round of 16

The Yellow-Reds, known for their 2000 UEFA Cup victory that marked a first in Turkish football, broke the deadlock with a close-range finish from Alexandru Cicaldau in the 12th minute at Istanbul’s Ali Sami Yen Sports Complex.

The Lions doubled the lead at the 30th minute with an own goal from Marseille's Croatian defender Duje Caleta-Car.

In the 64th minute, Sofiane Feghouli scored his team's third goal as Kerem Aktürkoğlu provided the assist for Feghouli.

In the 83rd minute, Marcao dribbled the ball on a counterattack to assist Dutch star Ryan Babel, who had come off the bench just seconds before.

Galatasaray currently has 11 points and holds a three-point lead over second-placed Lazio.

Lazio and Galatasaray will face off in two weeks' time for the top spot in Group E after securing qualification in style.

The Italians were 3-0 winners over Lokomotiv Moscow, who are set to lose head of sports and development Ralf Rangnick to Manchester United according to reports.

Marseille is in the third spot with four points, while Lokomotiv Moscow is bottom of Group E with two points.

Meanwhile, the other Turkish team in the tournament, Fenerbahçe, was eliminated after a 1-0 loss to Olympiacos.

The game was a drab affair in the first half as both sides failed to score.

However, Tiquinho Soares struck a late goal in the second half in the 89th minute to give the Greeks a narrow win at the Georgios Karaiskakis Stadium.

With the win, Olympiacos qualified for the knockout rounds from Group D with nine points and a match in hand. Fenerbahçe, in the meantime, will continue its European journey in the lower-tier Europa Conference League.

In the other Group D clash, Eintracht Frankfurt drew 2-2 with Antwerp at home to top the group with 11 points, taking it directly to the last 16.

Elsewhere, Giovanni Van Bronckhorst got off to a perfect start as Rangers manager as a 2-0 win over Sparta Prague secured its place in the last 32 of the Europa League, while Leicester edged towards the knockout stages with a 3-1 win over Legia Warsaw.

But Celtic's chances of progress were ended by a late Bayer Leverkusen rally from 2-1 down to win 3-2 in Germany.

Real Betis, Lazio, and Monaco also qualified for the knockout stages on Thursday.

Van Bronckhorst watched on from the stands as Rangers suffered a shock 3-1 defeat to Hibernian in Sunday's Scottish League Cup semifinal.

But in his first match since formally succeeding Steven Gerrard, Rangers got the two-goal victory they needed to guarantee second place in Group A, thanks to early goals in both halves from Alfredo Morelos.

Leicester will travel to Napoli in two weeks' time knowing a point will be enough to progress after a first-half blitz of Legia.

Patson Daka, James Maddison and Wilfried Ndidi all scored inside 33 minutes against the Polish champion to jump from the bottom of the group before kick-off to the top.

All four sides still have the chance to qualify in the final games of the group as the Foxes lead Napoli and Spartak Moscow by a point with Legia one point further back.

Celtic has gap to bridge

Celtic will have to settle for a place in the Europa Conference League in the new year after letting the lead slip in Leverkusen.

Robert Andrich headed the host in front before Josip Juranovic equalized from the penalty spot.

Jota's sweet strike 11 minutes into the second half had Celtic on course for its first-ever win on German soil.

But Andrich smashed home his second of the game between Joe Hart's legs before Moussa Diaby beat the former England international from the edge of the box.

"It was disappointing for the players as they put in a massive effort, but there's still a gap between us and them, and that's what we need to bridge," said Celtic boss Ange Postecoglou.

Betis made sure of second place in the group behind Leverkusen thanks to a 2-0 win over Ferencvaros.

Andriy Yarmolenko and Mark Noble were on target for the English side.

Real Sociedad needs to beat PSV Eindhoven at home in two weeks' time to go through after losing 2-1 to Monaco.

Goals from Kevin Volland and Youssouf Fofana secured a place in the last 16 for the French side thanks to winning the group.

PSV was 2-0 winners over Sturm Graz to move two points clear of Sociedad in the fight for second.