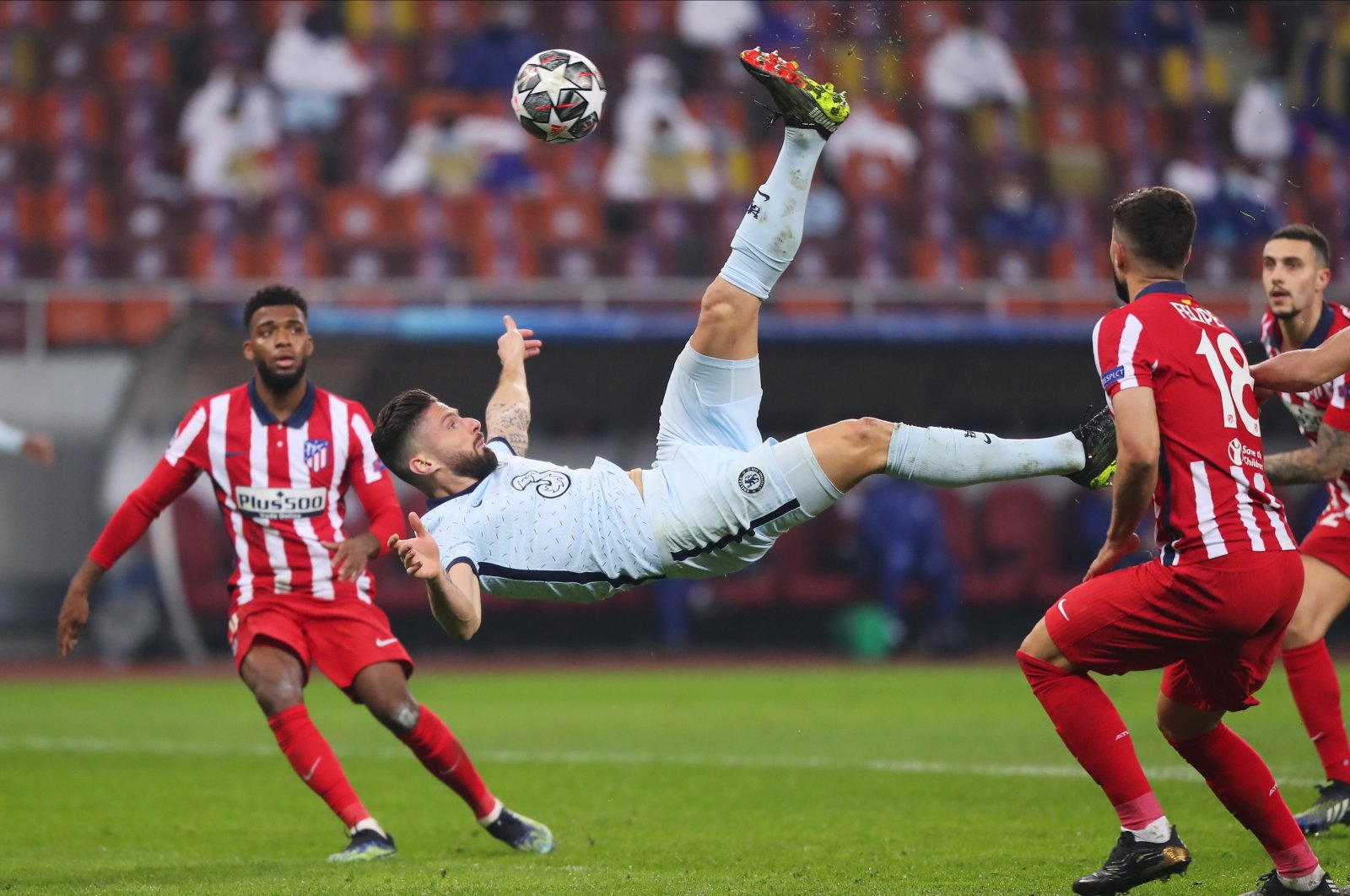 The French striker broke the deadlock in the 68th minute with an outrageous bicycle kick which was flagged offside but eventually given following a lengthy VAR review as the ball had come off Atletico's Mario Hermoso before Giroud hit it.

Joao Felix had attempted an overhead effort earlier in the second half but missed the target in one of few chances for Atletico, who was forced to play its home leg over 3,000 kilometers from Madrid due to Spanish restrictions on arrivals from Britain to control the spread of COVID-19 infections.

Chelsea looked more likely to find a second goal than Atletico did an equalizer but Thomas Tuchel's side will be without Mason Mount and Jorginho in the second leg at Stamford Bridge on March 17 as they will be suspended after being booked.

Atletico has led the La Liga standings for most of the season but has experienced a dip in form in February and went into Tuesday's match smarting from a shock 2-0 defeat at home to Levante after drawing two of its previous three games.

Deprived of the usual raucous atmosphere it would normally expect for a European knockout game at the Wanda Metropolitano and forced to take a four-hour flight to the game, there was little sense of them having a home advantage.

It played with little ambition or intensity and could not manage a single shot on target to bother Chelsea keeper Edouard Mendy.

Chelsea played with more confidence and purpose and was only let down by its final pass.

Luckily, it could count on the improvisation of Giroud when Hermoso's attempted clearance sent the ball looping backward and within range of the Frenchman.

In Rome, Robert Lewandowski became the Champions League’s third top scorer of all time as holder Bayern Munich put one foot in the quarterfinals with a 4-1 thrashing of Lazio.

The Polish striker pounced on a poorly judged back pass after nine minutes to steer in his 72nd goal in the competition.

In doing so, he surpassed former Real Madrid striker Raul in the competition scoring charts to reach a total only bettered by Juventus' Cristiano Ronaldo, with 134 goals, and Barcelona’s Lionel Messi, with 119.

Bayern’s 17-year-old midfielder Jamal Musiala doubled the advantage with a well-taken strike that made him the youngest English player to score in the competition.

Leroy Sane tapped in a third before the break and a Francesco Acerbi own goal stretched the visitors’ advantage early in the second half, but Joaquin Correa soon pulled one back for Lazio, whose unbeaten run in the competition came crashing to an end.

It was an 18th consecutive match without defeat for Bayern in the Champions League, 17 of which have been victories, leaving the German champions in a dominant position ahead of the second leg in Munich on March 17.

Bayern came into the game with a point to prove after earning one point from two league games since winning the Club World Cup earlier this month.

It soon demonstrated its pedigree against a Lazio side competing in its first Champions League knockout match since 1999.

Lewandowski anticipated a loose pass from Mateo Musacchio and rounded Pepe Reina to tap in, but Lazio was furious when penalty claims were waved away after Sergej Milinkovic-Savic was felled in the box.

England U-21 international Musiala, who is also eligible to play for Germany, fired into the bottom corner after 24 minutes.

Bayern then put the contest beyond doubt when Sane tapped in from a Reina parry and Acerbi diverted a cross into his own net either side of the break.

Lazio produced chances of its own, finishing the game with 14 attempts to Bayern’s 13, but Correa’s weaving run and finish was its only successful effort.